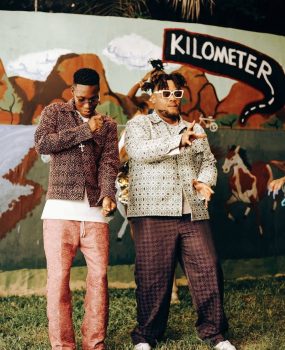 It was clearly not a large-budget video; however, the director was still able to spice things up a bit with the inclusion of some very well-executed angles and shots…

There’s a popular saying that fat kids love cake. Well, fat kids can sing and make good music as well. Remember the American-Jamaican singer, Sean Kingston, and American singer, Khalid? Bnxn, formerly known as Buju, is Nigeria’s version of those two. The singer hinted in his song, “Never Stopped” that he is a sprinkle of Khalid and Frank Ocean combined. A name change was in the offing, and it came shortly after with his change of name to Bnxn (pronounced as “Benson”).

Normally, should an artiste decide to change any aspect of their persona, brand or image especially a major part such as their name, it would automatically be considered career suicide. Only a handful have been able to successfully pull this off and were still able to retain their fanbase at the same time. The likes of Kiss Daniels who was compelled to change his name to Kizz Daniel after a long messy spat with his former label, G-worldwide, and then the legendary 2face Idibia as well, who, of his own accord, decided to change his name to 2baba are key examples. Fans have also made Bnxn’s case an exception, due to the love and affinity they have for the chubby-cheeked singer.

It now appears to be that when an individual is as talented as Bnxn, they could wake up one morning and decide to change their names to whatever they feel like, and fans would care less, and still patronise the artiste and remain loyal to them regardless as long as they consistently serve the good songs and materials they’re renowned for. Although, at first, his fans were a bit skeptical about his new direction with regards to his rebranding and name change, overtime, the name is now starting to grow on his fervent followers, and I dare say he has also been able to win over a few more fans along the way.

The “Testimony” crooner teams up with Marlians’ ambassador and serial hit-maker, Zinoleesky, for the remix of this Rexxie-produced banger, “Kilometer.” The song was published and distributed by Empire, and the video was directed by The Alien.

Every young, aspiring artiste looking to make a name for themselves in the Nigerian music industry should take a cue from Bnxn, not just because of his musical prowess but also for his entrepreneurial skills. The rave of the moment took a huge gamble with his decision to become an independent artiste after parting ways with Burna Boy’s Spaceship Records, and from every indication that gamble seems to have paid off. He recently disclosed on social media that becoming an independent artiste was the best decision he had ever made in his life.

If the current music veterans or OGs as they are often referred to in the music industry, were to pass the baton to any artiste, only a few names would pop up, and one of them would be the “Finesse” collaborator.

The “Kilometer” remix video starts off with a rather subtle, yet grandiose portrayal of Bnxn in a more serious, business-minded light, reclined on a chair while working on his laptop and drawing on a note pad what appears to be graphical illustrations of his Octa Fx’s financial graph, possibly denoting his current investment status with the company. At this point I said to myself, “oh no, I hope I’m not about to watch another bleeping commercial!” Luckily, things did not go further than that. It has become a norm these days for brands to flood music videos with adverts of their company’s logo or products, and this is becoming increasingly frustrating for fans and viewers. It is in many ways imposing on the fan, and could ultimately affect their perception of the artiste in the long run.

The “Shakara” video director was very clever with how he maximised to full effect the locations used in this visual by engaging viewers with various activities in order not to bore them. Kudos to him for that one. It was clearly not a large-budget video; however, the director was still able to spice things up a bit with the inclusion of some very well-executed angles and shots. The idea behind those very artistic designs used in covering the modes was also commendable. There were also some graffiti paintings in strategic places.

It’s a struggle for independent artistes to source funding to promote and market their craft, and understandably so. That’s where some of these brands come in, to provide some form of financial assistance under the guise of endorsements. Yet, they do so in exchange for a substantial degree of creative and administrative control over the artiste. Slave deal? Perhaps. The independent artiste must always remember that these brands or companies need them more than they need these brands. And while money is a very important tool needed for promotion, it should never be at the expense of the independent artiste’s full creative and administrative control. This aspect must never be compromised.

The video lasted for about three minutes and forty-four seconds (3:44), and in that entire duration, there were no expensive jewellry, nor flashy bling blings being displayed unnecessarily; just a simple and modest appearance from Bnxn, yet, very fashionable at the same time. Perhaps a lesson to the upcoming artistes: “save your coins. You don’t need to spend so much on expensive jewellry for you to get noticed. You’ll need lots of money for your promotion.” With the ensemble in this video, one could only imagine that it must have translated into some form of camaraderie and fun on set.

There were lots of exciting scenes to watch, all happening concurrently. I particularly enjoyed watching the group of adult males drum band playing the talking drum (or gangan) on set, and dressed in an all-white clothing, as Bnxn performed directly in front of them, like a lead vocalist performing alongside his band. These shots added some lustre to the video. The band was shown intermittently, in between subsequent scenes throughout the entire visual. This signifies that no matter how young a cast or group of creatives are, incorporating, strategically, some mature adults into their midst at times adds variety and spice to the visual. It also allows the product or content reach a more diverse and wider range of viewers or audience.

There were loads of fun activities on set as well: young folks playing basketball, and some table tennis, as well as three young ladies skipping and having fun. At 0:54 seconds playtime, the director took an overhead shot of people playing the musical chairs game, which is one of the best fun activities to get people entertained and engaged at any gathering like that. An overhead shot, as the name implies, is a shot simply captured by placing the camera somewhere around 90 degrees directly above the subject or scene where the particular action of interest is taking place. This type of shot is aso referred to as Bird’s Eye View.

One of my favourite clips of the video was taken at 01:35 seconds where Bnxn is seen performing the song while standing on a car in full motion. After watching that particular clip a number of times, I still couldn’t arrive at a conclusion whether or not it was a real shot, or it was captured and edited on a green screen. Another intriguing part for me was watching the serial hit-maker, Zinoleesky, a fashion train-wreck in his videos, decide to step things up a bit in his fashion department for this video, with what appears to be a matching purple track suit on a white T-shirt. Zinoleesky and Bnxn were an enviable pair in the video.

The Alien did a fairly decent job on this project; from the ensemble, to the beautiful set designs, and the colourful costumes used by the cast, including that of the primary artiste, Bnxn, as well.