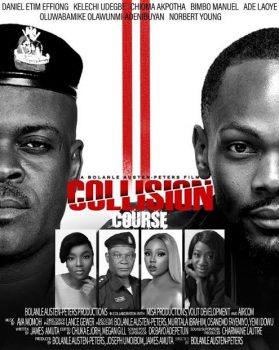 Valentine season is here, and the big day is almost upon us…

From attending the love feast in your church to booking out an entire hotel, there are a thousand and one ways to celebrate this season of love with your significant other. But if you’re a cinephile like I am, seeing a movie is probably sitting at the top of your list. For you, from Afrocritik, here are top seven Nollywood movies to see from now till the day the curtains close on this month of love.

Dinner At My Place 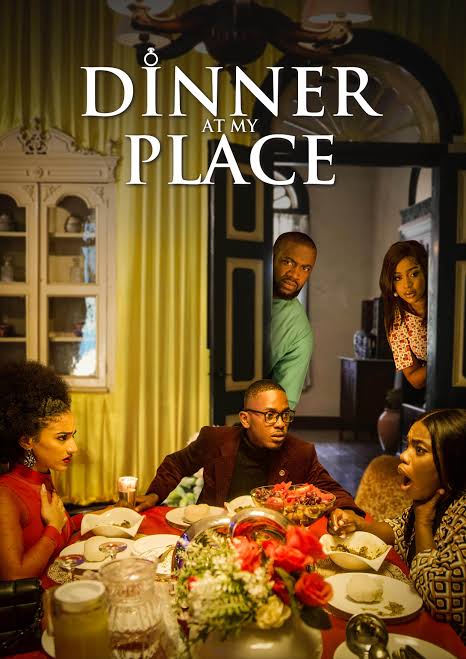 What better way to start this list than with a considerably lovey-dovey romantic comedy that will almost certainly have you hooked? In Dinner At My Place, Nonso plans the perfect dinner proposal that he hopes will end with his mother’s ring, worth 22,000USD, sitting pretty on his lover’s finger. But things take a hilarious turn when Nonso’s ex-girlfriend shows up at the dinner, and the ring seems to end up in the wrong woman’s stomach.

Written and directed by Kevin Luther Apaa, the film is a feature-length version of a 2019 short film by the same writer-director. And since this current take features the trio of Timini Egbuson (Superstar, Juju Stories), Sophie Alakija (Gone) and Bisola Aiyeola (Sugar Rush), it’s difficult to imagine it turning out to be a bad choice for your Valentine’s date. Dinner At My Place was released in cinemas on the 28th of January, 2022. 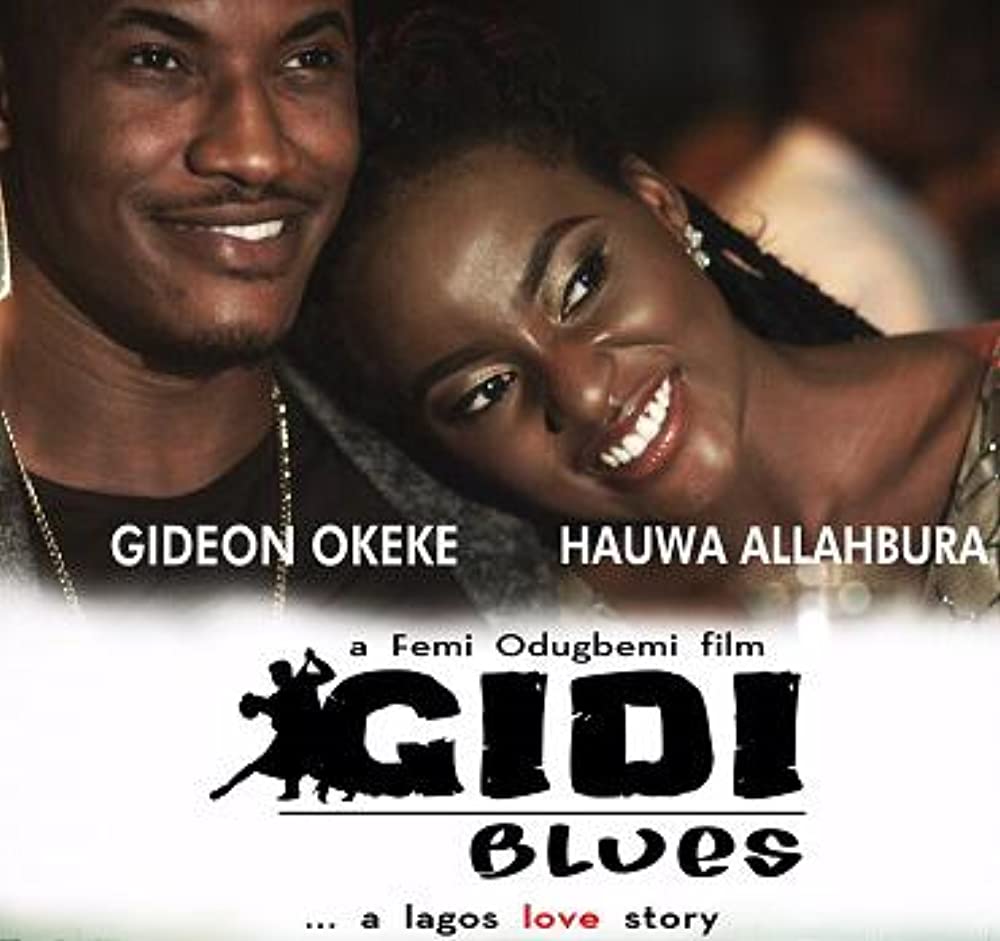 Your mates might be getting flowers while you sit at home, but you do not have to be lonely. It is perfectly fine to be alone with your favourite comfort food. And even if you’re getting flowers, but you really just want a Netflix-and-chill type of day, that’s fine, too. Either way, Netflix has got you covered with Gidi Blues, Femi Odugbemi’s 2016 romantic drama that recently made its way to the streaming giant’s platform.

Written by Taiwo Egunjobi and Femi Kayode, the movie is centred on a rich Lagos playboy who meets and falls in love with a conservative woman. It might rely on some infamous stereotypes, but an Afrocritik review called it “a full-time cinematic love story.” Plus, with actors like Gideon Okeke (When Love Happens), Hauwa Allahbura (The Eve), Nancy Isime (Superstar, Kambili, Hex), Tina Mba (For Maria Ebun Pataki, Fine Wine) and Bukky Wright (When Love Happens), it is definitely an interesting watch. Gidi Blues came to Netflix in the last week of January, 2022. 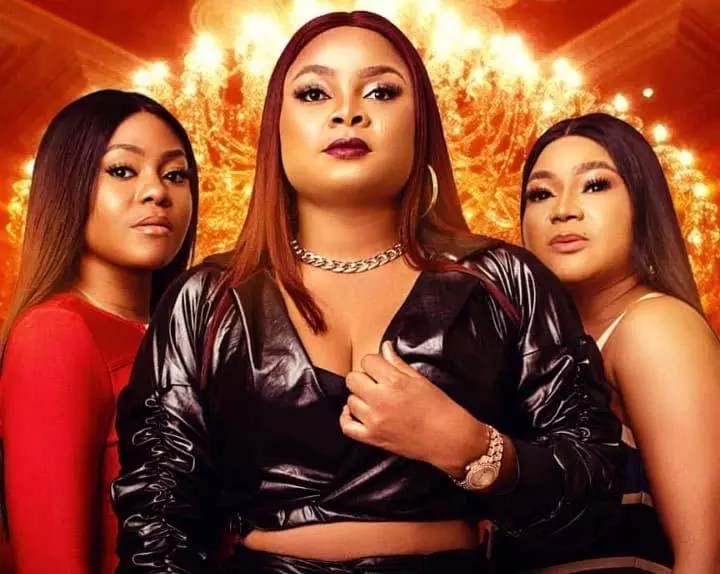 If you’ve been praying for another Bimbo Ademoye film to hit the cinemas, your prayers have been answered. In Head Over Bills, Ademoye (Gone, Hide ‘N’ Seek), Ego Nwosu (Fine Wine), and Rachael Okonkwo (Small Chops) play the parts of three spoilt daughters who find and lose love as they seek the approval of their wealthy businesswoman mother, played by the ever classy Shaffy Bello (Chief Daddy 2, 2 Weeks in Lagos). Directed by Dabby Chimere, Head Over Bills premiered in cinemas on the 4th of February, 2022.

This dramatic romantic comedy captures four love stories revolving around “characters who are all experiencing the trials of love, all before the most romantic day of the year, Valentine’s Day.” Between the colourful trailer with a lot of red, a “Married to Jesus” T-shirt, a diva in Uche Montana (Hide ‘N’ Seek), and a hair salon setting, the movie looks very promising. It certainly helps that it stars several Nollywood fans’ favourites. It’s exciting to see Meg Otanwa in a very different role after her critically acclaimed performance as a mother suffering from postpartum depression in For Maria Ebun Pataki. Shaffy Bello is still classy in this film.

If the ensemble cast is scary, no thanks to Chief Daddy 2 and all other bad star-studded movies, there is cause to hold on to hope. The movie is directed by Michelle Bello who also directed the 2013 hit movie, Flower Girl, and it is executively produced by Moses Babatope who had a hand in Kambili, and The Wedding Party. Hopefully, considering the handful of sponsors advertised on the trailer, the movie won’t fall victim to the plague of misplaced adverts.
Before Valentine’s premiers today, the 11th of February. 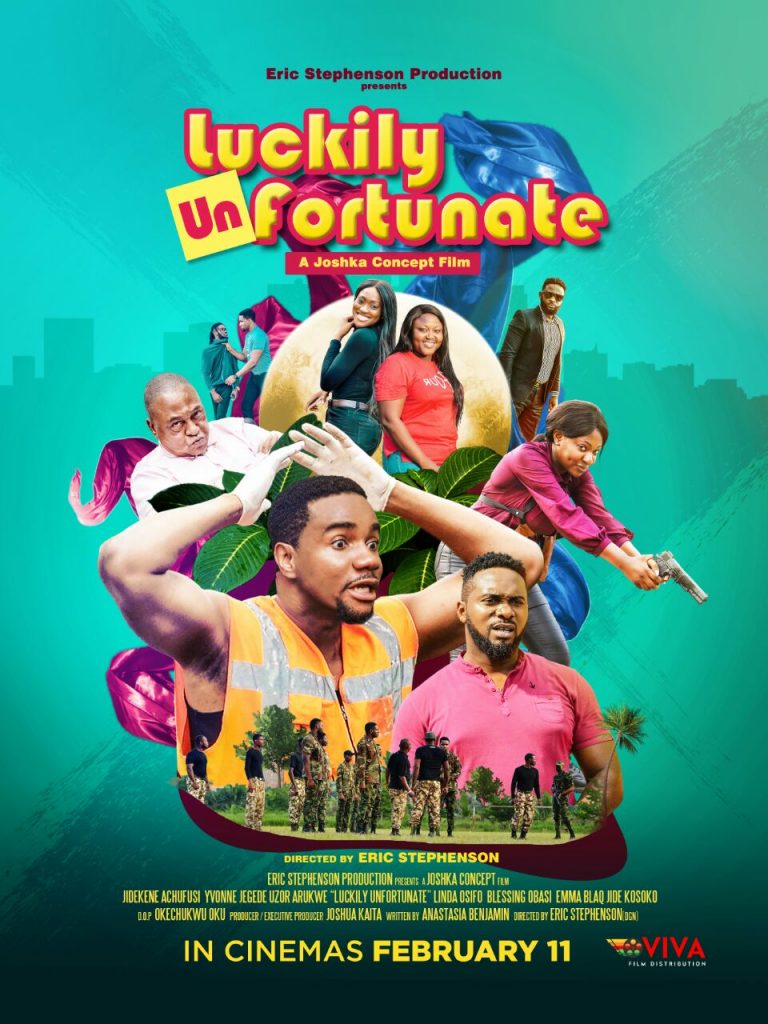 Since we met Jide Kene “Swanky JKA” Achufusi in Living in Bondage: Breaking Free, he has been consistent in delivering on his roles. In Luckily Unfortunate, JKA promises to deliver again, this time, as Josh, a man whose bad attitude won’t let him keep any job. But when he partners with a woman investigator at a new job, and his ex-girlfriend shows up with three children who she claims are not his but whom he agrees to take under his roof, he has to try to be better. Perhaps coincidentally, Uzor Arukwe, who recently starred as a man who had to take in three pregnant women in Tanwa Savage, is JKA’s best friend in this movie. 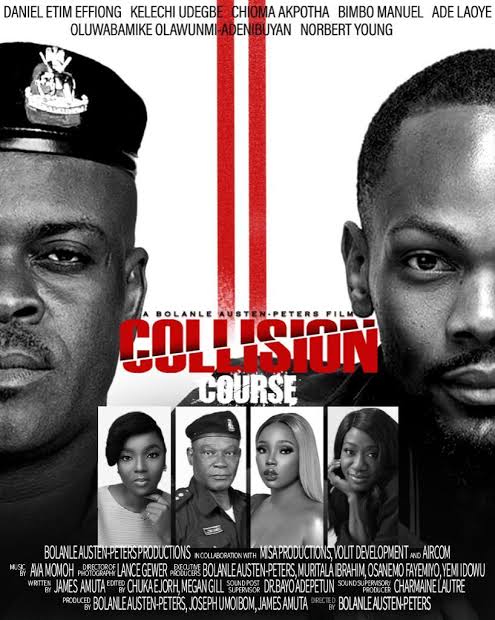 Honestly, this film’s theatrical release is long overdue. Collision Course was featured on Afrocritik’s “AMAA 2021 Nominations: A Guide to the Nominated Feature Films from Nollywood” after it earned four nominations at the AMAA Awards, 2021. It went on to win two of those nominations. Even before the AMAA nominations and wins, it was selected as the closing film for the Africa International Film Festival, an envious achievement—at least, going by the 4,000 other films that were submitted from over 100 countries.

Directed by theatre magnate Bolanle Austen-Peters, it has the 2020 Nigerian anti-police brutality protests as its inspiration. And for their roles in this film, Kelechi Udegbe won the AMAA Award for Best Actor in a Supporting Role while Oluwabamike Olawunmi-Adenibuyan (Big Brother Naija’s Bam-Bam) received a nomination for Best Young/Promising Actor.

Collision Course is no romantic drama, but it is a film you should definitely watch for love of your country. Plus, it starts showing in cinemas on Valentine’s Day, the 14th of February.

The last time a food-related romantic drama graced the Nollywood big screen, it was the beautiful AMAA-nominated This Lady Called Life. Up next is Cake, a Prosper Edesiri film about a talented baker who tries to win his dream woman with a cake recipe but gets caught in a love triangle. The movie features a decent cast of Tope Tedela (Finding Hubby), Sophie Alakija (Gone), Folu Storms (Charge and Bail), Patience Ozokwor (Chief Daddy 2), and Big Brother Naija’s Saskay in her debut feature film role.

Cake is set to premiere in cinemas on February 25.