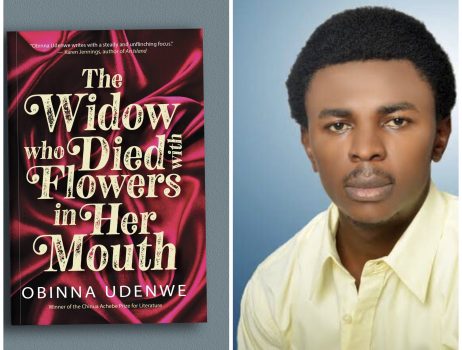 The Widow Who Died with Flowers in Her Mouth  is set to be published in 2023 by Masobe Books.

Nigerian writer, Obinna Udenwe’s new short story collection titled The Widow Who Died with Flowers in Her Mouth is set to be published in 2023 by Masobe Books in Lagos, Nigeria.

The publisher noted that the author’s first collection, “gives readers an unvarnished look at the country and its people in all of their thrilling, titillating, and terrible glory.”

“Ordinary people find, and fashion themselves into and within far-from-ordinary situations in The Widow Who Died with Flowers in Her Mouth. A beautiful woman’s half-naked body is discovered to the shock of her community; but is the killer one of her wealthy suitors? A plumber is treated to an intense sexual experience by a woman with cash, curves, and killer moves—but is she who he thinks she is? A young doctor reaches the edge of sanity after a forbidden entanglement with a married woman. A sexually promiscuous tailor’s return to her father’s house immediately sparks lust, jealousy, chaos, and violence.”

Obinna Udenwe is a writer, a civil engineer, a farmer, and the founding editor of the Village Square Journal. He is the author of Colours of Hatred (2019), Holy Sex (2016) – a dark and humorous tale that breaks the silence around the Nigerian church as an erotic space, and Satans & Shaitans (2014) –  a powerful story about love, politics, power, religion, terrorism, and corruption which tells the story of two powerful men, Chief Donald Amechi and Chris Chuba, both members of an internationally renowned occult, the Sacred Order of the Universal Forces. Members of the occult from Southern Nigeria, desperate to gain control of their country, deceive an Islamic terrorist organisation into carrying out attacks in order to undermine and overrule the Nigerian President.

His stories have appeared in various international publications platforms some of which includes; Gutter Magazine (an award-winning, printed journal for fiction and poetry from writers born or living in Scotland and featuring literature from around the world) , Brittle Paper(an online literary magazine for readers of African Literature), The Village Square Journal(a magazine of contemporary world literature, arts and politics), Munyori Literary Journal (a Zimbabwean-American literary platform that features works from global writers and artists, Prairie Schooner, and others.

If you love this, click here to read more on Afro entertainment, Arts, Literature and Culture by Afrocritik.

obinna udenwe The Widow Who Died with Flowers in Her Mouth