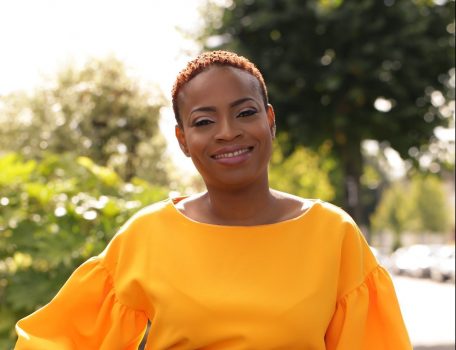 In Abi Dare’s “The Girl with the Louding Voice,” Language Plays a Foremost Role in Storytelling

Abi Dare’s debut novel, “The Girl with the Louding Voice,” recently a finalist for The Nigeria Prize for literature, is arguably the most popular novel from Nigeria since 2020. Since its publication in February 2020, the novel has been shortlisted for the Desmond Eliot’s Prize for debut novelists, gotten on The New York Times Bestseller—and was later shortlisted for the Nigeria Prize for Literature, reaching the shortlist alongside Obinna Udenwe’s “Colours of Hatred” and Cheluchi Onyemelukwe’s “The Son of the House.”

“The Girl with the Louding Voice” follows the story of Adunni, a young girl given to marriage at the tender age of 14 to Morufu, a much older man by her poor and reckless father. Adunni’s life for most of the book was shadowed by sadness and the loss of her mother, her more responsible parent. This paved the way for the various sufferings Adunni was to undergo, including her early marriage, and its attendant problems.

Apart from sadness, Adunni’s consciousness was filled with her dreams of going to school and becoming a teacher. It was this dream, like a stubborn fire which refused to be put out, that guided Adunni who emerges as a true heroine.

The story is written in first person, in the voice of the protagonist, Adunni, with a combination of broken English, proper English, and Nigerian pidgin. This produces a hybrid language, familiar to the pidgin speaker, as well as humorous to the native English speaker. The book’s language is its main triumph, making up for the book’s predictable plot, and serves as an integral mirror into the protagonist’s personality.

It espouses Chinua Achebe’s words in his essay “The African Writer and The English Language” where he said, “The African writer should aim to use English in a way that brings out his message best without altering the language to the extent that its value as a medium of international exchange will be lost. He should aim at fashioning an English which is at once universal and able to carry his peculiar experience.” Abi Dare succeeds in “The Girl with the Louding Voice” in making the English language surrender to her use, and to carry her familiar experience.

The deliberate English language corruption derivable from the novel’s narration is in contrast to the English used by writers like John Munonye, Ngugi Wa Thiong’o, or contemporary writers like Jennifer Makunbi, which is reflective of grammatically accurate English but derived from a translation or transliteration of local language. The by-product is reflective of the writer’s ability to combine both strains of broken English and proper English to produce a language which relays her protagonist’s state of mind.

The most creative thing about the language is how it does not follow the rule of grammatical correctness, a form of disobedience, which according to E. B White was the hallmark of style. Joan Acoccella, in a The New Yorker essay in which she discusses the historical arguments of how the English Language should be used, refers to how E. B White wrote, after listing so many rules on how to approach style, that the main hack to style was not only to follow rules, but to have an ear for how things should be, which in itself, transcends conventional rules.

The biggest achievement of “The Girl with the Louding Voice” is how it breaks the rules of grammar to create a new language for its own purposes.

The novel explores the education, alongside sub-themes of early marriage, marital abuse, love, perseverance, friendship, and death, as components of the story of its major character which begins from the small village of Ikati and moves to Lagos. The story is a progression where the protagonist moves from rural to urban realities, from speaking broken to better English. One of the triumphs of this book is the psychological placement of Adunni in the book. Reading the book, we could actually see how her sensibilities and thoughts grow according to her progression in life.

There was no error of the 14-year-old protagonist sounding any older, or the characters speaking out of order. Rather, in between the protagonist’s touching experiences, her conversation with other characters, her ability to move from one disappointment to another without losing sight of her dream, and the unconventional but easy language in which the book is written, the work is captivating. The story partly reveals the power of language in storytelling—buttressing the point that it is not just about what is written, but how it is written.

It is right to say that “The Girl with the Louding Voice” is didactic in how it handles the issue of the girl child. At some point, Adunni cries out, “I want to ask, to scream, why are the women in Nigeria seem to be suffering for everything more than the men?” And the book in itself is the kind an author writes in hope that it inspires the girl child to aspire to formal education. Even the title, “The Girl with the Louding Voice” toes a symbolic line along education and the boldness it instils in one to challenge toxic norms.

The book postulates that education gives the recipient a “loud voice.” However, the seemingly naïve and utopic premium the novel places on formal education is a far cry from the reality in present-day Nigeria where education is no longer a guarantee to having a loud voice, as is proximity to power and influence. More creative literatures should be written to explore the reality of young people in the Nigerian quota-based and mediocre education system which produces many voiceless and confused young school leavers.

“The Girl with the Louding Voice” does not just tell a compelling story but is an exercise in storytelling. One of the book’s highlights is its employment of tenderness, empathy, and the very essence of education which is recognition of various worldviews of life, despite our individual experiences. “We all be speaking different because we all are having different growing-up life, but we can all be understanding each other if we just take the time to listen well.” In this way, Adunni’s story becomes an encouragement to tell our stories.

Michael Chiedoziem Chukwudera is a freelance writer and editor. You can reach him at Chukwuderamichael@gmail.com or follow him on Twitter @ChukwuderaEdozi.