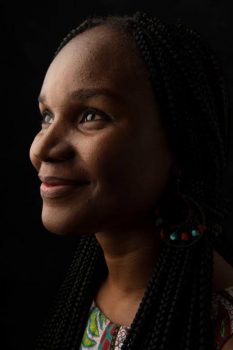 The Call to Greater Understanding: A Review of Ukamaka Olisakwe’s “Ogadinma: Or Everything Will Be All Right”

…in Ogadinma, Olisakwe reflects back at Nigeria as well as weaves a story around its milieu.

Ukamaka Olisakwe’s second novel, Ogadinma: Or Everything Will Be All Right, published in Nigeria by Masobe Books (2020) tells the story of a short-lived marriage between the 17-year-old protagonist, Ogadinma, and a 35-year-old man, Tobe. It details the naïvety of the protagonist which preceded the union, and its implications; domestic violence, and everything in-between. A character-centric novel, Ogadinma, though, in third person, is written purely from the protagonist’s perspective, and it is through her lens and her interactions that we come to see the other characters. In this book, Olisakwe’s writing style is cinematic, with a linear plot. The book hits the ground running from the very first page, and the reader is introduced to the main character walking into a situationship which lands her in a disgraceful situation where she must either make an extreme decision or confess to her father. One cannot help but think about J.M Coetzee’s Disgrace in how swiftly the story unfolds, particularly in the early chapters of the book.

Set predominantly in Kano and Lagos with part of the book set  in Aba in the mid-80s, Ogadinma’s story takes place in a Nigeria heavily rocked by military dictatorship especially as the narrative extends between the period of the final years of the country’s first civilian rule, and the coup which overthrew them and enthroned the Buhari-Idiagbon regime in 1984. Although the names of these dictators are not mentioned in the book, each specific regime is given away by the historic events recorded in the book. One of the events disclosed in the book is the panic which gripped many of the corrupt contractors of the civilian regime in 1984 after the coup, and how many of them had their properties and money seized — a misfortune which befell Ogadinma and her husband Tobe in the early days of their marriage, and arguably played a role in the deterioration of their union. There was also the rampant action of soldiers beating up and flogging people in the streets, giving away the Buhari-enacted War Against Indiscipline. Apart from military dictatorships, the book illustrates the ethnic and religious tensions in Northern Nigeria which has always led to crises and the destruction of lives and properties, a problem which persists in Nigeria today.

Set in an over-35-year-old past, in Ogadinma, Olisakwe reflects back at Nigeria as well as weaves a story around its milieu. The situation of Nigeria in the 1980s painted in the book is reminiscent of the images painted by Ayọ̀bámi Adébáyọ̀ and Obinna Udenwe in their novels, Stay with Me and Colours of Hatred respectively.

Both novels, like Ogadinma, tell humane stories partly in the backdrop of 1980s and 1990s Nigeria, with the characteristic military dictatorships and gross corruption. From the trio of Olisakwe, Adebayo and Udenwe’s novels, I am struck by the message contemporary Nigerian novels are passing to us in their representations of the similarity between the present and the past.

In this way, Olisakwe’s novel espouses a positive attribute of the contemporary novel, a genre many sincere critics will argue is losing touch with reality since mainstream literature came to be dominated with categorised narratives.

Ogadinma is very relatable. Most socially-aware Nigerians know an Ogadinma; maybe not from the general, grave circumstances which surrounds her life, but through her inability to exit her toxic and abusive marriage because of societal conventions which scoff on a runaway wife. The novel attempts to explore the psychology of being in a troubling situation like an abusive marriage against the action of walking away from one-knowing how tricky such a decision is, in light of the societal stigma attached to it.

The characters in Ogadinma are well carved out. The protagonist has friends and relatives—including her husband’s. The characters are three-dimensional, and the book does not fall to the trap of painting its characters in either evil or good light. Even Tobe, Ogadinma’s abusive husband, has his moments of endearing goodness in the book, and Ogadinma the protagonist, has her foolish and unimpressive moments.
Another spectacular part of the novel is its ending. A parallel could be drawn to the state of mind of its protagonist when the book ends to that of Adah in Buchi Emecheta’s Second-Class Citizen and Flora Nwapa’s protagonist, Efuru, in Efuru, particularly the latter. The women in these novels go through personal challenges, and at the end of the work, they stand at a point in their lives where they move away from the box societal conventions have placed them in. Like Ogadinma, Adah is moving from an abusive marriage; like Efuru who questions the worship of Uhammiri the river goddess in the end of the novel, Ogadinma questions herself and the turn of her actions in the end. Although this is one of the climaxes of the book, the passage leading to this end are the work’s most flawed parts, not because it was badly-written, but because it could have been more expansive since that part of the book houses a very important evolution of the protagonist.

Ogadinma is a story which takes the side of the misunderstood victims of abused marriages. It is an artist calling on the society to take a second look at the oil floating on water, and to see not merely the immiscible mixture, but the reflections of themselves on the floating oil. Olisakwe is an artist calling her audience to a better understanding.