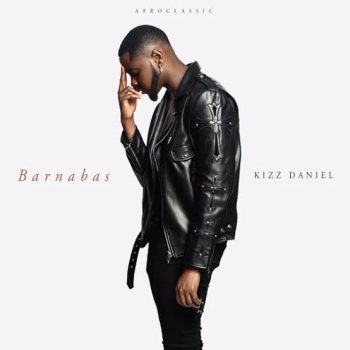 In “Barnabas,” Kizz Daniel showcases his growth in his sound, delivery, the stories he chooses to tell, and the messages he relays…

Nobody does it quite like Oluwatobiloba Daniel Anidugbe. We have to admit that watching a charming 20-year-old sing to us a song in 2014 that would go on to become a notoriously viral hit on our TVs that same year, ushered a new era into the Nigerian music scene.

We’ve had several one-hit wonders in the industry, and it was easy to assume that following the commercial success of his sophomore single “Woju,” this young boy would end up just another of those, but he proved us wrong as he pulled the same neat trick many times in the coming years.

In the seven years since his big debut into the landscape, amidst PR nightmares, his huge disagreement with his first record label which eventually resulted to his slight name change in 2018, among others, Kizz Daniel has delivered three brilliant projects (“New Era,” “No Bad Songz,” and “King of Love”), and now, he has added another to that perfect discography.

In an industry where, over the years, solid storytelling in music has been constantly traded for repetitive lines in hopes that the sound will capture the audience’s attention enough to score artistes a hit song, Kizz Daniel melds both concepts of brilliant storytelling and infectious hooks, and still delivers beautiful music while doing his barest minimum.

His first project, “New Era,” released in 2016, two years after “Woju,” has been dubbed a classic album for this very reason. Comprising organic hits like “Jombo,” “Mama,” and “Laye” among others, Kizz Daniel made 2016 a good music year in the industry, almost single-handedly. And on special records like “Kudi” where his songwriting was on an euphoric high, because he sang about his heartbreak in such brilliant detail, Kizz Daniel quickly made it known to the country, the continent and the world, that he was here to stay.

One argument, though, that has subsisted against Kizz’s artistry is the unnecessary length of his projects. Admittedly, if a couple of songs were cut from the process of his albums’ playlisting, it’d make for a more cohesive project. So, imagine our delight when he announced the release of “Barnabas,” a 7-track EP. This meant death to all agenda. For this writer, it also meant that we had Kizz Daniel in his highest definition yet, and it’d be more difficult to fault the project.

In his usual fashion of ‘murdering’ his projects’ intros; cases in point: ‘New King’ in “New Era,” ‘Gods’ in “No Bad Songz,” and ‘Jaho’ in “King of Love,” he does a similar madness in “Pour Me Water.” In today’s climate, only relationships where each party gives similar “energy” are tagged successful. On a mid-tempo vibration, Kizz sings about not being accorded the same love, care and adoration that he gives his partner. Not being loved in the same way you love can be quite hurtful. He promises to move on, and when he does, she shouldn’t retaliate out of anger, as he’s deserving of a love where neither of them is hurting.

It is known that men have three major vices: drinking, smoking, and gambling. In “Addict,” Kizz sings about indulging in almost all these and more. The life of an addict is somewhat predictable. They promise to quit after one more time of going all out. “After today, I go change my ways, but right now, I’m so falala…” he sings. Staying true to an addict’s lifestyle, he smokes, has unprotected sex, does basically anything that could have terrible consequences.

What is a Kizz Daniel project without a tune to dance to with reckless abandon? Pulling together a bunch of elements and subtly inserting the uncontrollable inflation the country is facing, “Eh God” is a generic dancehall tune Kizz Daniel is known for, but it doesn’t lessen its effect.

It seems everybody are gunning to feature The Cavemen. Infact, it has become the pattern with projects released in the second half of 2021. They are new and a breath of fresh air, and it’s only natural to want to have that, no? Kizz Daniel doesn’t pass up on the opportunity to have them perform their magic on his album. As he’s not new to highlife in the least, “Oshe” is a fluid collaboration and the end result is immaculate. “Baby girl, let me whisk you away/Whisk you away on holiday,” is sure to become a catchphrase in December.

We are not new to the concept of Kizz confessing his love (or lust, in some cases) to his romantic interest. He has constantly drawn us in with the style which he employs, in fact. In “New Era,” he did this with ‘Mama’ which became a hit because of its sweet melodies and the sincerity with which he relayed his lines. In “King Of Love,” a project dedicated to the very theme, he did it with both ‘One Day’ and ‘Need Somebody,’ injecting a double-dose of that sincerity and conviction he’s popular for.

In “Barnabas,” he’s here with ‘Burn,’ and it still makes us swoon, even if we have heard these words a million times. The growth in his sound and experience is evident, as this time, he promises longevity with his love, even in other lifetimes.

For months, “Lie,” has been playing on our speakers, and the track is deserving, as it highlights a societal issue whose gravity many still struggle to grasp. His lyrics, “Girl, I don’t really care about your body type,” celebrates body positivity in a way that not many do. Making its way to Tik-Tok, Instagram reels, Twitter, does more for the cause than we can probably fathom.

“Skin,” in the same way that “Lie” does, spreads positivity, encouraging people to hold their head up high regardless of the colour of their skin. In a world where there’s disparity in the treatment of a sect because of the colour of their skin, the message in “Skin” speaks volumes. Enlisting German rapper, Kelvyn Colt, the track shines as the project’s jewel because of its layers and exquisite production.

In “Barnabas,” Kizz Daniel showcases his growth in his sound, delivery, the stories he chooses to tell, and the messages he relays. The cohesiveness of the project resounds, and he’s in top form sonically. As evident in his other projects and this one, he draws inspiration from everyday phenomena and the seemingly inconsequential struggles of the common man. He reasserts his position as one of the best artistes in the country, and it’s a win-win for everybody.

Kizz Daniel is undeniable, and in “Barnabas,” he upholds his staple; it’s a new era and there are no bad songs.