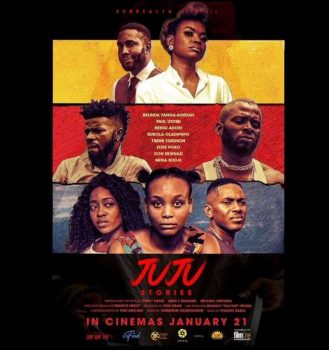 …Juju Stories is helmed by Surreal16, a collective of three independent, new wave writer-directors, with each of them handling one of the three short films, stylised as chapters.

The first opportunity I had to see Juju Stories came at the least opportune time. It was showing at the Surreal16 Film Festival in Lagos, but I was too many states away. The three-part anthology film already had a reputation, after premiering at the Locarno Film Festival, 2021 where it earned multiple nominations and won the Boccalino d’Oro award for best film. It also won the Best Director award at the African International Film Festival (AFRIFF), 2021. So, I expected or, more accurately, hoped that it would somehow find its way to me, eventually. But as anthology films rarely make it to Nigerian cinemas, Juju Stories’ theatrical release in January, 2022 was a welcome surprise.

Still too many states away, and with limited and unfavourable cinema show times, seeing the film was starting to feel like an impossible task. By my third attempt to make it on time to the only cinema in the state, I was almost exhausted. I wonder how I would have felt if the film had been disappointing. Thankfully, I’ll never know.

Produced by Oge Obasi, Juju Stories is helmed by Surreal16, a collective of three independent, new wave writer-directors, with each of them handling one of the three short films, stylised as chapters. The three chapters are connected only by juju (supernatural, magical power), each one exploring separate Nigerian urban legends. All three stories are anchored on ordinary, unassuming characters in a Nigeria where modernity almost comfortably co-exists with the supernatural past. And while the stories rarely progress chronologically, they remain easy to follow.

“Love Potion” is the first of the juju stories and, perhaps, the one with the most depth. Written and directed by Michael Omonua, it follows Mercy (Belinda Agedah Yanga) as she falls in love with, or, more appropriately, lusts after, Leonard (Paul Utomi), a man who is engaged to be married. Easily convinced by a friend, she explores an option that one might not expect from a working class aspiring novelist— she concocts a love potion. Then, the story also follows Leonard as he suffers the effects of said love potion, losing himself to Mercy.

“Yam,” written and directed by Abba Makama, is the most bizarre of the stories and, yet, the most nostalgic. A couple (Micheal Ejoor and Uzoamaka Aniunoh) sits at their dining table, discussing a newspaper report about people turning into yams after picking up money from the sidewalks.

Comfortable in their upper class home (if this is not obvious enough onscreen, the credits make a point of naming the couple “upper class man” and “upper class woman”), they make a joke about Nigeria and sidewalks, mostly unaffected by the news. But on the streets, the crazy newspaper report is other people’s reality.

On one hand, Amos (Don Ekwuazi), a street thug who harasses people and forcefully obtains money and items from them, is chased by a mad woman before he picks up money from the road. On the other hand, Tohfik (Elvis Poko), a vulcaniser, prays against evil in the form of madness, plots evil against his pregnant girlfriend (Valerie Dish), and eventually falls into evil himself when he picks up a mysterious tuber of yam from a bar. 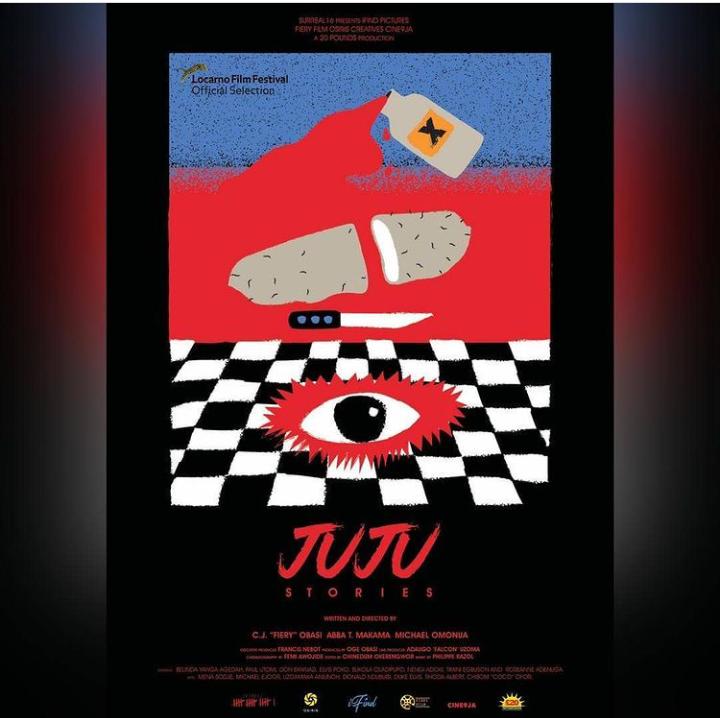 In “Suffer the Witch” the closing short, C.J. Obasi explores the more widely known concept of witchcraft. Here, the protagonist, Chinwe (Bukola Oladipupo), develops a friendship with Joy (Nengi Adoki), her roommate who, by all accounts, happens to be a witch. With Joy fixated on Chinwe, anybody and everybody who attempts to come between them, including Chinwe’s romantic interest, Ikenna (Timini Egbuson), does so at their own risk. And whether anybody stands a chance against the “witch” remains to be seen.

In an era where the desire to appease or draw in global audiences is a major inspiration for above-average filmmaking, the anthology stands out for its dedication to quality filmmaking despite its lack of interest in the recent trend of begging for the love and appreciation of foreign viewers. Between its subtle references and the filmmakers’ refusal to over-explain or justify their creative choices to viewers who lack knowledge or an understanding of Nigerian folklore, Juju Stories is a literal “If you know, you know.”

From the language choices to the naturalness of the dialogues, the Surreal16 Collective put on show the kind of ambitious filmmaking we hope to see more of from New Nollywood, where substance is prioritised over glamour, and the most honest portrayal of contemporary Nigerianess is not prohibited. And although it thrives on the familiarity of themes, particularly that of magical realism, which were explored so very often by Old Nollywood, it still strikes as very different, as genuinely refreshing as it is refreshingly genuine.

There is something to be said about how each director paints the picture in his portion of the anthology, using both the characters and the shots. In “Love Potion,” Omonua takes a casual, unceremonious and measured approach to a deeply disturbing matter, creating a feeling of normalcy in an insane situation, while also finding narrative depth in the shallowness of his chapter’s lead character.

In “Yam,” Makama opens and closes with a derivative of Edvard Munch’s famous painting, “The Scream,” a painting that is understood as a representation of the anxiety and terror of man. Between the sometimes chaotic shots (which may initially have a painful effect on one’s eyes) and the combined anguish experienced by both Amos and Tohfik, Makama establishes the mental instability and sheer terror that ultimately engulfs his lead characters, boldly captured in such a way as to evoke uneasiness (which I absolutely felt).

And in “Suffer the Witch,” Obasi utilises space, both distance and proximity, in portraying a range of elements, from hopelessness to control and the lack thereof. Plus, in an interesting nod to The Sunken Place in Hollywood’s “Get Out”, Ikenna floats in a void as he watches a personal tragedy via an out-of-body experience. So vivid are the pictures that each story paints that long after the credits roll, you might find yourself questioning the tuber of yam in your kitchen, or wondering how a person can recover from a love charm or escape an obsessed witch.

As a whole, Juju Stories is not about right or wrong, or about judgment or redemption. Very few characters have a moral ground to stand on. And although one story is built on the foundation of the consequences of one’s action, all three of them serve as a terrifying reminder that people get away with bad things while others, harmless or not, suffer the consequences. Unlike the juju stories of Nollywood’s past, Surreal16’s anthology is not much of a cautionary tale. It is a mere telling, more interested in exploring than in preaching. As far as the goals of its makers go, and as far as art is concerned, Juju Stories gets the job done.