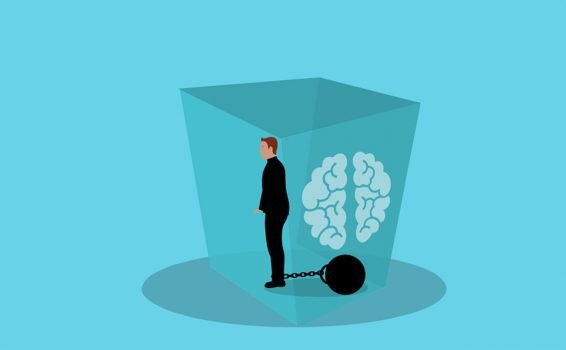 The Mental Health Pandemic: Why More Men Will Keep Suffering in Silence

Around the world, research has shown that more women are affected by mental health; 11.9% of women and 9.3% of men. This slight dissimilarity in percentage makes all the difference…

Back in November 2017, tabloids, magazines, and the Internet were talking about Tyrese Gibson, an American actor and singer. The headlines were simple, and despite the disparity in the choice of words, the message was clear: Tyrese Gibson apologised for his public meltdown. In fact, ETOnline stated: “Tyrese Gibson is sorry for his public meltdown.” The “meltdown” in question happened on November 1st in an emotional Facebook video. In the video, the distraught actor cried about the legal battles with his ex-wife, which prevented him from seeing his daughter, Shayla. In the highly emotional video, Tyrese pleaded that his daughter shouldn’t be taken away, while also admitting that she is all he has.

But despite the evident veracity of the situation, and the disheartening psychological impact this had on him, Tyrese was ridiculed, questioned, and ignored for the most part. As a matter of fact, the video of him crying was quickly turned into a meme. Full of regret for publicly expressing how he felt, Tyrese apologised for his action, and added that it was due to his psychiatric medication.

Similarly, singer, Kanye West suffered a mental breakdown in 2020 during his Presidential Campaign in South Carolina. While many were sympathetic towards the rapper, many others used this as an opportunity to mock him, and accuse him outright of misogyny. West was first diagnosed with bipolar disorder in 2016, and he explains his mental experiences to David Letterman, saying: “When you’re in this state, you’re hyper-paranoid about everything. Everything’s a conspiracy. You feel the government is putting chips in your head. You feel you’re being recorded. You feel all these things.”

Evidently, West was in pain; his recent divorce from Kim Kardashian clearly showed his struggles with his mental health. But just like Gibson, the Internet, the world, has thrown fingers of accusations at West, and of course made memes out of his predicament.

More recently, in 2020, the world watched Will Smith listen to his wife admit that she cheated with August Alsina. Even though she claimed they were separated at the time, Will Smith’s facial expression clearly showed heartbreak and regret. But as expected, the Internet captured Smith’s expression — ignoring the thousand emotions this man could be feeling — and turned it into a meme!

Before long, we all forgot about it, and the world spun madly on.

It is 2022, and we are more than informed about the dangers of mental health issues. We have seen how it cripples, until it eventually drives one to suicide, or cause complete detachment. Fortunately, more discussions and research are dedicated to understanding and conquering mental health diseases.

Around the world, research has shown that more women are affected by mental health; 11.9% of women and 9.3% of men. This slight dissimilarity in percentage makes all the difference. Largely due to the fact that the mental health of men is paid lesser attention in comparison to the opposite gender, suicide rates among men is almost three times more than for women.

Suicide is definitely a complex subject with a myriad of causes, but a strong argument has remained this: more men remain undiagnosed, and many more refuse to talk about it. The fear is understandable; who wants to be the next Kanye or Tyrese? Who wants to see their mental health condition turned into a meme?

In Africa, the situation is bleaker. The mental health of men is understudied, both in social and medical spaces. Despite the Internet advice that more men should be open and learn to be vulnerable, as previously shown, this has only led to ridicule. Also, Africa still falls far behind in completely understanding the implications of men’s mental health illnesses. Complaints about sadness are quickly serenaded with tunes of Be a Man, or the more popularised version of “men don’t act that way.” But as expected, the internalisation of these emotions only contributes to making men more vulnerable to mental health illnesses.

To highlight the decaying extent of men’s mental health in Africa, take a look at this image: 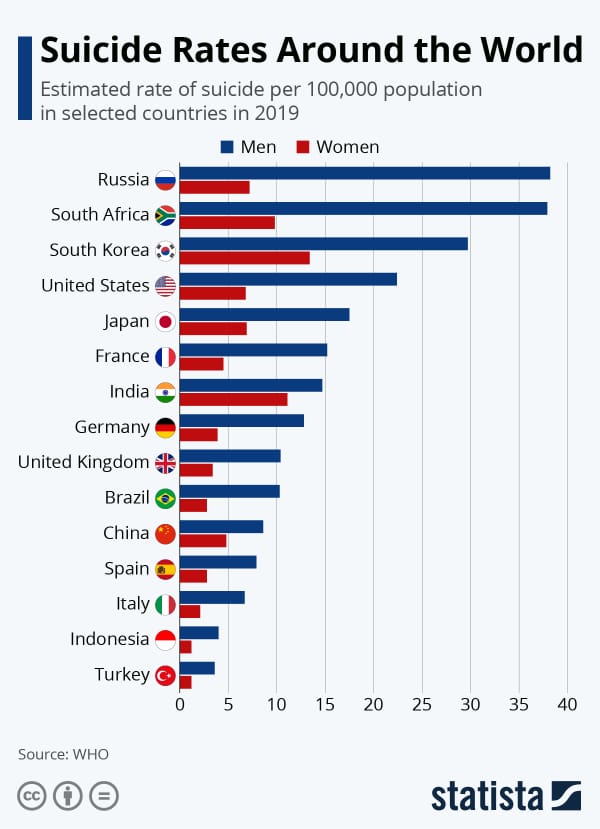 After Russia, South Africa has the highest rates of suicide among men in the world, recording an astounding 37 deaths from suicide in every 100,000 men. Meanwhile, Brunei records a total of 4 deaths by suicide in 100,000 men. The report further explains that 13,774 suicides happened in South Africa, and 10,861 of these were men.

In Nigeria, things are a bit more disjointed. First and foremost, the country lacks a proper framework to monitor the extent of mental health in both men and women. There are only few media reports, fewer statistics, and a lack of national sensitisation. If Nigerian men finally decide to seek help, they are met with ridiculous medical bills, and the supposed stigma associated with speaking with a therapist. To make matters worse, Nigeria’s foremost psychiatric institution, the Neuropsychiatric Hospital, Yaba, Lagos, — known popularly as YabaLeft — is a hell-hole plagued with bad beds, unhealthy food, and rats big enough to start an invasion.

How, exactly, is good health guaranteed in a space as unreliable as this?

To curb the menace of mental health illness in its root, we need to consciously dedicate time and effort to creating safe spaces for men. This could be termed a social revolution; one that not only restructures our understanding of mental health as Africans, but one that also creates a safe space for men to adequately express their deepest emotions, one that allows them to reach out for help without being ridiculed.

Additionally, social media and popular culture are important tools in kick-starting this revolution. However, when neglected, these same tools will have the exact opposite effect. Ridiculing the stories of West, Gibson, and Smith only goes to trivialise the stories of millions of men who suffer in silence. We can do better. We can choose to ignore if it fails to resonate with us, but to effectively tackle this scourge, it will never be right to poke, ridicule, or make fun of a suffering man.

David Adewusi has appeared in the Kalahari Review, Praxis Magazine, African Writer, and Naked Convos. Currently living in Ibadan and being forced to study in a Nigerian institution, his biggest dream is to be left alone.