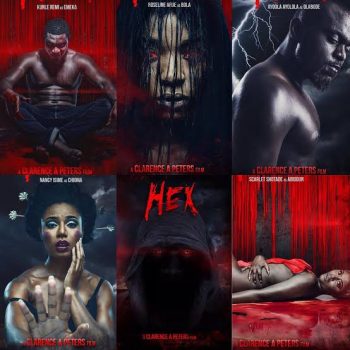 What matters to viewers, ultimately, is that a horror film delivers some type of heightened sensations associated with terror. This is where Hex falls short…

Short films are often a great starting point for new directors. They are also an excellent medium for launching horror feature films and franchises. Perhaps, these two advantages contributed to Clarence Peters’ decision to make Hex, a 2015 horror short film that marked Peters’ entry into the world of film as a director, producer and screenwriter. He also served as the director of photography after his stint as a film cinematographer on Ishaya Bako’s 2010 short film, Braids on a Bald Head, which won the Efere Ozako Award for Best Short Film in 2012. Hex, itself, went on to win Best Short Film at the 5th Africa International Film Festival where it had its premiere.

Split into four episodes, this horror short is essentially a lesson in actions and consequences. Roseline Afije (2021 Big Brother Naija’s Liquorose) stars as Bola, a medical student supposedly suffering from an unnamed mental health condition after being involved in a killing with four friends. Tortured by an unseen person in her home, Bola hides away in a bath tub, too afraid to come out. In each of the first three episodes, she puts a phone call through to one of the culprits from her bath tub, from Chioma (Nancy Isime) to Biodun (Scarlett Shotade Gomez) and Emeka (Kunle Remi), and then to Bode (Ayoola Ayolola).

They are visibly upset and exhausted by Bola’s inability to leave the traumatic past in the past. And while she speaks to them, their victim visits them wherever they are and exacts bloody vengeance.

Hex opens with the promise of horror: an eerie opening score rooted in a traditional sound followed closely by a suspenseful score, threatening thunder and lightning, flickering lights, Phyno’s Ghost Mode conveniently showing on a television screen, a rattling door handle, and a frantic woman hiding away in a bath tub. Considering its opening sequence and its description as a horror short film, it is reasonable to expect to be shaken by its scenes. Yet, a lack of horror haunts the short. Hex offers no fear factor, certainly not to its viewers. But this is not necessarily a nail in the coffin.

A horror film can put aside fear, and focus on gore instead. The Saw movies are an archetype of this style of horror. They are not particularly scary, but their propensity to cause the viewer to flinch as characters struggle to free themselves from traps or to make the viewer unwittingly shut their eyes when said characters’ failures lead to certain death or, at least, loss of some body part, contributed greatly to the Saw movies’ status as one of the most successful horror franchises. What matters to viewers, ultimately, is that a horror film delivers some type of heightened sensations associated with terror. This is where Hex falls short.

For the first two episodes, we see characters die, but we do not see them get killed. In the third episode, we finally get to see the murder happen. But it is a much less graphic and much easier form of murder to watch. Even then, we have to watch through a window, the murder hidden away by the heavy rain falling outside of the crime scene. And in the final episode, where the perfect opportunity arises to ride the shock wave, the filmmakers opt for the easier route and simply blank the screen out.

There is no scene in the entire twenty-six minutes running time that makes you jump or widen your eyes in fear or feel the need to look away. This is effectually the nail in the coffin.

It certainly helps that Peters’ wealth of experience as a music video director and cinematographer is evident in the visual appeal of the short film. Plus, the visual effects are very well done, especially considering the fact that it was shot as far back as 2015. While quality visual effects should probably not garner the quantity of praise that they do in Nigeria’s film industry, when something stands out, it deserves to be acknowledged.

Yet, this is what makes the lack of gore— at least, as a replacement for fright— painful, the fact that if the filmmakers had tried, they would likely have gotten it right. Instead, they gave up on extremities when extremities mattered most, causing the film to appear unsure of its horror theme.

Hex is a high-concept film. Thus, it thrives on its “What if” question as well as any high-concept film. Here, the question is simply “What if someone you murder comes back to haunt you?” The short emphasises its concept, dutifully devoting its entire running time to that premise. Consequently, it relegates character development to the background as is usual with high-concept films. We don’t have to like the characters, but we should at least care enough about some of them to feel invested. Unfortunately, the film gives us nobody to care about. We don’t even care about Bola, and she’s the one we understand the most and consider to be the most humane.

As for the villain, we don’t care about him as a villain any more than we care about him as a victim of the other characters. The focus is never really on him. Played by Rotimi Oshodi (who co-wrote the screenplay), he has no name and no identity. He is basically faceless, covered in black clothes and a hood throughout. We watch his victims as he lurks in the background, watching them, too.

Even in the scene where he is the victim and the others stand over him, though the low angle shot used in that scene assists with dramatic tension, it also excludes him from the picture, capturing all of them from the ground where he lies, as if he is watching them even in death.

It would have been more satisfying to understand the hooded villain as something more than just a victim-villain. Even his victims could have held interest, too, but, in a way, there are really nothing more than just victim-villains as well. Yet, the lack of character development is forgivable, since keeping the villain at a distance works to the benefit of the film’s suspense as the mere feeling that someone is lurking around unseen helps build up tension.

And how much time does a short film have to pull off enough character growth, anyway? It is worth something that the film is well acted. The actors do a convincing job with the material they are provided with, even if Liquorose could have translated her role better in the final episode.

Hex promises more than it delivers, but it does deliver a substantial part. It has spirit and resolve. It catches and holds your attention from the beginning to the end. And, at least, it finally feels like a horror film when it comes to its open-ended conclusion, raising more questions than it answers and leaving viewers unsettled, in the usual horror film manner. A lot of work will have to be put in to perfect the craft, but if Peters ventures into film more permanently, it is likely that he will be a good filmmaker.

Vivian Nneka Nwajiaku, a film critic, writer and lawyer, currently writes from Uyo. Connect with her on Instagram @ vivian.nneka