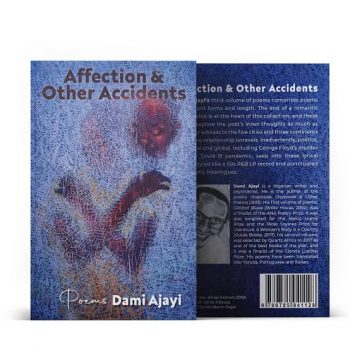 Hell Hath No Fury Like a Poet Scorned: A Review of Dami Ajayi’s “Affection and other Accidents”

Sometimes, poets use their poems as a glimpse into their personal lives, but this collection offers more than a glimpse…

Affection and other Accidents is Dami Ajayi’s third poetry collection. The previous collections, Clinical Blues, and A Woman’s Body is a Country gathered critical acclaim and sealed Ajayi’s place as one of the most important poetic voices in contemporary African poetry.

This latest collection continues the poetic tradition that has now become Ajayi’s trademark, except that it includes a minor experimentation in form. The two most important features of A Woman’s Body is a Country are the references to songs as well as poems that treat the mundane, almost to the point of self-deprecation. Affection and Other Accidents departs slightly from this, introducing other issues and maintaining a storied arrangement.

Historically, much of African poetry has been concerned with such serious, social issues such as in Niyi Osundare’s The Eye of the Earth, and Ijeoma Umebinyuo’s Questions for Ada that deal with climate change and feminism respectively. Ajayi breaks from this norm with his definition of a personal poetic style which involves writing about everyday issues. Nonetheless, his latest collection shows a maturation and a more urgent concern with love and its ills. Ajayi is not a stranger to love poetry, and he shows love in a different light.

A preliminary reading of the collection and a consideration of the title suggests that it is a collection of heartbreak poems, but a deeper reading would show that the poems are not ordinary heartbreak poems but expressive ones that show vulnerability and attempts at writing pain vividly. Heartbreak poems are a subgenre on their own as heartbreak and unrequited love are phenomena that have been proven to, more often than none, inspire poetic expression. The poet calls affection an accident, and the second poem in the collection, “Aubade to My Greying” exposes the poet persona’s regrets, wishes and experiences, a good follow up to the eponymous opening poem,
“Affection & Other Accidents” which itself is a long-winding experimental poem that reads like a short story of the poet’s love and the many upheavals he faces, from his own individual perspective. The retelling of the love story makes it feel like a villain origin story. The merit of the narrative is that it shows vulnerability, that love is not all glamorous. The heartbreak narratives are so beautifully told that they suggest a convincing honesty.

The words are fine, even though they carry pain. Beyond lyricism, Ajayi shows that words are amoral things; they can carry pain and still look beautiful. The collection hosts 51 multi-topical poems, almost as if invoking David’s plea for repentance in Psalm 51, only this time around, perhaps a poet’s repentance from loving. Despite the pain, Ajayi’s typical popular culture-inspired narrative showed up right at the start of the collection with the opening poem, “Introit” which begins with the phrase, ‘Bless Up.’

If Ajayi’s previous, sophomore collection, A Woman’s body is a Country was like writing poetry in songs, this new collection feels like writing poetry in prose. It is a collection of poems that could also have been a series of essays on love, lust, loss, affection, and other accidents as stated by the poet. Poetry does the work of suppressing these feelings and stories into poetic expressions. The poems in this collection are those that do more good to the poet than readers, definitely not what a debutant poet would write. As an experienced poet, Ajayi is able to dance at the precipice of truth and poetry, painting vivid images of a failed love encounter without giving away enough details to get in trouble with the other party. This is shown in some of the lines that require some context for interpretation. The lead poem contains the following lines that might require some background for readers to understand:

My heart pounding against my chest, I wanted to do two things. One was to get off & never see you again. Two was to call my mother & apologise for being rude to her when she began to ask questions about Denmark. & you kept going at it (4).

The poems also show a peripatetic poet whose commitment to the love affair is not limited by geography. However, the stories behind some of these travelling remain elusive to readers as the poems do not contain enough context. The journey motif seems to recur with the mention of many cities across the world: “I was waiting with questions, waiting for your answers, but we would not speak of Lagos, of Berlin, of Cologne” (4).

However, sufficient context is not provided for these journeys. The journey motif is a thread that has potential, but the poet refused to push it further.
Another important feature that runs through the love affair narrated in the collection is the poet persona’s dismissal of their own flaws, making a casual mention of it as “What happened in that train? I am not a perfect. My past loops into the present, a trail of dalliances returning like the proverbial abiku” (5).

These lines only suggest that the poet persona has flaws that they would like ignored or glossed over. The extent of the dalliances referenced remains unknown.
There are other topical poems that reference recent historical events like the COVID-19 pandemic. These kinds of poems not only express the poet’s feeling, but also speak to recent events in history. References to music also recur in the collection. The poet mentions musicians like Ebenezer Obey, Dido, John Coltrane, and the Lijadu Sisters. There is also a reference to an exclusive night club, a pointer to the centrality of music in Ajayi’s oeuvre. There is an authorial intrusion that is reminiscent of Ajayi’s Clinical Blues, which relies heavily on his experience as a psychiatrist: “Somewhere in the psyche ward
a registrar discovers Freud” (18). 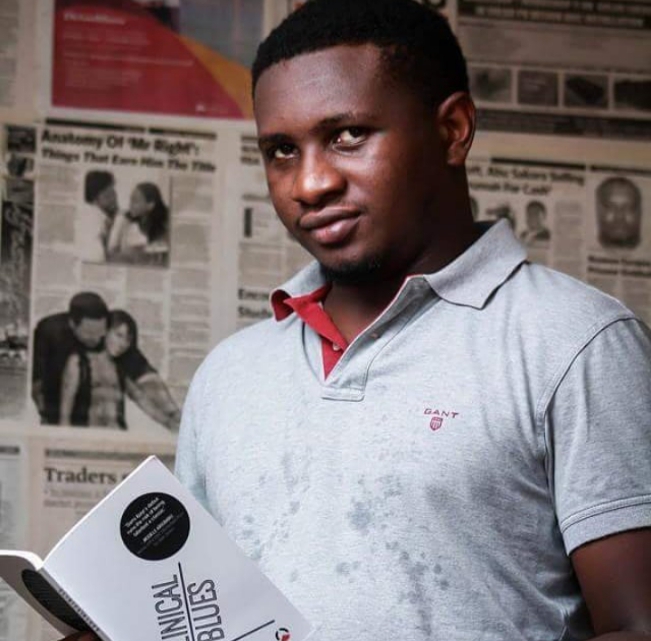 Just as the collection progresses and other themes threaten to overwhelm the pain which is central to the collection, “Interlogue II” refer the readers back to the poet persona’s heartbreak with the following lines:

“It is still surreal
that you did me dirty in five cities” (19).

These lines restate the scorn that the poet persona feels, and makes it difficult for readers to objectively assess the situation.

These are poems written in low moments, conveying truth and honesty. They show a poet persona who is now conscious of their body and how they look. Asides from the reference to popular culture, the poems in the collection also draw a lot from poets like Derek Walcott, Christopher Okigbo, and Gabriel Okara, perhaps a little too much.

The intertextual influences from music and popular culture overdiluted, almost, the poet’s unique voice. Sometimes, poets use their poems as a glimpse into their personal lives, but this collection offers more than a glimpse. There is a high degree of honesty which, when combined with the obvious authorial intrusion, might show that the poet wrote the poems about his experiences. It is the work of a poet who is healing.