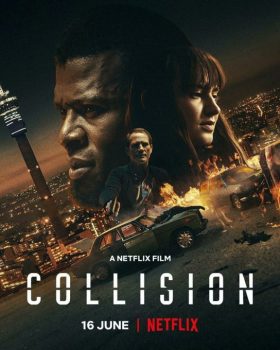 It is generally well shot and has important themes, but too much about it is non-committal. It’s simply not interesting enough…

In Collision, a corrupt businessman and his socialite wife race to save their daughter from a notorious crime lord over the course of one day. That’s the official synopsis. In reality, the South African crime thriller released on Netflix in June, 2022 is about everything. The film follows several people and the many decisions that they make in the final hours before their fates collide. It’s not a new premise. I can think of a few similar films, from Hollywood’s Oscar-winning Crash to Nollywood’s AMAA-winning Last Flight to Abuja. But it is a premise that provides a screenplay with the chance to be about anything. Directed by Fabien Martorell (Unbelief, The Coin), Collision attempts to milk the opportunity, choosing to tell all-important stories alongside a thrilling one. But with a plot so all over the place, and the film’s inability to tell its stories with any real vigour, it ends up being a lacklustre movie that fails to rack up any emotions.

It opens with a literal traffic collision. There’s a dead man on another man’s windscreen, and a screaming girl with a nosebleed in the boot. In another car, a man looks through his own window and says to his wife, “It’s fucking him.” Then, he pulls out a gun and gets out of the car. The man with a dead man on his windscreen takes a gun out of his glove compartment and gets out of his car, too. The rest of the film details the events that lead up to that collision, starting from two days earlier.

In a drawn-out first act, we’re introduced to all the characters and subplots. The supposed protagonist is Johan Greser (Langley Kirkwood), the head of security at a company run by his sister-in-law (played by Natania Van Heerden). He’s a white man doing corrupt deals with a notorious black gangster called Bra Sol (Vuyo Dabula). When one of such deals gets thrown into jeopardy, his only hope to save it is to get promoted to the position of Chief Financial Officer, a job he’s fairly certain he’ll get with the help of some nepotism. At home, Johan is in a troubled marriage with his socialite wife, Diane (Tessa Jubber). Together, they have a troubled relationship with their rebellious teenage daughter, Nicki (Zoey Sneedon), who considers them to be bad parents, and who skips school to hang out with her black, singer boyfriend called Cecil (Siphesihle Vazi) and his money-hungry friend, Thando (Mpho Sebeng).

Somewhere in all of this is a subplot about xenophobia. Dinoko Wiseman (Pheello Kotelo), a South African store owner who is still struggling to make rent on his store decides to lease yet another store, but he is beat to the punch by a Nigerian named Adze (Thamsanqa Booi who seriously struggles to pass as Nigerian). Bitter about losing his chance to a foreigner, he rallies together other locals with similar grievances, and they set off to attack Nigerian and Zimbabwean immigrants along with their businesses. Within that subplot is another subplot: Dinoko’s daughter, Palesa (Samke Makhoba), is falling in love with Adze, and the film uses their hurried relationship as a platform to debate the issue of xenophobia.

These subplots are connected through certain characters: Dinoko pays tax to Bra Sol, and secondary characters from the xenophobia subplot just happen to be in the traffic collision that gives the film its name. Plus, the destruction that comes with the xenophobic attacks causes the traffic lights to malfunction. It’s a tenuous way to link the widely different stories that make up the film, and the haphazard manner in which the individual stories of all the characters are looped together doesn’t work as well as the filmmakers hoped. I can see what the filmmakers are trying to do, but I can’t blame anyone who can’t. It’s genuinely very difficult to understand the goal of this film.

For a crime thriller, there is barely any real thrill or suspense, and, even at the point of its weirdly slow climax — seeing as there’s a motor vehicle crash involved — it’s still difficult to be invested in any of the stories. The crime aspect is just as haphazard as the plot. Within the part of the plot involving Bra Sol and Johan, there’s talk of bribery; there’s Bra Sol dealing with a corrupt mayor so that the gangster can build a big school; there’s the trafficking of young girls. But there’s never a point where all these things come together to make a whole, and we never understand what the deal between Bra Sol and Johan really is.

In fact, the entire film feels merely perfunctory. The events of the film unfold across only two days, so it tries to provide some background through dialogue. But the bits and pieces of information feel forced. Bra Sol seems like an established gangster, so it’s hard to understand how his mother, with whom he clearly has a close relationship and who happens to have raised him to be dignified and respectable, is only just hearing rumours about his lifestyle. In the middle of a mostly apathetic argument, Johan accuses his wife of being so busy trying to save the whole world that she doesn’t have a handle on her own child. But it doesn’t make any sense because up until that moment, we never see her do anything other than be a mother and wife. And throughout the entire film, we only see her on her real job one time, and it seems to be happening in her own backyard.

Some subplots, such as a medical scare in an early scene, get abandoned. Plot twists don’t quite add up. Potentially complex characters are written uninterestingly, despite having strong character motivations. Conflicts get resolved in a manner that is too shallow for the depth the film desperately tries to reach. And the cast renders middling performances, except for Dabula who consistently holds it down as the somewhat gentle but menacing Bra Sol. It’s a pity that the film gives him too little to work with in terms of content and screen time.

It doesn’t help that the most important stories end up feeling out of place. Set just a couple of days to Freedom Day, and with painfully obvious dialogues about whether there is truly freedom in South Africa or how black South Africans are more tolerant of white people than other black people, amongst many others, Collision attempts to make strong statements on racism and xenophobia. But nothing ever really sticks. The topics don’t get incorporated with any real feeling, and they come across as nothing more than fillers used to achieve the needed 99-minute running time while endowing the film with faux importance.

Considering the quality of the South African films that have been put up by Netflix in the years since the streaming giant stepped foot on the African continent, Collision is the bottom of the barrel. It is generally well shot and has important themes, but too much about it is non-committal. It’s simply not interesting enough.

(Collision is streaming on Netflix here).