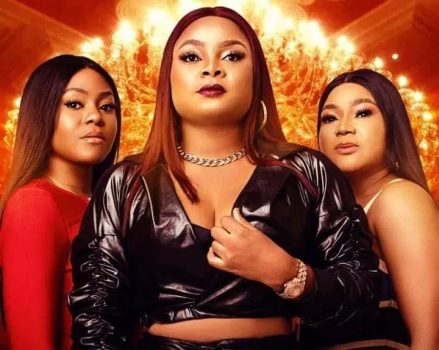 Head Over Bills Review: Of Wasted Potentials and Squandered Opportunities

Perhaps, a story like this one would be better suited to a television series. But at two hours, Head Over Bills does too little with the time it does have…

It’s very sad when a filmmaker has a decent premise and the opportunity to cast some remarkable actors but wastes them on a poorly executed film. This is what happens with Head Over Bills, the Dabby Chimere (Atarodo) movie which premiered in cinemas this February. In this movie, Chimere creates characters with the potential to be complex and a story with depths to explore, but she can’t figure out what to do with them or how to make a movie out of them. And it is a pity that talents like that of Bimbo Ademoye (Gone , Sugar Rush) and Shaffy Bello (2 Weeks in Lagos) waste in the process.

Bello plays Elizabeth Ofili, the wealthy CEO of Starlight Group, a top company which she built from the ground up while raising three daughters alone after the death of her husband. Rachael Okonkwo (Small Chops), Ademoye and Ego Nwosu (Fine Wine) are cast as Oluchi, Cheta, and Muna respectively, Madam Ofili’s daughters. As the matriarch’s retirement draws close and questions are raised as to whether any of her daughters will replace her, she calls a family meeting and threatens to cut them off financially if they fail to get their acts together before the end of the year.

The three daughters are clearly privileged, but Oluchi and Cheta are the spoiled ones, with Oluchi known for her lack of respect and Cheta famous for her extravagant spending. Muna, on the other hand, works in Starlight and is the only daughter poised to take after their mother. But with their mother’s threat hanging over all their heads, each of them has to work towards earning her approval. Of course, they all go about it in their own different ways, motivated by very different problems.

Oluchi brings home a pretend fiancé after being blackmailed with a sex tape; a bad breakup is Cheta’s wakeup call; and despite her mother’s refusal to appreciate her efforts and sacrifices, Muna hides a relationship that she thinks her mother will disapprove of and makes a problematic choice on her mother’s account as penance for a guilt that she has carried since she was born.

The movie opens in 1990. A younger Elizabeth is in labour, her two little girls sitting outside, when she finds out that her husband died on the way to the hospital. Then, the movie jumps to 2021. But as we follow the Ofili women, we are taken back to 1990 a couple more times as the film tries, painstakingly, to illustrate how the matriarch wound up raising three daughters on her own and building an empire at the same time. The impression this creates is that the movie plans to provide as much background and detail as possible. But in reality, the aspects of the story that truly need fleshing out are never given enough attention.

For instance, in Head Over Bills, it’s never clear what the Starlight Group’s business is, as integral as the company is to the movie’s plot. We don’t ever get to understand why the two older sisters are so imprudent despite having a mother who built an empire out of nothing. We are expected to believe that Oluchi is doing great things with her life, but the only thing we ever see her do is get blackmailed, and we only know that she works with NGOs because her blackmailer suggests that she pays him with NGO money.

Cheta starts her own business which is announced to be doing well, but we never see the business function. Muna works very hard on presentations we never really see, and deals we only ever hear of. And business competitors get engaged to marry but never go back to discuss how to manage the conflicts of interest that are sure to arise.

In fact, major changes happen and characters grow tremendously off screen, making it seem like there are missing scenes and creating a distance between us and the characters, particularly the protagonists. One thing that makes a protagonist a good one is their ability to evoke empathy such that no matter what they do, filmgoers still root for them. It is this empathy, according to psychologists, that explains the large following gained by Joe Goldberg, the violent stalker and protagonist in Netflix’s hit series You. But in Head Over Bills, there is no character truly worth rooting for because none of them is made emotionally available enough to arouse empathy.

Muna is clearly the most interesting character in terms of complexity. Even though she’s seen as her mother’s favourite by her sisters, she is the one who seeks their mother’s approval the most, carrying emotional and even physical burdens that are as old as she is. But those burdens are barely explored, with the exception of one slightly drunken scene that literally pops out of nowhere and leads to a strange scene where her mother’s butler gives her a strange little speech about the burdens she bears.

The result of the inadequate handling of Muna’s character is that the only reason to be invested in her, if any at all, is that everyone wants to see a responsible person win. If Nwosu had been given more to work with, she might have been able to portray Muna’s complexities. But the screenplay gives her too little to utilise, and though she holds the fort as the one reliable daughter, it is really Bello and Ademoye who give the movie what little strength it has.

Despite the movie hinting that she is still dealing with the loss of her father, the only reason to care about Cheta is that she’s played by Ademoye, who manages to power through the poor execution around her. And as for Oluchi, there is nothing even remotely interesting about her. It certainly doesn’t help that Okonkwo never seems to fit in with the cast or in the oldest daughter’s role.

Granted, it would be very difficult to properly explore both the complexities of the multiple protagonists and the depth of the plot in a feature film with limited time. Perhaps, a story like this one would be better suited to a television series. But at two hours, Head Over Bills does too little with the time it does have. It focuses on the wrong things, like unnecessary flashbacks, superfluous secondary characters, a pet dog that disappears from the story, and unconvincing, sparkless love stories.

Cheta’s love interest, Michael, played by Emeka Nwagbaraocha (Rattlesnake: The Ahanna Story), is a 25-year-old who looks 20, wears nerdy glasses, is brilliant enough to get a job at a top firm in the United Kingdom, and has a PhD. She employs and pays him to help her figure out her finances, which he does by making her cancel unnecessary expenditure from a list. We know he’s a genius because everyone says so (and, of course, he has that PhD), but we never actually see him do anything exceptional. And it’s not just the love stories that are unconvincing.

In this movie, a woman wakes up from sleep, after a one-night stand, with a freshly made-up face and a wig that does not so much as shift. Some scenes are over-flogged, while some others are too cringeworthy to sit through. Most of the supporting cast perform too poorly.

For all the talk of millions and billions, the best location we get is the front view of a mansion, and all that money barely reflects in the wardrobe, or the sets, or the impersonal rooms in the rich people’s buildings. And while the four Ofili women, in their older years, look like they could be genetically related, there are stark differences between the Ofilis in 1990 and in 2021 such that growth cannot justify the questionable casting choices.

It calls to mind the casting of Toni Tones and Sola Sobowale as Eniola Salami at different ages in Kemi Adetiba’s King of Boys  franchise, where the original film justified the casting choice by clarifying from the start that Eniola Salami actively bleached her skin as she aged. Head Over Bills provides no explanations for its casting inconsistencies, as if the Ofilis’ wealth can explain their genetics in the same way it explains their fame or class.

In Head Over Bills, what could have been a rich cinematic work buoyed up by some very talented Nollywood acts is reduced to a merely watchable comedy of sorts. It could have been worse, but it isn’t much good.