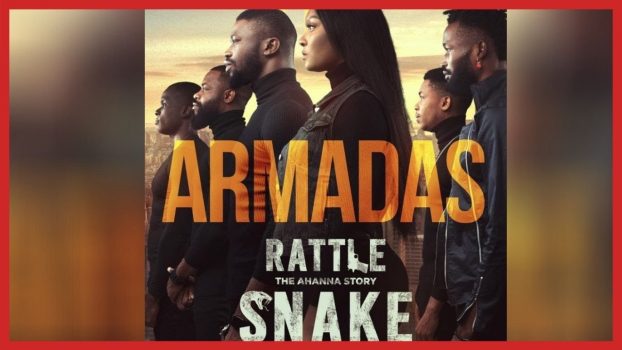 Movie Review: “Rattlesnake: The Ahanna Story” Is Exciting And Exhausting All At Once

The unexpected success of Ramsey Nouah’s Living in Bondage: Breaking Free – the 2019 sequel to Chris Obi Rapu’s 1993 Living in Bondage – raised the bar for reboots and remakes of Nollywood classics: anyone who was going to try remaking the oldies had to come correct. Add to that, the reputation garnered by the original Amaka Igwe classic, Rattlesnake, as well as the pressure to do better with each project – Living in Bondage: Breaking Free was Ramsey Nouah’s directorial debut— and it is clear that one of Nollywood’s finest actors had his (directorial) work cut out if he was going to make something memorable.

Rattlesnake: The Ahanna Story is a 2020 crime thriller written by Nicole Asinugo, directed by Ramsey Nouah, and produced by Charles Okpaleke of Play Network Studios: all three had previously collaborated on Living in Bondage: Breaking Free. A remake of the 1995 Amaka Igwe classic, it stars Stan Nze as the eponymous character alongside Bucci Franklin, Osas Ighodaro, Efa Iwara, Emeka Nwagbaraocha, Odera Adimorah, Chiwetalu Agu, Norbert Young and Ayo Makun (AY), among others. The film tells the story of Ahanna Okolo (Nze) who is only seven when he witnesses a mob lynching, and has his father tell him that it is only the poor who experience jungle justice. After his father mysteriously dies, his mother moves to Lagos with his siblings and uncle, leaving him behind in the village.

Unable to find employment after graduating from the university, Ahanna returns to Lagos to find his family, but is shocked when he discovers the secrets that his mother and uncle hid from him. He falls into disillusionment, but he soon reunites with two of his old friends, Amara (Ighodaro) and Nzenozo (Franklin). Following a series of fortuitous events, they assemble a group called the Armadas. Frustrated with a system that makes the rich richer and the poor poorer, they carry out a series of heists and bulldoze their way into riches, but their operations soon put them in the crosshairs of dangerous people. Rattlesnake: The Ahanna Story starts strong. It opens with a monologue playing over a jungle justice scene, a man being burnt to death as 7-year-old Ahanna watches. This is the first key moment that shapes the life of the protagonist, but it also shapes the expectations for the rest of the film. The monologue continues from time to time as Ahanna narrates his story with a soothing voice, retrospective and innocent. This narration is essential to the film because it often paints a clearer picture than the screenplay allows the actors to portray. When it comes to action movies, Nollywood has a pretty bad reputation, so in comparison with many other Nollywood action thrillers, this film is an impressive watch: you don’t see gunmen looking in all the wrong directions trying and failing terribly to emulate foreign films. The action scenes are not badly choreographed, and (thankfully) the gunshot wounds do not look ridiculous even though they seem to heal a little too quickly. The death scenes look believable, and though some of the acting feels either over-rehearsed or inadequate, the performances are mostly solid.

What the film deserves the most praise for is its cinematography. From the camera movement to shot composition to focus, the defining scenes in the introductory act are filmed with such profound intention reminiscent of Hollywood’s Moonlight, the 2016 coming-of-age Oscar-winning drama. Even the casting of the actors depicting Ahanna at three different ages is deliberate, and bears a similarity to what was done with Moonlight’s protagonist.

Rattlesnake is a heist movie, and like most heist movies, it works hard to feel grand and complex. This might be the root of all its flaws. It attempts to hold a gang leader who is a genius and gang members with special skills, and it tries really hard to present their operations as sophisticated, but there is really nothing masterful about the heists.

Worse still, the desperation to achieve complexity goes beyond the operations of the Armadas, and seeps into the plot itself. There is too much happening in this film. There are enough heists in this film to carve out a trilogy. It spins a Robin Hood narrative that feels very unoriginal. Some of the scenes also drag on for too long: the movie could have done without the time-wasting South African vacation, the lavish parties, and the tiring commercials. There are hints at a movie crossover (with Living In Bondage), and the overall layout of the movie is not disastrous, but you just feel that this film is never sure what story it wants to tell.

It is probable that the desperation for a complex story arose from the need to set the film apart from the original Rattlesnake. However, it might have served the movie better if the filmmakers leaned more towards retaining as much of the original story as possible. This remake sacrifices depth for pageantry, and some of the changes are even for the worse. For instance, while the more sophisticated skillset of the Armadas in the remake might be appealing to newer generations because of our “sophisticated” tastes, they don’t account for much during the heists.

Ultimately, Rattlesnake: The Ahanna Story is entertaining and exhausting all at once: with a running time of two hours and twenty-five minutes, it never seems interested in coming to an end. But at the same time, it leaves you tingling with pride at the fact that filmmaking in Nollywood has grown in leaps. The industry has improved in filming action scenes, and moviemakers are a lot more comfortable with crafting new stories while still being unapologetically Nigerian. Nollywood is getting less predictable, but it is yet to learn how to be concise rather than overbearing. It still has a long way to go.