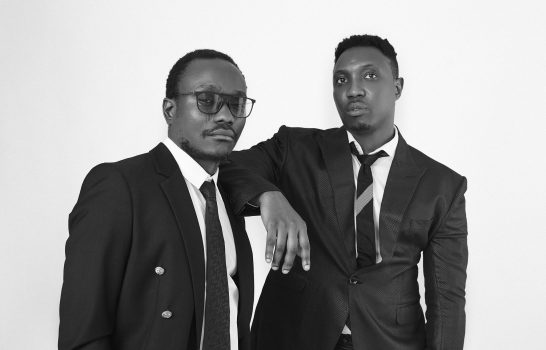 “Ethos” is a Fruitful Bromance Between A-Q and Brymo

Barring its minimalist title, Ethos offers bigger expectations from the get-go. The title foreshadows a near-exhaustive commentary on its protagonists’ moral trajectories…

You should not think of Brymo and A-Q in the same studio without remembering their connections with Chocolate City Music. The record outfit used to be the fodder for both artistes until they left, at separate times, to negotiate new directions for their music careers. It was in 2020 that A-Q, who was co-founder of 100 Crowns, a subsidiary of Chocolate City, which had Blaqbonez as one of its protégés, called it quits with the record label to chase loftier dreams with Africori.

Brymo’s break-up saga was rather tempestuous. That was way back in 2013. The singer alleged, amidst other grievances, that the label failed to advance the recording of his album, The Son of a Kapenta. Chocolate City Music had accused him of a breach of contract. The bad blood between the artiste and the label was escalated to the court, with the legal outcome inspiring a wave of disillusionment. Since that experience, Brymo has remained independent as an artiste, preferring to self-pilot the business of his music. Now he sees record labels the world over as capitalist profiteers.

Here on Ethos, A-Q and Brymo form an album-long alliance, fusing techniques of hip-hop/rap and alternative music. Brymo’s style, cutting across R&B, Pop, Fuji and Rock, sets him apart from mainstream music in the country.

“After like over a decade of peddling what I sell, I have become a mishmash of a lot of things,” the singer admits the uniqueness of his art in an interview. Again, intoxicated by revolutionary, anti-mainstream spirits, he says, “I paint pictures with words, I’m a sonic artist.”

But Brymo’s avant-garde style does not breed much elitism. People have found his art of sonic rebellion mostly relatable, his music incorporating social consciousness, personal ideology and didacticism, despite the man himself having a personality dressed in controversies (catch him elucidate his self-hype as “the most powerful artiste in the world”).

The word, “Ethos” is of Greek origin and refers to beliefs, principles and values associated with a person. Coincidentally, Brymo’s last album, Theta (2022), was named after the eighth letter of the Greek alphabet.

Barring its minimalist title, Ethos offers bigger expectations from the get-go. The title foreshadows a near-exhaustive commentary on its protagonists’ moral trajectories. You expect the storytelling, cocky English bars of A-Q; cocky bars such as the ones last delivered in “The Last Cypher,” that valedictory track of L.A.M.B’s (Loose Kaynon, A-Q, M.I Abaga & Blaqbonez) Behold the Lamb project, wherein, at the point of entry, he spits: “Fuck that whose the best rapper in Africa shit, It’s time to really rap/All dem rappers trash to me now, check dem recent tracks.” But the most treasured totem of A-Q’s rap genius probably remains God’s Engineering (2020), the project which fetched him Best Rap Album at the 14th Headies Awards.

You expect Brymo, as co-protagonist of Ethos, to be seen inside out, so that his bare-boned character, the Über-confident creature in tweets and interviews, takes center stage. Perhaps this mode of revelation would be as confrontational as his “Dem No Born Us Together” song from Theta. Somewhere in that song, Brymo reacts: “Dem no born us together, oh oh/Why you look for wahala?/You dey look for my trouble, ah.”

Ethos begins with “Won De” which has A-Q presiding over the verses while Brymo rehashes the chorus. A-Q rhymes out the story of his rough upbringing and rise to fame. You can catch some distant references, such as the mention of Josh2Funny and Hushpuppi, the former a comedian and the latter a reckless-spending fraudster. But these are only casual, on-the-spur mentions. You also catch, at least, a double entendre in the line, “Before they made phones that Rome, I was roaming these streets no network.” The rapper toys with our understanding of “roaming” as both in its literal sense of aimless wandering and its telecom-technical sense of accessible phone service outside its registered region. There’s also a conceivable third sense. Rome (success) wasn’t built in a day (not achieved overnight), so the rapper long roamed these streets (tried and tried to succeed) without network (not having the right connections). Perhaps, a case for triple entendre.

Brymo wants to remain a maverick en route to his sonic destiny. It all makes sense when one relates it with his resolve, since the Chocolate City fallout, to avoid record labels and take full responsibility for his music. Despite this audacious awakening, Brymo has had his fair share of recognition and success. In 2021, he was awarded Best Recording of the Year for his single, “Ozymandias,” at the 14th edition of the Headies. In the just concluded 15th annual Headies Awards, Brymo received six nominations in the Best Recording of the Year, Songwriter of the Year, Best “Alternative” Song, Best Vocal Performance (Male), and Best Alternative Album and Album of the Year categories.

One grows deeper into the enchanting, poetry-high and urbane consumerist world of Ethos with “This is War,” and “Timezones.” “This is War” has Brymo and A-Q taking turns to air their perspectives on the philosophy of selfhood. Here in these lines, A-Q uses Biblical allusion to resist hate and malicious intent:

“You Judas, I’m not Jesus, I’m done sacrificing myself for your sins/Tell me I’m free, I promise I’d leave if you promise/To leave out my kids from this beef/Stand at ease, lower your weapons/There’s nothing worth fighting for but freedom and peace.”

In “Timezones,” the narrative is not so clear, but keeping close, you understand that the theme of nonconformity is in motion.

The next two tracks in the album espouse love. “Do You Ever Miss Me” is a well-contrived love-struck outpour. A-Q’s lines help us to visualise romantic love as some substance addiction, tough to control, when he raps: “An overdose of you I can’t remove you from my system.” Beyond this sort of metaphor, there are engrossing wordplays that create subtle contradictions, such as:

“Never been the type to get carried away/I rather carry you on my back no matter the weight/It was a party for me when you parted the waves/I walked into my path I was partly enslaved.” 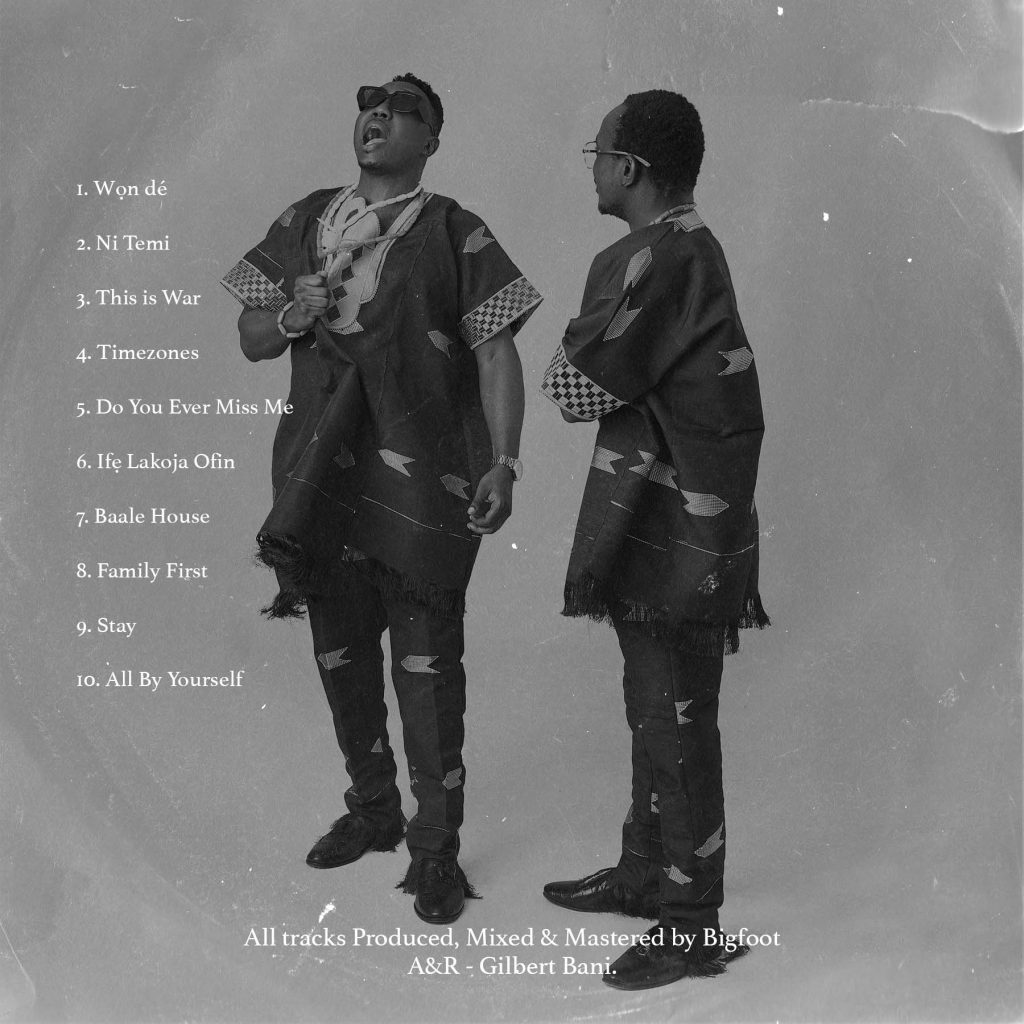 “Ife LakojaOfin” is rather draggy. It seems the song’s pace is deliberately delayed to compensate for its lyrical sparseness. Not so like “Do You Ever Miss Me,”  this song imagines love in relation to longevity. When you are young, for instance in your twenties, Brymo implies, and everyone agrees, your reality of love is likely to be experimental and recreational. In your fifties, you imagine, and everyone would agree, too, that the decline of lust-driven, spontaneous romance is unavoidable. But Brymo, somewhat counter-intuitive, assures, over the chorus, that his love, at fifty-two, breaks this unofficial societal law.

The first and only unmistakable evidence of satire in the album is “Baale House” where communal underplay and satirical overtures meet. Not everyone, by now getting spent in the album, might be pleased that A-Q has delayed this long before bringing real social issues onboard. But it is choice. Perhaps, too, left to Brymo alone, the song would have gone the way of “Market Square” in Theta, recreating a fairly sustained traditional background. However, with tidbits of references to cybercrime, ritual killing, religious falsehood, political unrest, terrorism, etc., A-Q chooses an expansive commentary that contradicts the seemingly village-setting mindset of Brymo that is proposed from the outset.

As the album winds down, one expects a sort of anticlimax. This feeling is disappointed when there is no dumbing down, as A-Q comes out all smoking hot in “Family First.” Its lyrics are unravelling as much as unsettling. The rapper suggests a beef between him and M.I Abaga whom, nonetheless, he respects. Is this stage-managed? Some customary rap swipe for promotional sake? It is not too defined. Back in April, 2020, A-Q and M.I Abaga released a joint EP, The Live Report, although this was before A-Q left Chocolate City Music. M.I Abaga, on the other hand, had bowed out of the label a month to the collaborative project. But, even after then, both rappers have apparently remained in each other’s good books as they recently turned up for the 2022 L.A.M.B project.

Now, on “Family First,” A-Q raps around his soured relationship with M.I and some Chocolate City brouhaha.

“Same finger you point with is your trigger finger, let it off/ We can let the dust settle or raise hell, I’m barely touched/It’s the return of Machiavelli, you already lost.”

Machiavelli, an Italian Renaissance thinker, is linked to the philosophy of Machiavellianism which validates the use of coercive means to assert authority and gain influence. In his controversial work, The Prince, he writes, “It is better to be feared than to be loved, if one cannot be both.” For A-Q, this is an eye-opening moment as he usurps the Machiavellian image so that he appears uncowed and in control.

As in an afterthought, Brymo shows up in “Family First” to conclude, but this is after A-Q has paid tributes to family, including his late father. There is a spillover of this tribute-paying and family-centred monologue in “Stay” where A-Q suggests “There’s friction in our home, but I’m fixing up my tone.”

In 2021, music producer, Beats By Jayy, who was closely associated with Chocolate City Music, died of COVID-19 complications at the age of 28. A-Q spares some moments for the deceased fellow in “Family First” and “Stay.” Somewhere in the latter, he raps: “I’ve been immortalizing Jayy like I ain’t thought about you once.” As experiences of family friction and a friend’s untimely demise are relayed over verses, the Brymo-powered chorus tempers the poignant atmosphere with motivational allure.

Grief had smeared the path of A-Q. At a young age, he lost his father and two brothers (Golden and Kingsley). While he has struggled to overcome the trauma, he is now committed to taking care of his mother. The last three songs of this album are taxed with the purgation of this trauma. So, when Ethos leaves us with some somber, elegy-like “All By Yourself,” it’s a slight reminder of that age-old but less appealing  Thomas Hobbes’ quote that human nature is “solitary, poor, nasty, brutish, and short.” Fortunately for us, the song is not all over such Hobbesian pessimism, and Brymo reassures, “It’s alright, it’s alright.”

Adedamola Jones Adedayo is a teacher, writer, and literary arts & popular culture critic. He is particularly interested in African writings, films and music. Reach him at adedamola767112@gmail.com.On Facebook, he is Adedamola Jones Adedayo, on Instagram @adedamolajonesadedayo, and on Twitter @AdedamolaAdeda4.