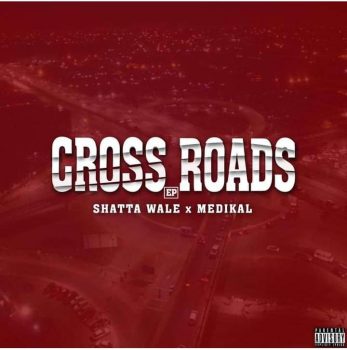 Both artistes effortlessly flow with each other to craft a collaborative project, a rarity in the competitive Ghana music industry…

Shatta Wale and Medikal are uncommon collaborators. The Ghanaian duo met in October 2021 during their self-inflicted fiasco with the Ghana Police Force. Shatta Wale, on one hand, was arrested  after he created a fake story about being shot. Medikal, on the other hand, was arrested for brandishing a gun on social media. Coincidentally, Shatta Wale and Medikal were in the same cell. They connected, and took it a long way after they left the cell by linking up to record an extended project which documents their lives, tribulations, victory, and many more.

Shatta Wale is an icon in the Ghanaian music industry. He reached higher heights when he featured on “Already,” a track from Beyoncé’s The Lion King  album which also featured Major Lazer. Wale was one of the few African artistes featured in the music video alongside Queen B. Wale’s life took a turn for good ever since then, and beyond some controversies, he has been an awesome artiste.

Medikal has released five projects since he started music about a decade ago. Born in Accra, the 28-year-old rapper and songwriter won MTN 4Syte Video Award in 2016, and currently boasts more than 74,000 monthly listeners on Spotify.

Cross Roads was announced while both artistes were on their US tour two weeks ago. The EP was exclusively licensed to BoomPlay, a platform that had been at the forefront of Africa’s music distribution. However, Cross Roads had been sparsely promoted. Beyond one or two posts on the artistes’ pages, nothing much can be found about the project. It makes you wonder about the expediency of the project. Is this a song dump? Are they up to something? Why, really, was the project released?

Shatta Wale and Medikal kick bars on the piano-pivoted opening track, “Too Stubborn.” It is familiar terrain for Medikal as he takes the first 16 bars. They are braggadocious, uplifting, and mocking, all in the same breath. No doubt, he is in his feelings. The years of hard work already paid off; just like he said, he is not rich, but wealthy. Starting the album with a gooey sound gently eases the listeners into the album, and almost all the follow-up tracks follow this template.

Wale’s proclivity for controversial, needless beef is legendary. He knows when to strike the bee’s nest, and he is unconcerned if he gets stung. It is believed that most of his actions are a ploy to stay in the news, maintain his status, and win him new fans. “Why Always Me” is a play on words of the saying of the Italian footballer, Mario Balotelli. The song serves as a plea for mercy, a retribution to the enemies, and a pacifier to aggrieved fans. Its rhetoric, nevertheless, offers Shatta Wale an opportunity to express some of his points.

On “Small Nyash,” Wale and Medikal take it to the club. The song is a recollection of an encounter with a lady of the night. The minimalist lyrics swiftly flow into the superb production.

“DTB” which stands for Deeper Than Blood is a copious tribute to Dancehall with both artistes coming with their vocal onslaughts. The production is minimalist, with drums, sticks, and baseline highlighting it. It’s a fine-toned piece of work. Medikal and Wale complement each other, but as expected, Wale had the upper hand on this song.

“Lover” taps inspiration from Wizkid’s “Joro,” and Gyptian’s “Hold Yun.” The lyrics are flat. When they both try to win the girl over, they struggle with it. “Lover” is spiced with low tempo instrumental with the kick poignantly serving as the lead. By the time they come to the end, it is glaring that it was something of a “Joro” cover.

“Religion” is a nod to drill, a track tailored to show Wale’s versatility with the genre. Medikal’s menacing lyrics take you off guard; “F-ck the system/ I am the system.” The lines are cocky, but you’re going to love it. “Religion” is a fine offering that exposes a new dimension to both artistes’ artistry.

Cross Roads is sonically varied, calm on one end, and chaotic on another. A glaring example is “Sweety.” Its mixing and mastering make the track less desirable. While it is club-tailored, it needs more production tweaks. Wale and Medikal are proud artistes, and here they show it from a different perspective. Rising over an industry that constantly gave them nos, to reaching their current status requires some level of stubbornness, tenacity. Both artistes have an ungodly dose of this.

“Takashi” is a Japanese word that means dutiful, ambitious. On this penultimate track, both artistes revel in their successes; features on CNN, more money, cars. It’s a bittersweet retelling of a story with a happy ending. The project ends with a child-like conversation between Wale and Medikal.

Spread across ten tracks, Cross Road is a bubbling body of work that seamlessly sashays between Dancehall, Afrobeats, AfroPop, and HipHop while wrapping reflective, celebratory stories about friendship, life, love, and values.

Both artistes effortlessly flow with each other to craft a collaborative project, a rarity in the competitive Ghana music industry. Shatta Wale and Medikal deserve all the praise for producing a superb project. Its conciseness aids its replay value. In all, rather than compete, they both complement each other.

Emmanuel Daraloye is a Music critic with over 300 album reviews in his archive. His bylines have appeared in The Cable Newspaper, The Lagos Review, Vanguard Newspaper, Legit News, Rank Magazine, Independent Newspaper, Modern Ghana Web, Nigerian Tribune, and others.