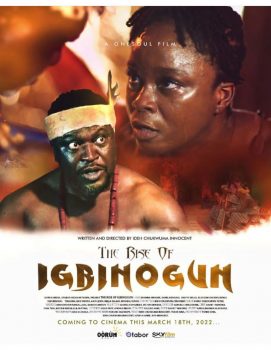 “The Rise of Igbinogun” Review: Ideh Chukwuma Innocent Brings “epic” to the Cinemas with His Latest Addition

The Rise of Igbinogun does not hype its presence. It does not try so hard to please…

Since the Aba Women Riot in 1929, and movies like Wives on Strike, and Madam President where women in lead roles sends the message of feminism, it is likely for viewers to misconstrue Ideh Chukwuma Innocent’s new movie to be a nod to the feminist movement. However, The Rise of Igbinogun is far from soothing the female gender, but rather expresses the persevering power of love.

During the movie premiere on the 15th of March, 2022, StarTimes expressed their excitement about working with Innocent a.k.a Onesoul (Dear Ijeoma, Discontent) to release the movie in the cinemas. The movie captures the heart of viewers with its ancient setting, and musical folklore, which serves as a method of cultural preservation.
The lead is Igbinogun, played by Damilare Kuku, a Nigerian writer and actor.

A Nigerian retelling of the “RobinHood” story, Igbinogun plays a young, rebellious woman who leads a gang of thieves whose sole aim is to steal from the rich and give to the poor. Believing it was her destiny to save her people from a tyrannical leadership, her father, Ogbu (Enyinna Nwigwe, Wedding Party 2, Cold Feet) trains her to be stronger than men her age.

Opening with warriors prepping for battle, a fight for the title of the undefeated, a younger Ogbu questions the favour the priestess has found in him, and discovers her feelings for him. These feelings draw her to treason since the priestesses are betrothed to the gods, as she begins an improper relationship with him. On finding this out, the king sentences her to death but delays it on Ogbu’s plea for her to give birth first. After Ogbu breaks her out from prison, she goes into labour and is unable to move, with no help forthcoming and stuck in the rain. Ogbu goes for help, but returns to meet the sight of his daughter and his lifeless lover on his return.

Deciding to wrestle for the title of the undefeated, Igbinogun asks for her father’s blessing, and her blind grandmother (Tina Mba, Nigerian Prince, Gidi Blues) does a ritual of sanctification on her, reflecting ancient & traditional practices before she leaves for the palace. After defeating everyone, Igbinogun fights the prince (Blossom Chukwujekwu (Who’s the boss, New Money) who, upon losing, commits suicide. Tied up in the palace, Igbinogun reveals her identity to the king. In an attempt to kill her, the king is murdered by Ogbu. Having lost her husband and son, the queen (Shaffy Bello, Chief Daddy, Elevator Baby) decides to return to her hometown and leaves the throne empty.

The “epic,” an unusual genre in the Nollywood cinema, is brought to life in this flick. The movie’s ability to use suitable props for each scene is an appealing sight, from the ancient pots of sanctification handed to the warriors before their battle, to the use of cowries to read revelations and make incantations, to the use of gold to represent a notable measure of exchange. The skilful conveyance of the story as well as the use of special effects like thunder and rain was smooth. The movie displays this story in a smooth flashback, with communication intact and the viewers actively engaged. The cinematographer, the entire post-production crew, especially the colourist and sound tech who made the movie come alive with their editorial skills deserve commendation.

It will be wrong to ignore the beautifully selected fabrics and style applied to the movie. The film does not fall short on fashion, and honestly, does not try so hard to please either. The wardrobe choices are impeccable, and their choice of costumes is admirable.

However, while the well-structured screenplay and skilful directing on Innocent’s part built an engaging story, the movie is flawed as it fails to give a detailed root to most of its character’s personalities, and although dramatic and extensively expressive, there is a flatness in most of the scenes. Conveying catastrophic moments in the most subtle manner, hence, killing the suspense, the movie dashes the expectant heart of the viewers. The movie overemphasises its plot and is less concerned on motive. Mba’s constant emphasis on Igbinogun’s fate and the repetition of the mission shows this.

The Rise of Igbinogun does not hype its presence. It does not try so hard to please. Viewers are rather thrilled by its graphics, and use of cultural artifacts to tell a story. A mere glance at the trailer will have one curious for more, especially the thought of seeing the featured A-list stars in a different light. Admitting the beauty of the work, the movie gets a standing sponsorship with Startimes. Falling outside the usual setting in vogue in the cinemas, and being a risky decision by Onesoul, it is safe to say that The Rise of Igbinogun is one of the best epics there have been since the days of Sango, and Igodo.