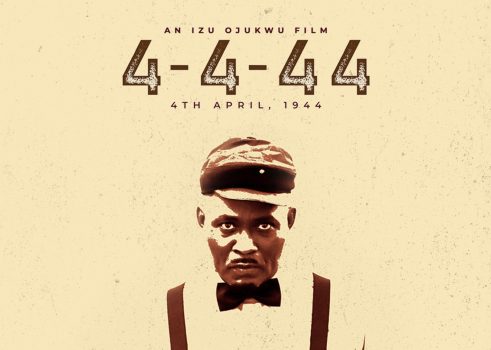 In 4-4-44, Ojukwu wants to draw you into the story. He wants you to dwell with his characters, and to experience their joys and pains with them. But, for some reason, Ojukwu has absolutely no trust in his audience’s ability to know what to feel without being expressly told…

There are few things in life as sad as a brilliant filmmaker losing their grip on storytelling. But that feeling of sadness you get starts to turn into fear if your faith in the filmmaker’s excellence stems from films you watched as an impressionable child. I had a love-hate relationship with Nollywood when I was much younger. Before I entered my teens, I was already an avid reader, an eager writer and a TV lover. So, I became aware of Nollywood’s bad storytelling problem early enough. But now and then, a film came under my radar that kept me invested in Nollywood. Many of them were directed by Izu Ojukwu. And because I followed the now-defunct Amstel Malta Box Office (early TV lover, remember?), Ojukwu’s films always came under my radar.

Released in 2006, Sitanda was my favourite Nigerian film for the longest time. White Waters (2007) is the reason I watch every film starring OC Ukeje. But when Amina premiered in 2021, I wondered if my sense of good storytelling had been too immature in the days of Amstel Malta Box Office. But I think about ’76, which I watched with adult eyes, and I am reminded that Ojukwu is actually a good storyteller. This is what makes 4-4-44 so disappointing. A love story and historical drama, 4-4-44 has a very interesting premise, an important theme, a talented main cast, and a director with a trusted track record. It seemed inevitable that it would be sufficiently executed, at least. And yet, it’s not.

(Read also: Izu Ojukwu’s Amina Is an Underwhelming Portrayal of the Legendary Queen Amina of Zazzau)

4-4-44 switches between two timelines, both of which fall comfortably in the somewhat distant past, but centres the same couple. It begins in the 1960s, where Nse Ikpe-Etim stars as Theresa, alongside Richard “RMD” Mofe-Damijo as Hillary, Theresa’s committed husband. It’s not their first time being married onscreen. Ikpe-Etim played the sassy ex-wife of RMD’s character in the romantic drama, Fine Wine. But the dynamics here are different. In 4-4-44, Ikpe-Etim’s Theresa is a sweet woman suffering from a mental illness while RMD’s Hillary is the man who loves and cares for her, despite pressures to leave her and remarry.

Their younger selves, played respectively by Efe Irele and Seun Akindele, fall in love in the early 1940s. With them, there’s the excitement of young love. They take walks, try new things together, and make those promises to each other that young lovers tend to make. Young Theresa waits impatiently for Hilary while he’s at sea. And young Hilary gives up working at sea so he can settle down with Theresa and find ways to help his community. There’s no mental illness yet. That comes later, the result of unfortunate circumstances created by a vindictive relative.

In its eighth minute or so, Veronica (Idorenyin Essien), the film’s narrator and the oldest child that Hillary and Theresa would later birth, comments on the irony of love. “Love, such a funny thing,” she says. “One minute, you want nothing to do with it, and the next, it starts to reshape your entire life.” This comment is, perhaps, the one useful thing about Veronica’s narration. When the mental illness comes, everything changes for Hillary and Theresa. But not their love. Never their love.

In their older years, Hillary has become a pillar of his community, but he has to lock the woman he loves in a room for her protection and their children’s. The smiles that were Theresa’s chief attribute are now few and far between. She has bouts of violence and moments of depression where she wanders about and pulls at her hair. When she calms down after one of her episodes and refers to herself as the mad woman he married, Hillary insists that he didn’t marry a mad woman. And when she goes missing in the middle of a scandal that could send him to jail, Hillary walks out on law enforcement officers to go in search of her. But there are good days, too, where she holds her children close to her as they sleep or where she smiles and plays coyly with her husband as Veronica watches from behind a curtain.

(Read also: Izu Ojukwu’s 76 Excels as a Period Piece with a Knack for Detail)

In 4-4-44, Ojukwu wants to draw you into the story. He wants you to dwell with his characters, and to experience their joys and pains with them. But, for some reason, Ojukwu has absolutely no trust in his audience’s ability to know what to feel without being expressly told. So, he holds your hands and leads you, pointing at everything like a tour guide. Explaining everything with painfully awkward dialogue and a needless voiceover delivered by an insufficiently-directed young actor. There’s an occasional spiritedness in the dialogue, especially in the first act, and there’s some humour sprinkled across the film to get us through. But most of the time, the dialogue is so heavily expository and forced.

In fact, it’s just exposition dump after exposition dump with this film. When Hillary and Theresa fall in love, Veronica’s voiceover explains to us that her parents are falling in love. When Theresa has one of her episodes, Ojukwu makes sure we can hear the voices in her head and see the images she sees, with the colour of those scenes adjusted for effect. But it’s more jarring than disturbing, and feels too unnecessary. When she has one of her few good days, Hillary’s cousin (Atunyota “Alibaba” Akpobome) — who has been part of their lives the entire time, by the way — has to ask how long the good days last so that Hillary can inform us that it could be days or weeks or months. Even the film’s pivotal moment, the sequence from which it draws its title, is used only as a channel for a hasty exposition. It takes over an hour to get to that point, but the sequence itself lasts for less than two minutes and is accompanied by that voiceover again, repeating things that have been made clear onscreen and throwing in a science lesson for good measure.

A master of period settings, Ojukwu also wants to immerse you in his place and time. The entire film spans between 1943, when the movement for Nigeria’s independence was starting to gain momentum, and 1960, the year of Nigeria’s independence. The opening scene is set on Independence Day itself. Ojukwu doesn’t go down the celebratory path like Kunle Afolayan did in October 1, since his central characters are dealing with peculiar circumstances that keep them locked within their characteristically high fences. Still, he imbues every element of the film with the signs of the time, from music and costume to how his actors speak. But what would have made it all really come together is the film’s set pieces. Credited with many of Nollywood’s best set designs, from ’76 and October 1 to Lionheart and The Milkmaid, there are glimpses of Pat Nebo’s excellence in the production design of 4-4-44. But Pit Kreil’s shy cinematography fails to do justice to Nebo’s design. Kreil’s apparent obsession with close ups and over-the-shoulder shots may be useful in the more intimate scenes, but it isolates and blocks out the film’s physical setting, directly working against Ojukwu’s goal to submerge. Then, there’s the unimpressive editing. Believe it or not, there are scenes in this film where onscreen elements are visibly copied-and-pasted into the frame.

Even the acting doesn’t impress so much. Ikpe-Etim is believable enough, so much so that it makes Ojukwu’s need to over-explain even more frustrating, but it’s not quite the powerhouse performance. RMD brings tenderness and level-headedness to Hillary, but not nearly enough angst for a man drowning in so much uncertainty. Try as they may, Irele and Akindele are simply not infectious enough as young lovers. As for the minor cast, there’s not a lot of good acting. A few stand out, though. While Essien’s voice acting leaves a lot to be desired, she’s very interesting to watch when she’s onscreen. Michael Pankyes John plays his role as the younger version of Hillary’s cousin with a surprising precision, and he’s funny even though he doesn’t try to be. And did I mention that Chiwetalu Agu is in this film? And his signature style of incorporating catchphrases (in this case, “God’s blessing has gone from bad to worse”) has not gotten old?

There’s so much that this film could have been. Love stories like the one here often become classics. If, while you read this review or watch this film, you wonder whether 4-4-44 is supposed to be some reverse version of The Notebook —with less of young love and more of adult pain —you wouldn’t be too far off. It sometimes feels like it. But unlike the beloved Hollywood film famous for its sappy, unrealistic tale, 4-4-44 is based on a true story. Hillary and Theresa were a real couple. The real-life Veronica is even featured at the end of the film, where she’s telling her parents’ story to a writer who has his back to the camera — just before we’re thrown into a misplaced scene involving Broda Shaggi and Teni the Entertainer. (No, you didn’t read wrong, I’m indeed talking about the comedian and the musician.)

But 4-4-44 is a film, a visual simulation of the story of Veronica’s parents. It does not need that extensive voiceover that does more to distract than to emphasise. What it needs is more ambition and better execution. It needs to mesmerise, to be more passionate. Sadly, 4-4-44 fails to find its spark. Here, Ojukwu has missed a rare opportunity to do something great.

Vivian Nneka Nwajiaku, a film critic, writer and lawyer, writes from Lagos. Connect with her on Twitter @Nneka_Viv and Instagram @vivian.nneka