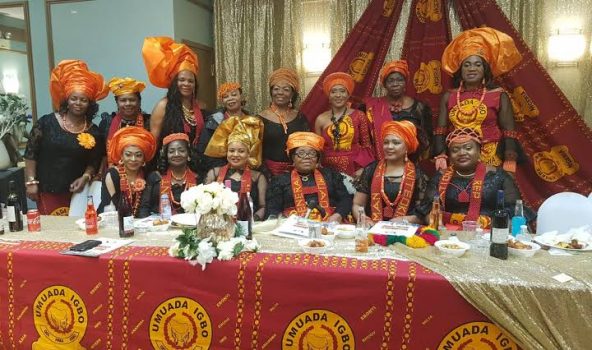 As a result of globalisation, the Umuada has broken into units and expanded all across the world. The group now incorporates state-level bodies and executive heads. The Umuada is certified and registered by the Corporate Affairs Commission, Abuja, under CAMA of 1990, with its headquarters in Enugu State…

Nigeria has sold to its citizens a patriarchal belief system, and although women are given participatory rights in a few enlisted cases, the system still preaches dominance of men and submissiveness of women. Gender roles in society dictate that girls are expected to be homely, polite, and nurturing, while boys are expected to be strong, bold, and aggressive when necessary.

The Yoruba tradition, like other patriarchal traditions, tends to espouse male supremacy over female subordinances. However, some things cannot be accomplished without the influence of women. As their confidant and companion, the success of many men has been attributed to the covert contribution of their wives, and many who have fallen or lost relevance have their failure attributed to their spouse’s disloyalty.

In the Egungun religious system, the roles of women are important. Although they operate mainly in the background, their presence is required as they play leadership roles, especially as it concerns rituals.

In Igboland, for a long time, a female group has reserved relevance and participatory rights in the culture. The faction known as the “Umuada” is a group of women whose ancestry can be traced to a particular village or community. The group features in Chinua Achebe’s Things Fall Apart famous to many for its role and appearance at events in the community and peacebuilding roles in Igboland.

As an administrative agency in traditional Igbo societies, the group has enormous powers, and is invited to intervene in kindred issues and contribute their opinion as peacemakers on pressing issues in the community. Respected for their history of unbias and incorruptible judgement, the Umuadas across Igboland intervene and help resolve disputes. In Osomala in Anambra state, the Umuada say they owe their allegiance to Ohai, the visionary deity. It is believed that the deity endows most of them with gifts of foresight to foresee dangers to come and protect the community from them. 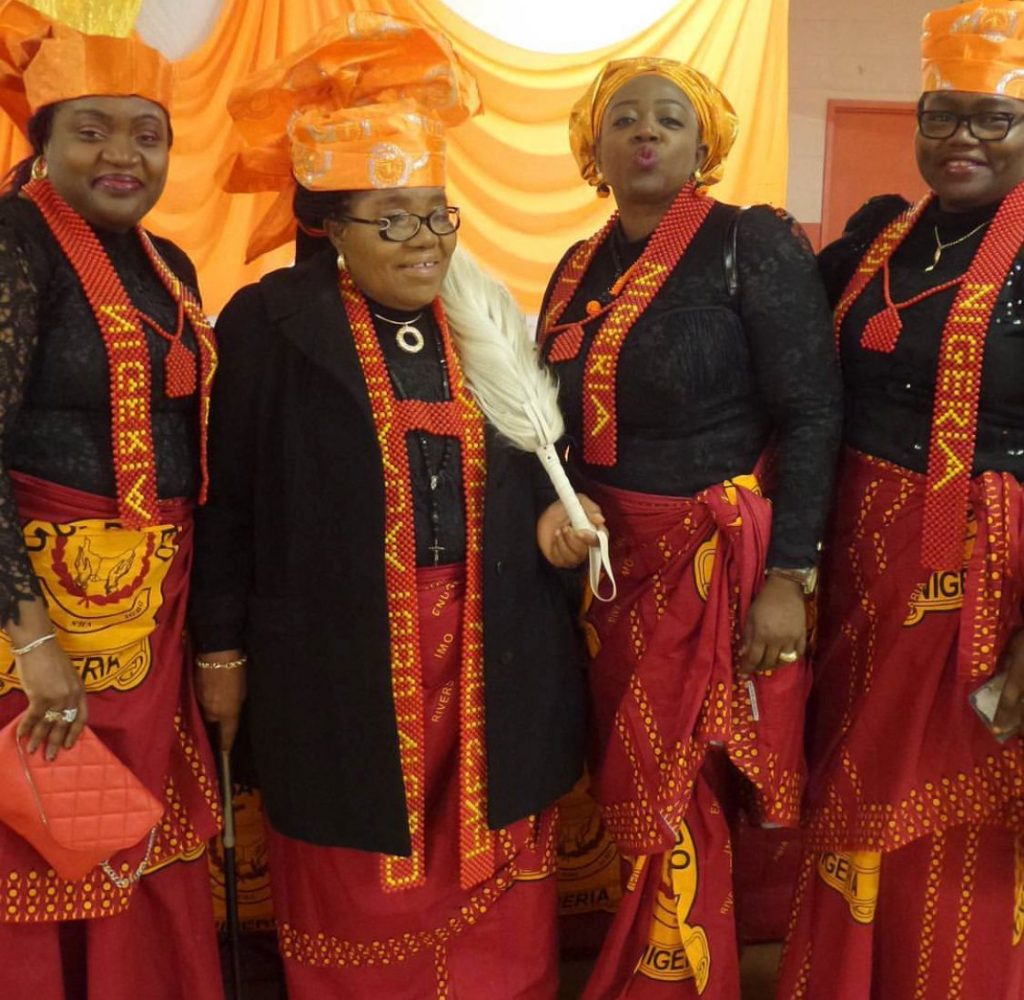 For many, especially the young, the role of the Umuada could not be seen definitively in events held in their immediate families. Their actual relevance was masked by their long list of requests, coolers of rice, and crates of malt.

The Umuada in their activities nudges toward feminism and serves as a platform where the relevance of women is highlighted and appreciated. Long before colonisation in Nigeria, women in traditional Igbo societies were a force to reckon with,  politically and socially. At that time, women had been an undeniably powerful part of Igboland. The Umuada, also known as “Umuokpu” in Anambra state and “Ndimgboto” in Imo state, is a clan of women who are native daughters of the community whether they are old, young, rich, poor, married, single, or divorced.

In the Igbo culture, there are approximately six groups involved in peacekeeping and dispute resolution in the tribe:  the immediate family head who is usually the oldest person in the family, the Umunna, the Umuada, the Otu Ogbo, who are the age grades or peer group; the Dibia who is the community’s herbalist, and the village/town tribunal, usually made up of the council of elders and the Igwe. The listing is in a hierarchy, and involves varying degrees of seriousness, depending on how weighty the case may be. When one of the groups fails to resolve the conflict, the next one steps in.

However, the ability of the Umuada to resolve issues that may have been difficult for their male counterpart, the Umunna, in a society where male superiority is rife, makes these women strong contenders and status changers. The Umuada plays important role in society. They are called to preside on issues like abortion, domestic violence, “husband snatching,” infidelity, and in social events, especially marital rites. When the groom’s family visits for the first time to lay out their intentions in the rites called “Ikuaka” (knocking on the door), a list is provided of all the requirements, and requests made of them. Among this list is a special one from the Umuada group. Intending husbands are advised to meet their needs as a no-vote from them can attract a proposal rejection from the Umunna.

Unfortunately, while the people are appreciative of the roles played by the Umuada in the resolution of disputes and marriages, and their show of unbias emotions, many have witnessed or experienced their display of inhumanity, especially to recent widows. The Umuada caresses as much as it bites. In a Twitter post, Kene_Nnewi highlighted a few of the inhumane traditions faced by widows in typical Igbo society.

SHAVING A WIDOW'S HAIR IN IGBOLAND IS NOT FORM OF MARGINALIZATION AGAINST WOMEN….

See bah Nollywood movies has dealt with our culture…. Shaving a woman's hair when her husband dies is not any form of marginalization against women….what you watch in Nollywood movies is pic.twitter.com/pg1euqWg4d

However, as a radical promoter of Igbo traditions, Nnewi believes and sees these acts as a way to honour their dead husband, hence keeping the tradition alive. With traditions like the scraping of the widow’s hair, making the widow take an oath & drink the water washed off her husband’s corpse to prove her innocence, or locking her up with the corpse for days, it is sometimes difficult to differentiate if this is a punishment for the widow, or an act in honour of her husband. This practice is however being done less in Igboland today.

In Igboland, the Umuada group do not regard their sisters-in-law as equals; rather they refer to them as wives, which signifies the Umuada as the “husband.” To ease the overbearing superiority of the Umuada, the wives married to the community form their group, referred to as “Ndiinyomdi,” which means “husband’s wives.” When this group poses strong, they tend to earn some respect from the Umuada.

By observation, there is a strong tie between the children of Umuada, and their maternal family, for which many assume that the paternal family is spiteful and mean. However, this tie is because of the special treatment given to the children. In Igboland, there is an undefined law of acceptance for the “Umudiala” (children of a citizen). Hence, if the need arises that the children of Umuada need a safe zone, the maternal home is always open to them for as long as they need it. A clear illustration of this is featured in Achebe’s Things Fall Apart, where Okonkwo moves all his wives and children from Umuofia to Mbanta, his maternal home for safety for seven years till his homicide exile was over.

As a result of globalisation, the Umuada has broken into units and expanded all across the world. The group now incorporates state-level bodies and executive heads. The Umuada is certified and registered by the Corporate Affairs Commission, Abuja, under CAMA of 1990, with its headquarters in Enugu State. The group, whose members are spread across Nigeria’s seven Igbo-speaking states of Enugu, Abia, Imo, Ebonyi, Anambra, Delta, and Rivers, is recognised as a non-political, non-governmental cultural group and corporate organisation. The role of the Umuada in the preservation and promotion of peace, equality, and objectivity in Igboland has pinned relevance on women as far as the Igbo culture is concerned. The Umuada will always be remembered and revered for their contribution to building the Igbo culture.

According to Eze Oweni in an interview with The Vanguard, Oweni said, “I remember when we abolished the Osu caste system, the Umuada were there to assist us to achieve it. They must be there. What they do is to speak in affirmation for the abolishment of the Osu caste; this is to fulfil both the physical and spiritual demands that all of us have agreed to abolish the Osu caste practices.”

The Umuada helped shape the Igbo culture after making a major mark in history by leading the 1929 Aba women’s riot, and their active involvement in solving other post-colonial issues. As the police of their time and matriarchs of the Igboland,  they gave a platform, a voice, and relevance to women. The Umuada has fought for equality and continues to support the global and regional struggle for women’s empowerment.