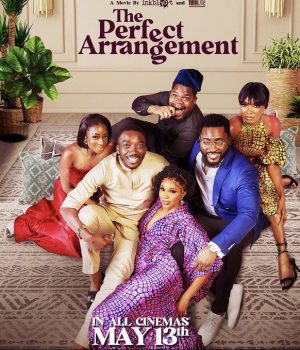 …while the actors played their part to save this movie, bad scripting is a significant contributor to its flop. The script gives a formless and chaotic description of life, romance and friendship…

A glance at the publicity posters, and your expectation rises that the likes of Mr Macaroni, Wofai Fada, and Bovi will have you laughing so hard, your tummy will hurt. However, The Perfect Arrangement manages to do the opposite.

The movie features a love triangle, politics, and an empowered press. It focuses on Tade Kalejaiye (Sharon Ooja) (Kambili, Oloture), who sacrifices her dreams of becoming a fashion designer to become a trophy first lady in order to save her family from ruins. To do this, her only option is to marry her ex-boyfriend, Chidi (Bovi Ugboma) to keep him from a sex tape scandal and put him back as the frontrunner in the Anambra state gubernatorial election. In return, her family’s oil block will be saved, and their fortunes retained. Ironically, Chidi had met Tade through his brother, her best friend, Cheta (Pere Egbi). Chidi and Tade had dated five years before, only to break up because of Chidi’s political ambition. In Tade’s narration at the beginning, she made it clear that she was aware of Cheta’s feelings for her, but ignored it, claiming that she didn’t want to lose her friend.

After her breakup with Chidi, Tade shared a couple of heated kisses with Cheta who, stuck in the best friend zone, kept believing the gentlemanly thing to do was not rush a lady until he lost her for the second time. Now stuck in a love triangle, Tade acts as though certain of her decision to marry Chidi to save their families, but struggles with the conflict of emotions caused by the tiny love sparks and kisses she shared with Cheta. The only person she could talk to and who seemed to understand her is Lottie (Wofai Fada), her other best friend and business partner who, from the story, owes Tade’s family her chance at education. Lottie was the only one aware of Tade’s feelings for the brothers and also the jitters and cold feet she felt towards the whole arrangement. While Tade’s decision holds a good chance of saving both families, a persistent journalist, Abigail (Mimi Cha cha) (The Men’s Club, Halita), stands as a stumbling block to “the perfect arrangement.”

Thirty minutes into the movie, I was sure the only good thing about sitting in the cinema was the ambience in the SilverBird viewing room, accompanied by Tade’s fashion style and the steamy kisses between her and Cheta. Also, we have the hilarious karaoke moment between Chidi and Tade, which immediately cancelled my assumption of Bovi as a romantic, coupled with his kissing, the most cringe-worthy I have ever seen. There was no expression in the act, no connection, no “chemistry” whatsoever. I could picture Mawuli Gavor, Daniel Etim Effiong, or even Ayoola Ayolola doing a better, effortless job in Bovi’s stead.

We had Rotimi Salami who has obviously made a comeback from his killer outfit at the AMVCAs 2022, killing it on screen with his Hausa accent, indirectly stereotyping the Nigerian presidential position. 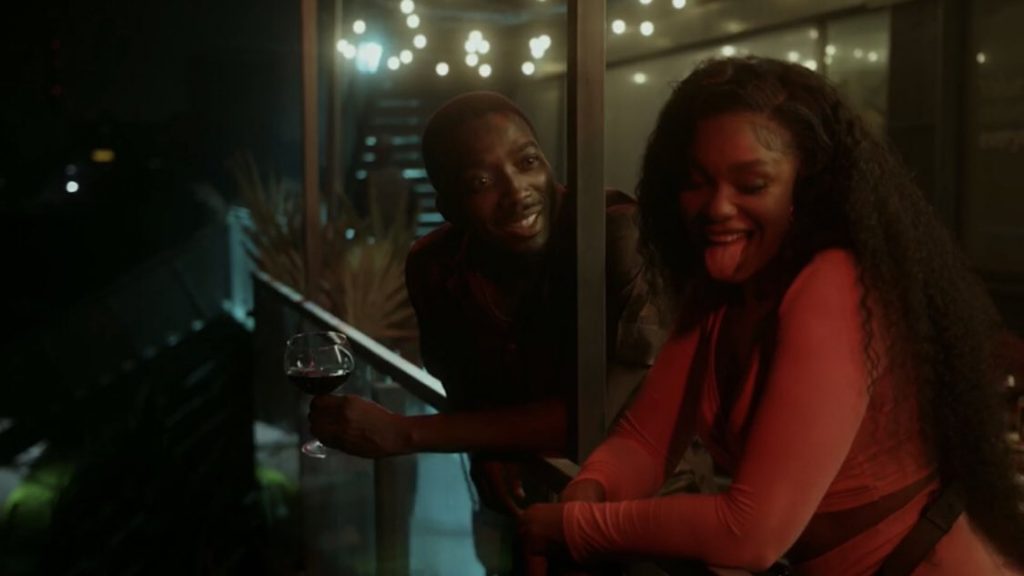 However, while the actors played their part to save this movie, bad scripting is a significant contributor to its flop. The script gives a formless and chaotic description of life, romance and friendship. The movie lacks artistic direction and shows inept acting. It also tries, and was successful, in taking the comedic stars away from their niche. I’m not against exploring the acting capacity of the cast, but Mr Macaroni (Oba Kalejaiye) in the part of a narcissist, whose best line was probably “my friend go and sew some clothes, leave the real work for the grown-ups” is not a complementary fix. The same goes for putting Dorcas Shola Fapson (Tope) (The Man of God, Castle & Castle) who plays the role of a calm wife, an unusual role to see her in. It is, however, commendable how she pulls it off. It seems that the most of the cast fixtures are somewhat more humorous than the actual acting, as the cast made a mockery of their characters with their over the top attempt to be funny. And even though there’s no limit to the theatrical performance of actors, or possible roles they can pull off, the lack of proper structuring and scripting of the movie ruined it all. Unfortunately, the hard work and big budget put into the project couldn’t save the day. Contrary to its title, there is nothing perfect about this arrangement.

Also, there is no focus on the artistic verisimilitude of most scenarios. The Nigerian laws state that the minimum age requirement for a governorship contestant is thirty-five years old. There is however no reference whatsoever to Chidi’s age to show him qualified for the gubernatorial election. Also, how was it possible that Chidi found out about his appointment as commissioner for finance barely a week before the swearing-in? Why does the script steer towards creating a controversial tie between a state, and the presidential seat? Also, merely sitting at a table discussing a country’s political fate doesn’t paint that country well in the eyes of international viewers. Politics in this movie is discussed like a family affair. A lot of questions come up. Crucial details are not taken into note, and so, there is no focus and direction in the story.

Also, most of its scenes show no relevance to the plot. An instance is when both families travel to Abeokuta for the wedding, the visit to the markets in Abeokuta, as well as the tourist sites, was unrealistic for the situation. For a socialite family facing financial breakdown and public interference, these scenes give the idea that their visit to Abeokuta was a vacation of choice.

Again, for a movie of such standard, it seemed to lack extras. For instance, the political wedding of the year lacked enough guests. The simplicity doesn’t speak Nigeria, how much more Yoruba. The Yorubas are attested to be the best party throwers and party goers, but that didn’t seem like the case in this movie. Again, it is understandable the movie is trying to portray a free-press point-of-view, but dropping a line that her grandfather committed suicide, in no way justifies Abigail’s motivation and incessant push to bring down the Kalejaiye.

Asides from the scripting, the cinematography and editing in the movie were upsetting. While I enjoyed the creative view of Abeokuta, the blatant framework and the constant screen news were simply exhausting, probably the worst I have seen since the 2010 Ghanaian movie, The Game. Moreso, there is no scene that marries the subplot to the original story. The dynamics continue to struggle against each other.

While the actors are home possibly recuperating from a stressful production, The Perfect Arrangement is out in the markets selling face and fashion with no talent.