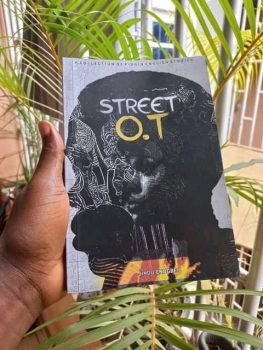 The Orientations of the Street in Jindu Enugbe’s “Street OT”

…Enugbe leads with great finesse, with so much awareness, giving us sweeping and funny narratives, like an old broom that knows the corners…

I once read where a novelist whose name I now forget talked about a book he wrote set in the 11th century, which according to him had a different, unique language. According to the novelist, he did not consciously invent the language to tell the story; rather, in writing the book, the story demanded its own language, one which soothed the long-gone era of the 11th century, and relayed the events peculiar to that point in human history. Now, after reading Street OT, a collection of 21 comic short stories in Pidgin English, written by Jindu Enugbe, I am poised to see in more practical terms, this whole ado about place, time and experiences having their own peculiar language.

Jindu Enugbe’s Street OT is based on experiences of various characters, mostly in the adventurous, rugged and often notorious parts of society regarded as “streets.” As it is often said in the book, “Streets nor clear, you gats open your eye.” A pidgin review of this book is needed because there are certain qualities of the book that will be better discussed in the language with which it is written. The definitive term for streets, as defined by the stories in this book, is not “ghetto” or any of its synonyms, because “streets,” in the true sense of the word, and in the world where this book was conceived and written, exists as an idea than as a location. It is not a particular place; it is a group of places that exist in isolation in different parts of society where survival of the fittest is the order of the day. The street exists in the residential areas, in the universities, even in the church. The street is a culture, and those who are part of the streets, like custodians of every other culture, carry the streets with them wherever they go. Hence, Enugbe, a poet and graduate of Law from Delta State University, a product of the streets, has written a collection that tells the story of the streets in the very language of that society.

Of the 21 pieces in Enugbe’s Streets OT, there are stories of students trying to get a hang of the adventure of university life; of cultists running from whatever problems they have put themselves, or whoever is after them, or, trying to navigate the general chaos of being in a confraternity; of “Yahoo boys” who have been “run the street way” by their counterparts, trying to make sure the person who cheated them is brought to book “the streets way”; of friendships, betrayals, business, happiness and grief shared in all of this dispensation. In general, this collection is Enugbe holding the reader by the hand, taking them round the streets, and telling them, “O bobs, streets nor clear. I done dey here before. And my guy, I nor go lie you, I dor see tins. See how e dey be. See how e dey be. Streets nor clear, you gats open your eyes.” And Enugbe leads with great finesse, with so much awareness, giving us sweeping and funny narratives, like an old broom that knows the corners.

Looking at the literary culture in Nigeria, one wonders who tells the story of the people in the streets. One of the biggest quarrels that have arisen from the stories of poor people being told in Nigeria is that many of these stories are poverty porns and the stories they tell focus solely on the poverty of its characters and sidelines their humanity. Many people are yet to understand this argument and what it entails. Does criticising poverty porn mean that it is bad to write in majority about poor people and people on the streets (especially when Africans are majorly “poor” and on the streets)? Of course not! The problem is seeing people only from the vantage of their poverty or notoriety, something good literature should not do, since good literature shows readers what is not immediately evident. This argument lends credence to the craft of Enugbe who has written a collection of stories that, without trying to, shines the torch on the people on the streets from an adventurous and often human point of view. Their very lives are defined by danger, adventure, in some cases crime— but, here, their stories are being given the attention it deserves. 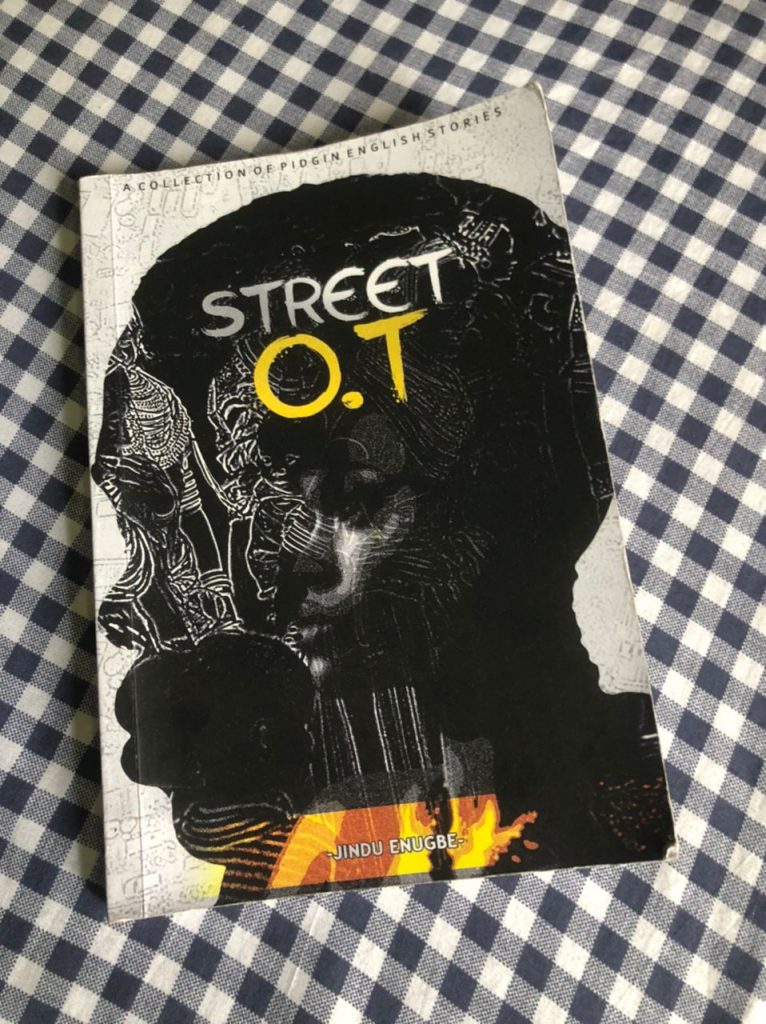 In the story, some pretty outrageous things happen, and are perpetrated, often by the narrators in the story, but they are told from a different perspective, that the reader isn’t seeing it from the eyes of the law, but from the eyes of the streets. In the eleventh story, “Streets Nor Friendly,” a man narrates how he did business with his friend, Rona, who tries to cheat him. After many backs and forths, the protagonist sends some of his friends to shoot Rona on the leg as a warning. Rona, seeing the gravity of the situation afterwards, returns the money even while nursing his wounds. The way the story pans out and its conclusion makes it one of the most instructive stories in the collection. It is a part of the stories including the title story, “Street OT” which defines the collection as a book talking about street orientation. These stories deal with the harsh reality of the streets, and their major message is, “O bobs, street nor friendly, even your main man fit loose-guard you. Try open eye, if not, your own go loss. And if anybody take your own, give am fire wey pass him own.” There are also other stories that intersect through the larger society, like the fifth story, “100 Years,” where a boy narrates how his friend, against his advice, goes on to have an affair with another man’s wife, and gets into trouble for it; or the second story, “Blood Covenant,” which narrates the story of some children caught in a hysteria over the notion that two of their peers had taken a blood covenant and broken it and calamity was looming in the aftermath. One is particularly touched by “Fuck up Nor Dey Sour for Street” where a man narrates how his friend got into trouble when he could not deliver a business in full, and got killed, only for his killer to be gunned down six years after; and also, the eighteenth story, “Love” which narrates the heartbreaking story of a man who gave up on love after a horrible experience.

How would this story read if written in English? Perhaps, good. But written in Nigerian pidgin, it is even better because this is the language which the story demands to be told as authentically as it can be told. “Streets Nor be Bobo Juice,” “Bros, Chicken nor dey cry for night. If e cry for night, we go kill am chop.” Surely, there are equivalents for these expressions in English. But it is difficult to match the sensation of reading them in pidgin.

Street OT is not just written in pidgin English, but the kind of spoken in Delta State/Warri, Nigeria, a place imbued in humour and surrounded by the street culture. Naturally, most of the stories here are funny. Street OT is a good recommendation for anyone who is interested in seeing how the pidgin English can work in narratives, and even for writers seeking a new perspective on how to use the language.

The stories in the book are unapologetic which makes it brave, but it is also a fault since the stories of the characters in the book could have done with a bit of nuance. They could have done with one or two moral bearings, and shone light on some of the situations which lead people to living notorious lives. Street OT also had the potential to engage the reader in a sort of critical discourse on society, but it does not. This subtracts from the thoughtfulness of the book. The editing could have also been better, and the book could have fared better with a better proofreader, owing to some errors in punctuation around the work. These could be corrected in a second edition.

From the first story which is told in pidgin proverb, typical of poetry written in the language, down to the final two stories which are a street adaptation of the story of Biblical Abraham and the betrayal of Christ, Enugbe shows his ability to tell stories from the streets as a witness, and also to see stories from another culture and epoch through the vantage a boy immersed in the Delta State streets culture. Street OT is a great and courageous feat by any standard in a literary culture that is no longer very lenient to rebellious artists.