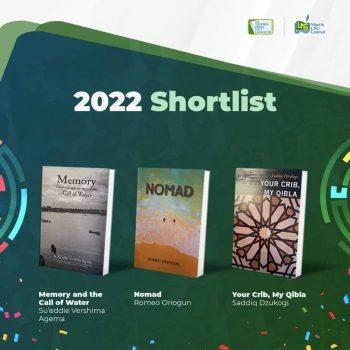 The NLNG-sponsored Nigeria Prize for Literature has announced the shortlist for its 2022 edition which pays homage to poetry. The announcement was made on the Twitter page of the prize organisers Friday last week.

The poets on this year’s shortlist are Romeo Oriogun (Nomads), Saddiq Dzukogi (Your Crib, My Qibla), and Su’eddie Vershima Agema (Memory and the Call of Waters).

The judges noted that Agema’s book employs “a consistent use of memory to reflect on life and destiny through the metaphor of water.” While they noted that Oriogun’s work “has a fresh language and a nostalgic engagement with the themes of exile and displacement,” Dzukogi’s book “translates tragedy into lyrical poetry with pathos and effortless imagery.”

The Nigeria Prize for Literature is an annual prize that celebrates the best work from a single genre in an award year. The prize which awards its winner with $100,000 and rotates across prose, drama, poetry, and children’s literature is considered the richest and most prestigious literary prize in the world.

The award was given in 2021 to Nigerian-Canadian author, Cheluchi Onyemelukwe for her novel, The Son of the House.

The winner of the 2022 prize will be announced in October.