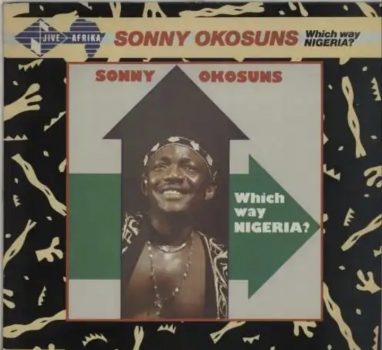 Nigeria, Two days ago celebrated its 62nd year of independence from Great Britain. The country has undergone various challenges and triumphs, from the thirty months of civil war to the numerous military coups, and the current twenty years of uninterrupted democratic government. Just like every nation, Nigeria has grappled with problems, and music artistes have always released tracks to call the government to act. These artistes have been known to correct, criticise and praise the government when necessary.

This list offers ten songs that speak about the state of the nation. It’s a crossbreed between old and new music. Let us know your favourite in the comment section.

“Pete Pete” by 9ice and Asa

Off his Tradition album, 9ice called on music legend, Asa, for a social-driven song. As at  2009, both artistes were already dominant figures in the music industry. The topic of the song was unexpected but germane. Over a mellow guitar and drum roll, Asa and 9ice sings about the state of the nation, urging the citizens, youths especially, to rise to the occasion. The song starts with a reflection of what it was like in 1960 when Nigeria gained independence from Great Britain, before shifting to the present state of the economy. Asa asks a lot of questions about the past and present administrations in Nigeria.

(Read also: 9ice Shows Traits of His Almost-forgotten Brilliance on “Tip of the Iceberg II”)

In 2004, controversial Nigerian rapper and singer, Eedris Abdulkreem, was close to becoming a villain in the music industry. His song, “Jaja Jaga,” was so big that it got a response from the then president Olusegun Obasanjo. On this song, Eedris went raw and real about the plight of the masses. It’s a stark representation of what the common man faces in Nigeria. It sheds light on armed robbery, bribery, and corruption. One alluring feature of “Jaga Jaga” is the directness with which Abdulkareem delivered his message.

“Another Story” by Burna Boy and M.anifest

Just like most African countries, Nigeria and Ghana suffer from similar maladies of maladministration and corruption. Grammy Award winner, Burna Boy, and Ghanaian prolific producer, M.anifest, united to create a song that touched on a shared topic between Nigeria and Ghana. The song which was one of the album fillers on the African Giant album begins with an audio cut about the history of Nigeria, and how the country came to be. It is a history lesson for anyone who ever listens to it.

9ice has always been an advocate of the people, right from when he started till now. On this song, released in 2007, both artistes sing about the economy, and police brutality. They end most of the lines with the refrain, “Make Dem Talk.” 2Shotz’ two verses centre on his Lagos experiences, his constant battle with louts, and the police.  9ice’s last verse is a call to action, a plea to the citizens to be proactive in the face of lingering problems. This song might be old, but the message remains timely.

Wande Coal took listeners through a short history class on “Se Na Like This.” It’s a nod to the beautiful past Nigeria has had, and a clamour for change. In this song, Wande Coal sings about the past when one got a job immediately after one graduated, when Nigerians flew to London without visas, and when one Naira was equivalent to one Dollar. “Se Na Like This” was, perhaps, the last time Wande Coal stood as the people’s mouthpiece in his music.  Fortunately, the song  still reverberates.

Even the Egberi Papa 1 of Bayelsa was not left out of the clamour for change in Nigeria. Two years into the administration of the All Progressives Congress (APC) in the country, Timaya reminds the party of what they promised. “Dem tell us dem go bring us change, he says. He later switches to singing about his commitment to Nigeria. “I love Naija, I invest in Naija.” Timaya shows his vulnerable side in this dancehall-engraved song. It shows he can relate to what the average Nigerian experiences.

“OGIB (Our Government I Beg)” by Oritse Femi

Oritse Femi, “The Musical Taliban,” lists out on “OGIB“ what the citizens want: water, power, food, and housing. Not done, he talks about the way Nigerians try to travel to Europe through the desert, with a particular bias toward Libya. Oritse Femi tabulates the problems of these countries: hunger, low mortality, and illegal migration. Perhaps, this is one of the few songs that succinctly states the problems of the country.

(Read also: Five Nigerian Artistes on the Cusp of Stardom)

Long before he became known as the tipsy man on stage, Klint Da Drunk laid the hook for one of the best modern songs to come out from South East Nigeria. With verses from Mr. Raw formerly known as Nigga Raw, “Obodo” details the ugly situations citizens face in their daily journey in the country. Mr. Raw raps from a personal point of view, with his experience with a member of the Nigerian police force while he was on his way from the market forming a large chunk of the song. Whatever Mr. Raw says on this song still stands, and is even more pronounced right now.

“This is Nigeria” by Falz

A cover of Childish Gambino’s “This is America,” Falz details the problems of Nigeria in this song, with its largely controversial video doing more justice to it.  The video was received with heavy backlash, but the message was not lost, even on its critics. In between audio cuts from Falz’s father, Mr. Femi Falana, and others, Falz penned his name in the history book with this song. He stepped it up by releasing the Moral Instruction album eight months later.

“Which Way Nigeria?” by Sonny Okosun

Close to forty years ago, the maverick singer, instrumentalist, and evangelist, Sonny Okosun asked this innocent question. It’s glaring, even now, that no one has an answer for it. The inflation, corruption, and mismanagement of the oil fund he mentioned in that song have skyrocketed.  Not even Nigerians can pinpoint which ways the country is heading.

At the end of a listen of these ten songs and many others that have been produced in the past decades, it is noticeable that Nigerian artistes have always been at the forefront of social change. Through their music and activism, a lot of difference has been made in the state of the nation, and in the mind of its people.