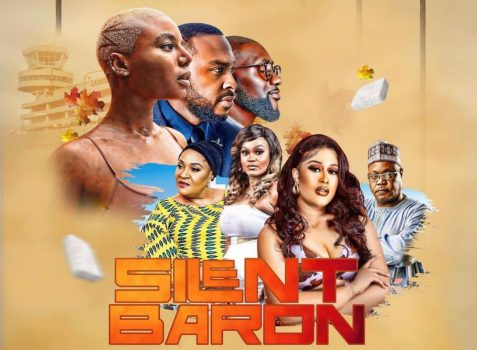 The cases of drug abuse and drug trafficking are not news to the Nigerian National Drug Law Enforcement Agency (NDLEA). In most cases, young and old citizens have been taken into custody for possession of illicit drugs. They are apprehended at the airport or by sea trying to smuggle them into the country.

Working in conjunction with the NDLEA, this production from Ekwe Nche Entertainment sends its message in plain form to viewers. Showing government support, the movie premiere was graced by the serving Vice President of Nigeria, Prof. Yemi Osibanjo; NDLEA’s Executive Chairman, Brigadier Gen. Buba Marwa (retd); the Director-General of the National Council for Arts and Culture (NCAC), Otunba Olusegun Runsewe, and other top government functionaries.

A Richards Omos-Iboyi film, written and produced by Ifeanyi Macmillan Ukaeru, Silent Baron follows a young man, Anslem (Enyinna Nwigwe), who tricks his way into the lives of naïve young ladies, and, with a promise of marriage, uses them to traffic drugs. At the same time, the NDLEA is faced with incessant cases of drug trafficking, hence a syndicate is formed. Frank (Anthony Monjaro) is appointed to head the syndicate, which in turn puts him in danger. He’s quickly attacked and shot by unknown gunmen. On the other hand, naïve and innocent Anita (Nancy Isime) is swayed by Anslem’s looks and loving gestures, although the movie fails to detail this plot. The time skip leaves the audience lagging and uncertain of the exact story the movie is portraying.

For a movie shot in 2022, the picture quality is below average, but not as terrible as the fake bun on Isime’s head or the acting by the NDLEA officers. One would wonder how Frank, shot at the back, has a bandage on his arm. The movie is built on the need to portray drug trafficking mechanisms, and the life-changing implications of being caught. It, however, overdoes it with the flashbacks and Frank’s arrogant reminiscence of his good old days.

Nwigwe interprets his role perfectly as he portrays his character’s pattern of operation. However, the improbability in the film is uncanny, and this improbability runs through the thread of the movie. For instance, would an average Nigerian father act the same way Jibola Dabo did? Would a drug lord act the way Ejike Asiegbu did? The movie had the best cast to deliver a powerful, Oscar-worthy performance, but the case was the reverse.

The movie is well-written if we decide to overlook the repetition of lines and predictability. In her usual style of delivering roles, Isime brought light to her character, from naïve to desperate for revenge. The story, however, doesn’t give room for character development and plot fulfillment. The film has a good storyline that indicates its potential to be big, but seems rushed.

Besides the unclear plot, Silent Baron successfully alters the “African stepmother” mentality. Anita’s stepmother, played by Adunni Ade, changes the Nollywood portrayal of stepmothers as wicked and vicious. Ade is loving, accommodating, and has a more intellectual attitude towards events surrounding Anita and Anslem’s relationship. However, in the case of her prediction coming true, she doesn’t go around waving her flags.

Also acknowledged for her constant Stellar performance is Ngozi Nwosu, who, even in her short appearance managed to, as always, bring a smile to my lips. In general, the cast was impressive, but with the movie looking like most of it was scraped out during post-production editing, we probably have the director and producer to blame. Furthermore, the movie sells more as a display of failed trust than the consequences of drug trafficking. If placed alongside Nimbe (2019), which gradually develops its characters while carrying the viewers along, Silent Baron will almost certainly fall off of the charts.

Typical of films with sensitive plots, Silent Baron uses Frank to explain at every opportunity, as if it wasn’t sure its message was being conveyed sufficiently through actions — (and it did, a little too much, to be honest). Like a scripted replay of its synopsis, the movie has no suspense or a point of climax. It is obvious how the movie will turn out, and the viewer is exhausted from the beginning, but is forced to continue watching, if only to get their money’s worth. Silent Baron would have done better if it developed its characters and avoided time-skipping, which, although necessary to relate the story, loses the viewers in the process. The reuse of airport extras was obvious, too, and no one seemed to think we would notice.

Regardless of these, Silent Baron relates an important message of failed trust and opens the eyes of ignorant parents and gullible children to what is happening around them. It also points out, ironically, that being an ex-convict isn’t so terrible, as most times press records and mugshots are barely taken in Nigeria, unlike in the United States. In this way, the movie receives a pass-on effort, and is a good watch if you shut your eyes to all its flaws, and focus on your favourite A-list actors, who did good enough jobs.

Finally, Ukaeru’s relative unpopularity in the industry may save him from this bashing from viewers, and the poor performance of his work may be excused as lack of experience. Hopefully, his next work will be better. The movie, even though it carries a strong message, is very forgettable due to poor structuring. It makes it difficult for the viewers to be interested enough in grasping the message.

The title is also a bit too heavy for the minute performance the movie makes, although you can only understand this by seeing the movie.