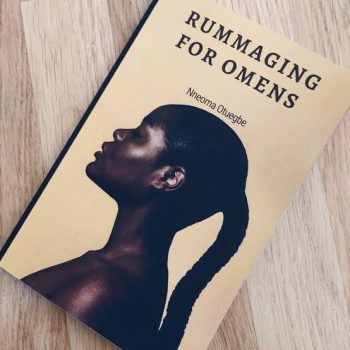 “Rummaging for Omens”: A Review of Nneoma Otuegbe’s book of poetry

Rummaging for Omens is a book of poetry as much as it is a book on poetry. It presents to the readers different forms of poetry in a way that is anything but chaotic…

Death to us is not a gentle visitor, and for that, Dylan Thomas had urged us, “Do Not Go Gentle into That Good Night.” Nneoma, in like manner, asks of her father’s death, ‘why did owls/ not deaden the night with howls/as rivers run over banks in sleepy towns/when your time arrived?’

There is no better way to approach the year’s end than with a good book of poetry. Such a book makes the holidays jolly days. It is with this understanding that Nneoma Otuegbe, through Baron’s Café, gifted us with this poetry collection, Rummaging for Omens, a month to the end of 2021.

How does one speak of loss without hopelessness? Or of grief without gloom? What is in a longing that can bring smiles to the face, or in lamentations with melodious tunes? Where does a poet get such a craft? Maybe from Nneochie the river goddess, whose sweetness perfects craft? If that is the case, then Nneoma is a true daughter of Nneochie.

In Rummaging for Omens, she takes her readers through loss, longings and lamentations. She voices her condemnation of societal evils in a voice strong enough to pass the message, yet subtle enough to maintain the artistry and not turn the poems into activistic chants.

From the first poem in the collection, which doubles as the book title, the reader is introduced into the world of women, a world that has always been, a world that we rarely see on the pages of poetry books in Nigeria. Richly feminine and feministic, the poems exude motherly love and daughterly attachments.

Inspired by the loss of a father, the poems, like a beautiful flower, unveils its petals in a slow, steady and easy-flowing manner. The reader is introduced from the first poem to the flippant and random manner with which the Universe operates for ‘only yesterday I had a father/ as sturdy as a rock/ a little unforgiving but rather/ one of life’s reasons not to mock.’

Rummaging for Omens is a book of poetry as much as it is a book on poetry. It presents to the readers different forms of poetry in a way that is anything but chaotic. So, in “Down,” we see the use of shape-shifting in enriching written poetry, and in “Fatted Cows,” we see how unequal use of lines in a stanza helps in passing a particular message in a particular poem.

The poems are set in two different countries: one houses the University of Wolverhampton where the author studies for a PhD in English Language and Literature, and the other, ‘a paradise of darkness/ a sooty cave with charred remains/ of dreams deferred once and then erased.’ These are the words with which the poet described her country, Nigeria, a paradise ‘choking under the burden of ineptitude/ and damning contentment.’

Motherhood is presented in its full form in the book. The reader cannot wait till the end of the book before reaching a heart of appreciation to their mother for birthing them. Visibly inspired by the birth of her son, Nneoma presents the transition of a woman from being only a woman to becoming both a woman and a mother. ‘True, some days I cringe at the sight of certain parts of me/ parts which now sullen/ point towards the earth/ like tired papayas sucked half-dry by marauding birds.’

By choosing to highlight this aspect of fallen breasts as a result of breastfeeding kids, Nneoma shows that motherhood is a permanent event that alters the mother’s being. This is why the loss of a child is also the loss of a mother. Even when a mother gets over the loss of her child, ‘bereaved mothers never forget/ the days that might have been.’

In a recent post on her Facebook wall, the poet wrote, ‘2021 has dealt with my heart.’ This statement is true for everyone, although at varying degrees. One cannot speak of 2021 without talking of 2020, the year COVID-19 put us all on “house arrest.” ‘Outside, the winter sun smiles in waste/ its beguiling embrace shunned/ by the masked ones who choose without a second/ the refuge of home.’

The poet never lost sight of the many problems facing her home country even while being in faraway Wolverhampton. She refers to the country’s elections as ‘Recycled Darkness’ where the ‘people reel under the humbling burden of recycled old men/ we scoop them up in those lethargic games/ where choices are inconsequential.’ The country’s leaders are ‘like NEPA, inept in her numerous christenings.’ In these poems, the reader is drawn into deep musings. This simile, for example, is not just about NEPA and her christenings, but also about the different political parties in the country, which while bearing different names, are the same in ineptness, likewise all the institutions of the state, not minding their nomenclature.

The reader is reminded of the menace of the Fulani herdsman who ‘with axes and machetes working tirelessly/ tirelessly/ deeply/ in the name of God and beef/ push push/ with gifts of beef and desolation.’ They kill people and sell funeral cows to the victims’ families.

Classism is alive in Nigeria as it is in the whole world, but there is something about ‘our children have shiny bellies/ theirs are flat, hugging teddies/ from lands we only dream about’ that makes Nigeria’s version more aggressive. For all these problems, the poet asks of the celebration of Nigeria’s independence, ‘How can we be shameless in our age? /when at fifty you are not aware of/ what you want to be when you grow?’

Throughout the book, the reader is also faced with the yearnings for a love lost. ‘Raise me as you always do, effortlessly/ make distance hide her face in shame/ make my heart jump to the music of hope/ of love that will never expire,’ and when faced with the hopelessness of these yearnings, the poet concedes, hopefully, ‘you are not mine, I know/ but I am yours.’

But the book is not only about loss and lamentations. There is also gratitude for things broken that have been fixed. “The Talking Drum” ‘says that twins are never to be cast off anymore/Oh! To watch my children’s growth/at home, not the forest of evils.’

The poems urge us as Africans to return to our roots. Like Christopher Okigbo said to the river goddess Idoto, the poet says to the river goddess Nneochie ‘back here before Nneochie/ earth mother, mother of many rivers/ my soul stands naked from the waist down/ an errant daughter I come/ summoned by a formidable past/ even though I love the leper’s god/ I always bear you in heart/ for your sweetness perfects my craft.’

It is for this reason she berates girls with ‘skin the colour of the setting sun’ who are ‘striving to become another/ now your flesh is gone/ because you strive to be like the women of cold.’ She asks of the black girls who bleach their skins, ‘where is your ancient blackness?/ your veil against the dirt of the world.’

Rummaging for Omens shows that every human experience is both local and global. The true Nigerianness of the poet cannot be missed, especially in the poem, “Monsters-in-Chief” which ended with the Igbo proverb ‘makana ihe ewetere n’agiga ite na-ala n’agiga onu,’ and also in “Last Night” where Nigerian pidgin is placed side by side with impeccable English. This shows the linguistic reality of Nigerians, but one doesn’t need to be a Nigerian to appreciate its beauty and richness.

The poet has a clear direction of where she wants to be, and she successfully arrives there. Plagued with loss, contemporary Nigerian poets tend to engage in what some have described as ‘grief trafficking’— writing poems that sink the soul. Nneoma took an innovative approach to the same problem and provided us with poems that uplift rather than sadden. She says to her readers, ‘the war ended together/ gather in the square/ and let us pull down this mountain of garri/ and swim in mother’s uha soup.’

Musicality is never lost in any of the poems. With intelligent rhymes and superb rhythms, the reader is met with poems melodious to the ears when read aloud; poems which if fail to get to the head, always speaks to and gladdens the heart. In “Down,” especially, the poet used repetition to gift us a song.

Foods, vegetables and fruits featured prominently in the poems, for reasons that escape my comprehension. There is no shortage of figurative languages throughout the book. The use of contrasts in the poem was also glaring, following the Igbo idea of “ihe kwụrụ, ihe ọzọ akwụdebeya,” the idea of the Ying-Yang balance.

The poems are arranged in such a way that there is a sweet progression of thoughts, well punctuated with humour, bringing joy even to a deeply troubled mind. Written in free-verse, the reader is invited to join the poet in an exploratory journey that promises happiness and fulfillment and enjoyment.

My ideological conflict with some of the poems is in the deployment of some words in explaining the shocks of being away from home as well as the daunting powerlessness of knowing that there is nothing positive urging one’s return to home. The poet uses the word ‘leper’ to show difference in skin colour while lamenting that home is ‘an abyss even my enemies should escape. There are better words to be deployed while describing differences in skin colour without involving a disease.

In the poem “Alone” also, one is faced with ‘this child is your seed, yet you stand here to see/ as it tears up my insides/ alone.’ Here the poet is accusing men (in this case, husbands) by the mere act of not being biologically able to carry pregnancy, of not taking part in the pains and apprehensions that come with pregnancy. That, of course is wrong.

First off, the child is not just the man’s seed, but the man’s with the woman’s. Secondly, as my people will say, the woman carries the child in her uterus, the man, in his head. That is to say, the man and the woman alike are in the process together.

The book’s strength lies in its artistry and choice of words. The reader is called to enjoy the happiness that comes with discovering new words, checking their meanings and watching more petals of the poem unfold as a result of that. The reader is allowed to enjoy art for art’s sake and art for activism, simultaneously.

Ugochukwu Anadị is an avid reader with a little touch of Agwụ.