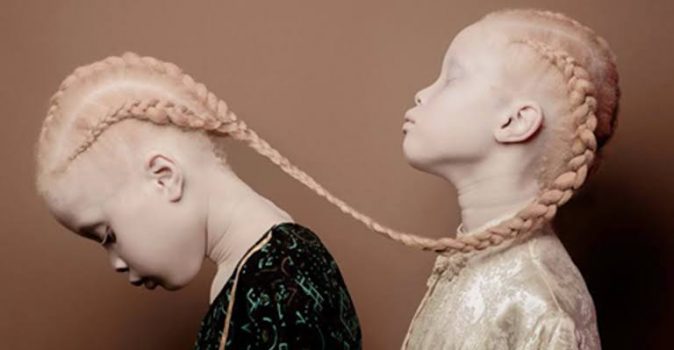 Demystifying Albino Myths and Misconceptions in the Mass Media

Etymologically, the word “albino” comes from the Latin word “albus,” meaning “white.” It is a genetic condition resulting in the absence of melanin in the eyes, skin, and hair.

Albinos are everywhere in the world but are predominantly found in sub-Saharan Africa. People with albinism may have sight problems, pale skin, white or yellow hair, brown, violet or blue eyes. It has been proven that albinism arises from “mutations in genes encoding for proteins involved in the synthesis or transport of melanin by melanocytes.”

Unfortunately, the foregoing conception of albinism differs in different parts of the world, especially in Sub-Saharan Africa, where albinism is misconstrued and constructed into a monolithic other. Throughout Africa, albinism is heavily associated with superstition, witchcraft, and evil, stemming from the primordial myths and misconceptions now propagated by the media through memes and movie characters.

In sub-Saharan Africa, albinism has various linguistic interpretations that have deepened the prejudices and socio-cultural exclusion of endangered people. In Zimbabwe, albinos are called “sope,” which implies that evil spirits live in them; in Tanzania, they are also mocked, stereotyped, and called “nguruwe,” which means pig, “zeru,” which connotes ghost, or “mzungu,” which means “white person.” While other countries might or might not have other dehumanising nomenclature for albinos, they have portrayed albinism as a trope for abject fear and evil.

These Albino myths and misconceptions are horrifying despite this age of information where logic and science should have buried the age-long ignorance. For example, growing up in Malawi, Burundi, Nigeria, and Tanzania, we were erroneously told that the mothers of people with albinism were impregnated by white colonialists or ghosts. In sub-Saharan Africa, ghosts are largely believed to be white. That is why in movies, when people die and reappear to the living, they wear as white. This superstition is still sustained in contemporary media.

Albinos are also believed to wield supernatural powers; that their body parts, if used for money-making rituals, would bring unimaginable wealth, good luck or fortune. Some native doctors require the body parts of albinos to perform certain rituals. Albinos are daily hunted by ritualists till today. For example, up to $70,000 is likely to be offered for a set of arms, legs, ears, and genitals from an albino.

Amnesty International reported that a 2-year-old Whitney was abducted, and her skull, teeth, and clothes were found in a neighbouring village. Another 9-year-old boy, Harry, was kidnapped and beheaded with some missing body parts. Whitney and Harry were albinos from Malawi, and being albino was their sole crime.

Statistics have shown that over 170 albinos have been killed since 2014, with others displaced, missing, and graves unearthed in Malawi. In Tanzania, Nigeria, Burundi, and other sub-Saharan African countries, albinos have been murdered or dehumanised most crudely.

It is said in fairytales that, after giving birth, Satan stole the original child and replaced it with an albino. That albinos and their mothers are thus seen as possessed by evil spirits. The untruths are also spread that albinism is extremely contagious and could be spread through touching. However, I have been touching albinos all my life, and I am yet to be one.

People living with albinism have faced brutal attacks, and recently reported atrocities, such as kidnapping, amputations, infanticide and decapitation have received condemnation all over the world. But the fire of social exclusion, segregation among fellow black-skinned kinsmen, and denial of basic rights burns still.

Social media has not helped to demystify these misconceptions and myths but has rather propagated pop culture’s authorisation. Vivian Atinuke Adenijo who contested for the Most Beautiful Girl Pageantry in Nigeria in 2021 was indirectly ridiculed by her country people who asked how an albino could contest for the most beautiful in Nigeria. They asked how an albino was supposed to represent the country on the global stage.

From these, one begins to understand how deep these misconceptions and segregation have eaten deep into the consciousness of people. You begin to wonder if albinos are not human beings who deserve to be treated equally.

We owe the duty to demystify these misconceptions and myths that have been propagated and sustained in the mass media against albinos. While we are quick to announce that “Black Lives Matter,” we mustn’t hesitate to also push that “Albino Lives Matter.”