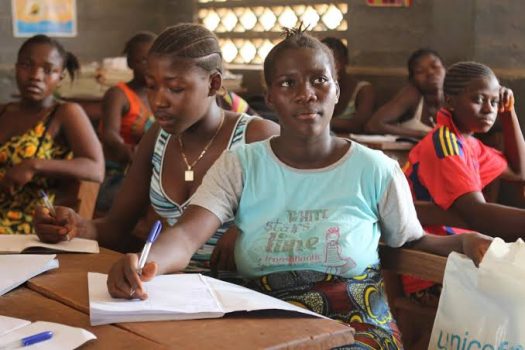 Is There a Better Way to Address Teenage Pregnancy in Africa?

Contrary to the belief that sex education encourages promiscuity in young people, better sex education can help delay their engaging in sexual activities at an early age and prevent teenage pregnancy…

In November 2021, the Tanzanian government put an end to the law that authorised the expulsion from school of young girls if they got pregnant during the course of their primary or secondary education. This law, called the Tanzania’s Education Act, which permitted the exclusion of female students from school when they “committed an offence against morality” also prevented these adolescent girls from returning to school after childbirth. This law perpetuated the ideology that sex outside of marriage is sinful and shameful. It is a view shared by traditional and religious authority heads.

The previous administration vehemently enforced this policy in 2017, with the former president, John Magufuli championing the law, stating that the administration would never educate mothers who returned to school, even if they were married. This thought was challenged by many Girls’ Right groups, who argued that educating girls was a right, rather than a privilege.

The administration enforced a rather invasive and mandatory pregnancy testing, especially during qualifying examinations periods, both at lower level and higher-level secondary education, and prohibited these girls from returning to school, leaving them without any alternatives for learning. These girls were heavily discriminated against, and sometimes even arrested.

Although in 2020, the Tanzanian government allowed these young mothers to take advantage of parallel learning programmes, it presented the same challenges to these young school girls around the country, which includes the financial strain to the cost of education, and sometimes having to walk long distances to the learning centers.
By putting an end to this law, Tanzania joined the throng of African countries reforming hostile laws towards teenage pregnancy.

Similarly, in 2020, Sierra Leonne lifted a ban which had hitherto excluded pregnant school girls from school. The ban was put in place in 2015, following the reopening of schools after the Ebola outbreak in the country. A large number of school girls resumed to school pregnant, and to that effect, were prevented from continuing their education. Like Tanzania, Sierra Leonne set up these parallel learning centers which were heavily criticised by activists and viewed as a form of discrimination against these young school girls.

These liberal steps are a breakthrough for the mostly conservative African landscape. However, these steps only address measures after pregnancy and childbirth have occurred, rather than profer preventive measures against pregnancy in the first place. Sadly, young women are still facing various forms of stigmatisation. In East African countries like Uganda  and Rwanda, young school girls who conceive outside of marriage are stereotyped as immoral and “loose.”

Adolescent school girls who get pregnant outside nuptial unions are chased away from their families for the shame and disgrace they bring, and in most cases, may have to discontinue their education.

It is apparent that this discrimination against pregnant teens has not reduced the prevalence of unwanted pregnancy, neither has punishment towards them. To better tackle the subject of teenage pregnancy is to understand why and how these young girls become pregnant.

The World Health Organization recorded in January 2020, that at least 10 million unwanted pregnancies come about in adolescent girls between the ages of 15 to 19, and that over 700,000 girls below 15 have babies in developing regions.

Teenagers are also twice as likely to develop complications during pregnancy and childbirth. There have been reports that 26% of maternal deaths occur among young girls. The demographics of adolescents and young adults living with HIV worldwide is at about 1.8 million people, with the most recorded cases from Western and Central Africa, with South Africa following by a large margin.

Due to fear to stigmatisation, young girls may resort to abortion when they get pregnant. Yet, in some countries in Africa, abortion has been deemed a crime. In other parts of Sub-Saharan Africa, abortion is moderately restricted and permissible only when it causes health concerns, or as a result of abuse.

Restrictions like these have resulted in women getting abortions illegally and, in most cases, under unsafe conditions.

Studies show  that 98% of abortions carried out in developing countries are unsafe, and 41% of these abortions are carried out by young women between 15 and 25 years of age.

A salient cause of unwanted pregnancy is poverty, as reports have shown that low-income and middle-income earning countries have higher rates of unplanned pregnancy, especially among teenagers. School girls in Tanzania, like in many parts of Africa, are at risk of being exploited to ameliorate their livelihood by engaging in sexual relationships in exchange for money. Sometimes, encouraged by family members, school girls lacking better alternatives, follow men able to cover the cost of their education; tuition, books, etc. In some societies, young girls are married off as child brides to much older and/or richer men.

Outside the classroom, girls seek out boyfriends and lovers that can afford to pay for their needs. Male teachers and learning instructors also take advantage of these young girls by demanding for sex in return for good grades. It is alarming that male teachers solicit for sex from secondary school girls, majority of which are minors, in exchange of good grades. These, among many others like sexual abuse and rape, are leading causes of pregnancy in young girls between 13 and 19.

Despite these challenges, talks about sex and sexual relations are poorly handled and largely avoided in many African societies. This is primarily due to religious and moral views as regard sexual activities among young people, and the tangential belief that talking about sex to teenagers encourages their promiscuity.

It is necessary to have a comprehensive discourse about sex education as it is paramount for young children and adolescents to have clear, rather than disparaging view towards sex. Sex needs to be demystified since conversations on it are blurred, distorted and laced with so many innuendoes. Parents who feel ashamed or uncomfortable having these conversations with their children most times assign the roles to other relatives.

A comprehensive sex education differs from “abstinence-only” sex education which teaches people to not have sex outside of marriage, and has proved over the years, despite its theoretical feasibility, to be largely ineffective.

Having better conversations about sex begins with parties involved in disseminating information – parents, teachers, guardians and others – beginning without vilifying sex, but rather, seeing it as a natural phenomenon. Contrary to the belief that sex education encourages promiscuity in young people, better sex education can help delay their engaging in sexual activities at an early age.

It also helps children and young adults prevent abuse, make informed decisions about their sexual health and relationships, understand their sexuality and sexual behaviour, coherently define boundaries, and become better at understanding the concept of consent. While preaching abstinence, educating young people on the use of contraceptives such as condoms and birth control pills, sexually transmitted diseases like HIV and HPV, is crucial. In all, it is best to acknowledge that teenagers would engage in at least one form of sexual activity during puberty.

Sybil Fekurumoh is a freelance writer from Bayelsa. She enjoys writing poetry and volunteering for programs that promote children education and wellbeing. Connect with her on Twitter and Instagram @toqueensaber.