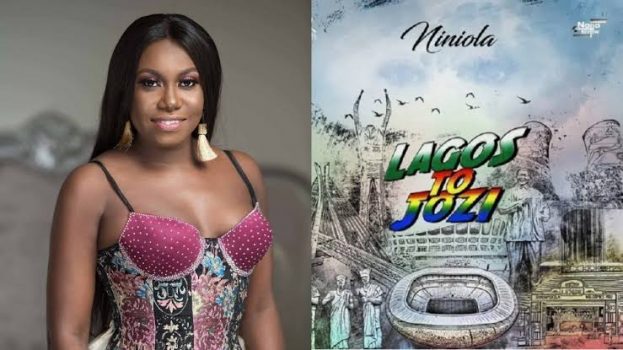 Niniola has always been grateful for the South African love, and finally she pays them back with this EP, Lagos to Jozi. With the current wave of Amapiano across Africa and the world, it’s exhilarating seeing the Afro-house Queen doing something for the genre…

Two-time Grammy-nominated artiste and self-proclaimed Afro-house queen, Niniola has shared her new extended play “Lagos To Jozi” with her fans.

The Drumroll Record artist is on a creative roll right now following the release of the four-track project on November 12, 2021.

“Lagos To Jozi” was released after her ballad EP “6th Heaven” dropped in March 2021 and her much anticipated sophomore album “Colours and Sounds” was churned out in October 2020. It will be recalled that she was crowned the best female vocalist performer at the 2020 headies awards for her song “Addicted.”

Niniola’s explosive rise in 2017 was one of the standout points of that year. Her breakout single “Maradonna” became the party shaker in faraway South Africa before Nigerians woke up to the juiciness embedded in that Sarz-produced track. For Niniola, “Maradonna” was the crystallisation of her age-long striving to crack the industry code; the mission to be well-known in the music industry.

Born to a polygamous family in Lagos, Niniola has always been around music. She attended the University of Lagos for her first degree. A few years after graduating, in 2013, she participated in the sixth edition of the now defunct music reality show “Project Fame West Africa” where she became the third runner-up.

The money made from the contest was channeled into her debut single “Ibadi,” which was released in May 2014. The success of “Ibadi” served as the domino effect for other singles released. On each record, she steps up the momentum; whether she is crooning about a lover who shatters her heart with a Cupid arrow or she is inviting the listeners to the dance floor, Niniola has always been a delight to listen to.

If 9ice had “Gongo Aso,” and 2Baba’s legacy is centered on “Africa Queen,” Niniola would forever thank her star for making a record like “Maradona.” She has been milking the song ever since she released it. Beyonce sampled the song on her “The Gift” album. Niniola also had a co-sign from Drake and Timberland; she featured the latter on her last album.

It has always been evident that South Africans acknowledge Niniola more than Nigerians, and she was once erroneously referred to as a South African artiste. On this new project, she pays homage to the two cities of Lagos and Jozi (Johannesburg).

Nigeria and South Africa share a lot in common. Nigeria was one of the countries that fought for an end to apartheid in South Africa in the late 20th century. At the beginning of the current Afrobeats movement, the South African-based television station, Channel 0 was the go-to station for Nigerians whenever they want to watch music videos. The then esteemed Channel O Music Awards was like the African Grammy. Also, a plethora of Nigerian artistes choose South Africa as their preferred location to shoot for their music video. Artistes from both countries collaborated on songs.

In 2013, Mafikizolo’s boisterous house music “Khona” spilled to Nigeria, a year after Davido collaborated with the group on “Tchelete.” In 2018, Dancehall king, Patoranking and rapper Reminisce explored the Gqom, a deep house sub-genre on “Available” and “Problem.” In August 2020, former Chocolate City president, DJ Lambo released an Amapiano-centered EP which she called “A Tale Of Two Cities.” The seven-track EP featured artists from Nigeria and South Africa.

Niniola invites two South African musical icons, “Oskido,” and the revered DJ Lady Du for this musical voyage. At the end of the 17 minutes play, you are bound to bop your head, dance like an innocent kid to the bright kwaito percussion, shattering bass and hi-hats on the Amapino records.

Niniola taps music producer and legendary DJ Oskido on “Commando.” It’s a tale about what went down between Niniola and a lover who takes care of her, money- and otherwise. One thing you can’t take away from Niniola is the manner she says lewd words and expressions without running afoul of the censoring board. For example, when she says, “Commando,” you hear the inflection of “Come and Doo” (come and have your way between my thighs)

On the previously-released “I Did It,” Niniola recklessly embraces her truths, and the superfluous production makes the message sink in. “I did It” translates into “Idi” (buttocks) in Yoruba. Underneath, both Niniola and Lady Du relieve a nice time with an imaginary boy who is a big spender.

Off her sophomore album, “Colors & Sounds,” Niniola utilises Amapiano in tracks like “Addicted,” “Look Like Me,” and “Oh Sharp” featuring South African singer, Busiswa. “Dig Dig,” is produced by Ghanaian-born music producer, Guilty Beatz; it’s a continuation of the unresolved issue on “I Did It.” Niniola openly expresses her admiration for a guy with an informal invitation to the bed. She sways the vocal when she wants; half pleasing and half teasing. She leaves you to pick the one you want.

“Lagos to Jozi” races to the finish line with the funky and hilarious “Too Sweet.” A typical Niniola’s record, it is a return to the status quo of uttering 18+ plus expressions in the best and alluring ways.

Niniola has always been grateful for the South African love, and finally she pays them back with this EP. With the current wave of Amapiano across Africa and the world, it’s exhilarating seeing the Afro-house Queen doing something for the genre. However, the brevity of the album might make an optimal evaluation difficult. With just two new songs on the four-track project, Niniola should have included more artists like Focalistic, Master KG, and others for a broader perspective. The themes are restrictive.

After spinning the EP more than eight times, it is safe to say that Niniola was having fun on this EP. With the recent xenophobic attack between the two nations, it’s thrilling seeing artists from both sides curating cultures for the general audience.