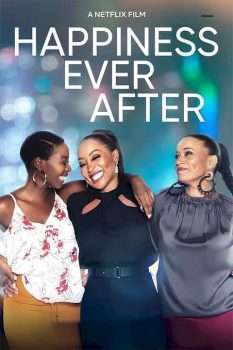 “Happiness Ever After” Review: In This South African Romantic Drama, Choosing Oneself Is True Love

Imperfect as it is, “Happiness Ever After” is a romantic drama that is pleasing to the senses. It is genuinely entertaining…

When “Happiness is a Four-Letter Word” opened in South African cinemas in 2016, it was a huge box office success, outperforming most of the international releases of its time. Based on the award-winning book of the same title by novelist Nozizwe (Duduzile) Cynthia Jele, the movie followed the lives of three women navigating love, relationships, happiness and hurt. In March, 2021, although Netflix had no hand in “Happiness is a Four-Letter Word,” it was announced that a sequel was in the works as a Netflix original. That sequel was released in November, 2021 as “Happiness Ever After.”

A South African romantic drama directed by Thabang Moleya, who also directed the original, and written by Ayanda Halimana, “Happiness Ever After” is inspired by characters created by Jele in her novel. Renate Stuurman, Khanyi Mbau and Richard Lukunku reprise their roles from the original movie, and new faces are added in Nambitha Ben-Mazwi, Yonda Thomas, Loyiso McDonald, Xolile Tshabalala, and Nollywood’s Daniel Etim-Effiong.

“Happiness Ever After” picks up about five years after the events of the original. Once again, the women are navigating love, relationships, happiness and hurt. Princess (Stuurman), an art gallery owner whose artist boyfriend Leo (Lukunku) disappeared on her while she was pregnant in the original, now has a 4-year-old daughter and a partner, Maxwell (Etim-Effiong), who treats her child like his own. Businesswoman Zaza’s (Mbau) husband has died, leaving a fortune for her and their children. And their new friend and yoga instructor, Zimkhitha (Ben-Mwazi), who voices the narrative in the movie, has just moved to Johannesburg for a fresh start after a bad relationship.

However, Nandi (Mmabatho Montsho), the lawyer who doubled as the central figure and the narrator of the original, does not appear in this sequel. Thankfully, the movie gives a brief but easy-to-miss explanation of her disappearance. Nandi has moved out of the country with her family, and her husband, Thomas, “is spoiling her rotten.”

The sequel mostly follows the same formula as the first movie, initially feeling tired and unoriginal. One woman is with a good man but gets distracted by a man who caused her pain and loss in the past. In the previous film, it was Nandi; this time around, it is Princess. Leo, the father of her child, returns out of the blues, and Princess begins to question her relationship with Maxwell. Another woman falls in love with a man who makes her believe in possible happiness but who simply cannot commit. Princess played this part in “Happiness is a Four-Letter Word.”

Newcomer Zimkhitha takes her place in “Happiness Ever After” where she falls in love with Yonda (Thomas), an entrepreneur who refuses to commit to her because of a past relationship trauma. Where the original and the sequel diverge is in their resolution and in Zaza’s story. In the original, Zaza found solace in another man’s arms as she grappled with her forgiving husband’s busy schedule. This time, her late husband’s strong-willed sister, Fakazile (Tshabalala), does not consider Zaza to be deserving of the family’s name or fortune and seeks to cut her off.

Taking lessons from criticisms of the original, the sequel does a better, albeit imperfect job of introducing its characters by name early in the movie, and there is a better effort in the sequel to endow the men with personalities beyond being love interests. At least, Yonda has a background and a story of his own, a past that plagues his present and prevents him from so much as considering a future with Zimkhitha.

But all we know about Maxwell is that he is a lecturer who loves Princess and takes her daughter as his; other than being the “perfect picture of stability” as Zaza put it, we have no idea who he is. And as a sequel, not enough background is given into the older characters to keep confusion at bay for viewers who either missed the first movie or have forgotten certain aspects of the story due to time lapse.

In its own right, “Happiness Ever After” is a decent and enjoyable movie. It relies on a steady supply of conflict, even if the conflicts feel repetitive. Zimkhitha and Yonda go back and forth in their unstable relationship, if theirs can even be called a relationship at all, and the men in Princess’ life are caught in her indecisiveness. But it is Zaza and Fakazile’s conflict that leaves the lasting impression, and at its peak, we are treated to some of the most engaging scenes, anchored by the movie’s strongest actors (Mbau and Tshabalala).

As far as romantic dramas are concerned, the movie excels in the resolution department. There is an initially uncomfortable but eventually heart-warming public declaration of love, with cheering onlookers. We are also rewarded with an unconventional happily-ever-after, particularly in Princess and Zaza’s stories, one where the real happiness is in knowing and choosing oneself rather than being what everyone else says one is or ought to be.

In fact, the screenwriter must be commended for Princess and Zaza’s growth as characters. When we first met her in the original film, Princess was not the “wife type.” Yet, she found herself trying to be just that. By the end of the sequel, she chooses to be true to herself rather than force herself to settle for a more acceptable lifestyle. In Zaza’s case, she chooses to become a better version of herself, making an unsurprising but unexpected effort to earn the respect she demands from her sister-in-law.

Ultimately, the women of this movie find happiness on their own terms and to their own taste, and choosing themselves, in spite of all the drama, is their true love story.

Although both the original and the sequel present women’s friendship in a mostly non-stereotypical and celebratory manner, it was almost as if the women, in “Happiness is a Four-Letter Word,” had nothing in common other than their joint massage sessions and “men” troubles. From the ghosts of relationships past to the ghosts of relationships present, “Happiness Ever After” does not escape the cliché either, but here, the friends go beyond just conversing about their problems at their yoga and massage sessions to actively doing nice things for one another. And through Zimkhitha, the beauty of finding sisters in friends is nicely showcased.

The Netflix sequel must also be praised for the noticeable improvement in makeup, wardrobe and general glamour. The locations, interior and exterior, are beautiful in themselves but also beautifully captured by the exceptional Lance Gewer who was also the cinematographer for the original film. And the soundtrack is deliberate and well-selected, especially with perfectly-timed songs like Sishii’s “Nothing New,” Nasty C and Ari Lennox’s “Black and White,” and “Certified” by Zethu Mashika and Miz Traycee.

Imperfect as it is, “Happiness Ever After” is a romantic drama that is pleasing to the senses. It is genuinely entertaining. And if one does not expect heaven from an earthly creation, this movie does not leave you with regrets.