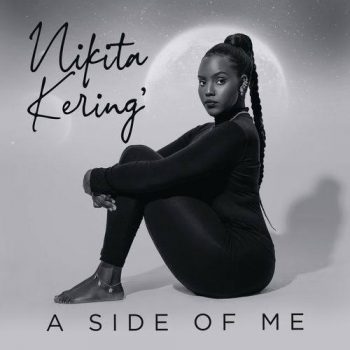 Review: Nikita Kering’s “A Side Of Me” Is an Intriguing Start For the Kenyan Sweetheart

Nikita Kering might be only 19 years old and still fresh within the music scene, but the Kenyan chanteuse is fast-becoming a force majeure within the East African musicdom….

The singer connects her sharp-eyed observations with her vocal prowess to unlock a magical, evolutionary and innocent side of her. And she does a good job sounding like an African Taylor Swift while at it.

Spinning off with an unusual 26s vocalised rhythm, Nikita Kering dives into her own unique universe of upbeat Afro-RnB/Country Pop. And within this vocal vortex – an extended play (EP) – dubbed, “A Side of Me,” Kering goes on a tour within her emotions, triggered by a ‘fictional’ heartbreak.

Kering might be only 19 years old and still fresh within the music scene, but the Kenyan chanteuse is fast-becoming a force majeure within the East African musicdom. Just last week, she was honoured, for the second time, by the All Africa Music Awards (AFRIMA) as the Best Female Artiste in East Africa (her first win was in 2017). The young singer possesses a vocal mastery that instantly puts her music on the same pedestal with other A-list amazons such as Tiwa Savage, Tems, Makhadzi, among others.

Within “A Side Of Me,” Kering experiments a bit with different vocal ranges, styles and tempos, but her Taylor Swift-esque vibe dominates the project. It remains stunning that she decides to explore these more Westernised singing styles, while having her entire musical influences rooted in African music. It isn’t certain if she would stick with this vibe like the Durban music queen, Shekhinah Donnell, as Kering affirms that she is intentionally experimental during this takeoff stage of her career.

“It was a mixture of all of my dreams and people that I look up to. It really was an experiment. And the reason it’s called ‘A Side Of Me’ is because it’s just one part of me that needs to be seen. And that’s why the EP just sounds like Alicia keys, then we have Tiwa Savage, and then we have everything. But then there’s soon to be a lot of other stuff that people are yet to see,” she tells Nadeska Alexias on a chat with Africa Rising Radio.

She adds that, “It’s just a portion of what I have. And it was a time for me to figure out who I am and I’m still trying to understand myself. This was purely a selfish project. The reason it was a selfish project is because it was an experiment. I didn’t even know what the hell my sound was.”

Definitely sound experimentation is a path that has worked for so many other musicians in the industry, such as Asa, Wizkid, Burna Boy, and many others. The result is crystal clear: the music evolves to its finest grandeur. And with “A Side Of Me,” Kering already sows the seeds for this evolution.

Nikita Kering has continuously defied expectations for a woman her age. Since she fell in love with singing at age 3, she has steadily paced her growth within the music scene. Lyrically, she also never considered herself a songwriter, until her mother nudged her at age 16 to write her first song – a song she feels did exceptionally well. At age 18, she was already gaining widespread attention, enjoying mentorship from Mr. Eazi’s EmPawa Africa programme, as well as advocating body positivity for women. Now, she walks around with her head high, with an EP and an even more popular lead single dubbed, “Ex.”

From “Where You Been,” where she yearns for her lover, and his unrequited love, to “Never Let You Go,” where she professes her unflinching fidelity to her lover, Kering peers into a Disneyland-type love story that is rather more dreamy and drenched with imagination. One key element in her music is her ability to connect with pain, regardless of whether she directly experiences it. And this is the magic of “Ex,” the smash-hit love melody that swept across Africa, earlier this year.

Her storytelling actually soars brilliantly on this project, with simplified imageries, more metaphors, and enjambing lyricism. Arguably, it appears that her lyricism could be better with more personal and introspective songwriting.

On “A Side Of Me,” Kering gives off a mellowed, teenage-lover vibe, which she has obviously been inspired by for years. While the project is quite a brilliant introduction into the discography of a budding singer, it also holds little replay value as a body of work. Melodically, the project appears like a monochrome artpiece. Think of it like eating very spicy food (like curry stew) and eating bread and omelets; which are you likely to eat more a lot? And it doesn’t mean the omelets cannot also be sophisticated as curry stew.

It just reveals that some vibes or genre styles need to be well marinated with more abstract musical elements that can uplift the listening value of the song. For instance, it is quite difficult to listen to the instrumentals of the songs off this EP, as they are mostly too high-pitched, near noisy and less melodic. However, listening to her songs individually, and not as a body of work, allows for an exciting foray into Kering’s music.

Nonetheless, it is still her elementary phases, and Nikita Kering dazzles with enough intrigue, drama, and sass for a music queen. The African Taylor Swift is likely to expand beyond the shorelines of East Africa, as her music is not just relatable (to adolescent adults), but exciting to hear.

A few special mentions on the EP are “Where You Been,” “Crossing Lines,” and “Ex.” They radiate the core of the singer’s essence – a powerful singing voice, with a heart that’s eager to experience. On “A Side of Me,” Kering gives all of her, however minimalistic, emotive, and naïve as it can get.

Chinonso Ihekire is a music critic, journalist and filmmaker based in Lagos, Nigeria. He believes in the power of using art to positively radicalise society. His works hacve appeared in other African publications, such as Wakonte, Guardian, among others. Reach out on Instagram @Chinonsotherevolutionary and Twitter @ChinonsoIhekire

A Side of Me Kenyan Music Nikita Kering