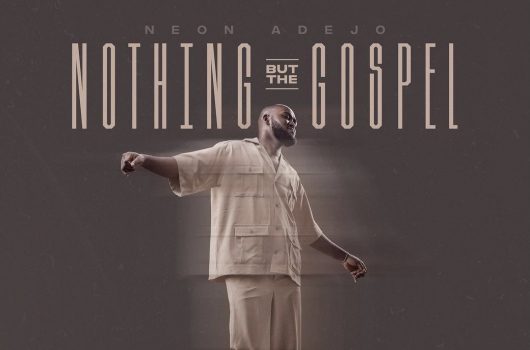 Neon Adejo’s Latest Inspiring Album, “Nothing But the Gospel,” Reveals What the Gospel Really Is

Having emerged from a Muslim background, one would agree that the conversion of Neon Adejo was rooted in life-transforming experiences he must have had with God…

Judging from the root of Gospel as a music genre, it is meant to be soulful, uplifting, a source of comfort, a channel of hope and so much more. Gospel songs, as far back as when African-Americans were yet slaves, were deeply rooted in spiritual fellowships. In fact, that period marked the rise of Gospel music. It was the only way the slaves could unburden their hearts to God. It granted them the opportunity to communicate their emotions, and strength in lyrics carved from their experiences.

Neon Adejo has replicated this in his latest album, Nothing But the Gospel. The entire album, housing seven powerful tracks, tilts towards the works of God’s grace and the testimony of the life of the artiste.

Having emerged from a Muslim background, one would agree that the conversion of Adejo was rooted in life-transforming experiences he must have had with God. The song writer and worship leader  came to limelight after the release of his first single, “Take It Away,” and “Chinecherum” which was embraced by Christians and non-Christians alike.

Adejo’s songs, centered on Christ and his grace, have found their seats in people’s heart, judging from the over one million streaming and downloads on Boomplay.

Adejo is known for his unique vocal texture, style, and his ability to run in-between riffs and runs as he sings. His first album, Tell the World, contains the message of hope, light, God’s grace and love. Like his previous songs, Nothing But the Gospel exudes power, and is capable of bringing people to their knees in worship.

“Consistent” is one of the most polished tracks on the album. It starts with a seemingly excited audience, and a sudden thrust of the base drum with a blend of the bass guitar, followed by alluring chords from the piano. The voice of Adejo didn’t run short of the excellence that came with the intro. Like an icing on the cake, Adejo’s voice accompanied the intro, with lyrics carved from a deep part of the heart of a man that loves God. Here, he acknowledges the consistent nature of God’s love.

Further, Adejo sees God’s consistent love in his death on the cross, even when Adejo was not deserving of such sacrifice. The subtle touch of the lead guitar in-between the song is soul-clinging to say the least. It enhances the song to fit appropriately into the seat of Afro worship.

“Eze Ebube” (Igbo for “king of glory”) has received a great deal of acceptance among many since its release. The lines, “Eze Ebube see how far you’ve brought me, Eze Ebube I’m so glad you found me worthy. I can see, I can tell, and I know it’s your grace all my days I will sing your praise,” that make up the chorus is simple and precise, and can be sung independent of the verses.

The track begins with a combination of sounds from the cymbals, random scales from the piano, a background strike of the acoustic guitar followed by a heightened beat from the snare drum. The line in the vamp that says, “grace found me,” is an expression of what God’s grace does in the life of the singer. It found him, saved him, redeemed him, sustained him and made him who is.

“Atmosphere” starts with what seems like sounds from a violin, subdued by intense strings from the piano, followed by the appealing voice of the singer. This is a solemn and spontaneous rendition that speaks of the magnitude of God’s presence that can heal the sick, raise the dead and perform other miraculous deeds.

The artiste affirms that when Jesus enters a place, he makes all things new, turns the darkness to light. Adejo affirms that Jesus is always in the hearts of believers. This song is powerful and capable of generating the desire to pray in its listener. The song fades with the sound of fervent prayers from people in the background.

Another soulful song on this album is “Grace Is Working.” Adejo, in simple lyrics, communicates the effectiveness of the grace of God. He establishes that the death of Jesus Christ has made grace available to him, and this grace is working for him. In alignment with the title of the album, this song is nothing but the proclamation of the gospel. It paints pictures of what believers can do as a result of the salvation that they have received through the grace of God. Like every song on this album, “Grace is Working” comes with a beautiful, high-spirited sound that would aid the receptivity of listeners.

“Free” starts with the combination of the bass guitar, well blended with the bass drums, the faint clash of the cymbal and the calm intrusion of Adejo’s voice. Here, the lyrics communicate the victory the artiste has won from the price that Jesus paid on the cross of Calvary. The lyrics proceed to exalt the name of God for setting Adejo free.

As the production progressed, there was a beautiful transition in the bridge. A heavy use of guitars, led by the acoustic guitar, was introduced to enhance a Rocky style in the song. This song is not short of a contemporary rock record. The latter production of the bass guitar complimented the thick texture of the artiste’s voice and enhanced the beauty of the song.

Introduced by the bass guitar and a sudden hit of the base drum, the piano comes in with strong chords which form the sound progression of “I Agree.” The richness of the artiste’s voice was heavily utilised here, as the ending notes of almost each line either ended with a soulful minor or a slur.

This contemporary Afro worship song speaks in affirmation to what God says about the believer. They may be contrary opinions to what Christ has done, but the truth remains, the believer is no longer in chains nor a slave to sin. He is free and cannot be contained. All believers need to do is come into an agreement with God has said about them.

“Chukwuebuka” (Igbo for “God is mighty”) begins with the singer’s voice and subtle scales from the piano. The lyrics are carved from the victories God has given the artiste. The entirety of the song is soaked in worship and gratitude to God. A detailed listener would deduce that Adejo’s vocal skills bear a striking resemblance with the style and riffs of popular Nigerian singer, Nosa.

From Adejo’s previous songs and albums, it is obvious that the artiste has found a unique calling, and that’s to quicken people’s spirit and drive their hearts into what God’s grace is capable of. After his conversion to Christianity, Adejo is undoubtedly passionate about souls and how they can be blessed by his songs. From the beat, to the blend of instruments, the voicing, to the coordination of the voices from the backup singers, no track on this album falls short of the touch of excellence.

Albums like this show that Nigerian Gospel songs are fast becoming the best songs the world has heard yet. In 2022, music reviews on the albums of Gospel artistes such as Emmanuel Iren, Waje, Judikay, and others have clearly proven that the Nigerian Gospel music scene has climbed another height in taste and delivery. Apart from the wordiness and the verbosity in the longest track, “Consistent,” the rest of the songs are easy to sing. This, of course, is not a limitation to the blessing the album is meant to be to listeners.

Neon Adejo Nothing But the Gospel