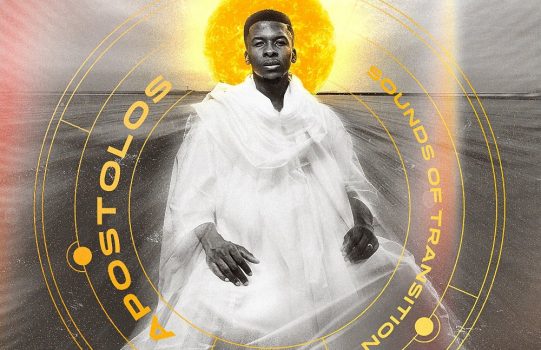 After many years of pastoring and writing deep spiritual songs, the Lead Pastor and founder of the Celebration Church International, Pastor Emmanuel Iren, releases his album, Apostolos – Sounds of Transition, his first album in his journey in the gospel music scene. Despite being the Lead Pastor of a fast-growing church, Iren shows with this project that he has not been deterred from pursuing his passion for music.

With 13 heart-stirring songs, the album is a combination of mysterious sounds, chants, and lyrics capable of driving listeners into intense prayer sessions. Riding on the waves of well-mashed up sounds and scriptural lines, Pastor Iren delivers the songs with palpable spiritual intensity. Produced by Stephen Adeniyi, Yimika Akinola, and Olusiji Ewedemi, Apostolos features prominent gospel artistes such as Sinach, Nosa, Judikay, E. Daniels, and others.

In his early days, Iren was a drummer. This contributed to his love for music. He started a musical band called “Outburst Music Group,” a group which produced strictly gospel songs. The group released its debut album titled Kerygma (the proclamation of the gospel) in 2017. Iren has ever since remained in the gospel scenes, releasing powerful singles as given by the Holy Spirit.

A gospel album can be so spirit-centered that words may seem to fall short. Ever listened to a song, and you felt like you were being iced from your head to your feet? This album offers the same feeling, alongside a deeper feeling of the presence of God.  For people who have the same spiritual inclination as that of Iren, listening to this album could spur in them the same spiritual effect as when the songs were received. It is crystal clear that God’s breath was piped into these lyrics due to the power they exude. This deduction is rooted in the fact that most of these songs were not written the way conventional songs are done, but rather, were spontaneously received during sessions of the singer’s meditations and sermons.

The opening, titular track is a sonorous song that communicates the message of transition, change, revival, and an unveiling of a new apostolic dispensation. The singer delivers this soulful song by affirming a deep recognition of his call to the body of Christ. It is a call centered on apostolic manifestation, explanatory of the song’s title.  “Apostolos” instills the consciousness that Christians are coming into the season of the long-awaited revival. It further bears the message that, by the reason of the mandate and the mantle that has been handed down to Christians, they can heal the sick, raise the dead and cause changes to happen.

“Holy Ghost” is another Holy Spirit-inspired song that can cause an outburst of fervent prayers. Here, Iren features the phenomenal gospel artiste, Sinach. The song starts with a brief moment of chanting, speaking in tongues and prayers. The singer affirms the Holy Ghost as the light within his soul, the fire in his bones, the power in his life, and his partner with whom he will change the world. “Holy Ghost” is definitely the track every passionate Christian should listen to, as it spurs its listener to meditate and turn to the Holy Ghost as their companion.

“Fire on My Altar” is a song that has received tremendous acceptance among youths desirous of being set on fire by God. As a single that preceded the entire album, the song has been ministered on different Christian platforms and church meetings.  The acceptance of the album is, perhaps, largely rooted in people’s love for the preceding singles. In this song, the singer declares that the fire burning within him is what also burns on his altar.

“The Glory” starts with soft strings finely mixed with a rising harp sound, and a faint clash of the cymbals. Every session of the song, which was recorded live, was met with enthusiasm by the audience as people can be heard screaming in the background. With his clear and emotion-pulling voice, Pastor Iren sings repeatedly sings the line, “my eyes have seen the glory of the Lord.” The 8-minute long song, technically the longest of the 13 tracks, offers listeners the opportunity to savour the song’s essence and stay more intoxicated by the Holy Ghost.

“Prophetic Chant” is a spontaneous rendition with a constant repetition of “Aya ya ya, glory be to God.” With the level of acceptance and prominence chants have received among Christian music, it is understandable why the track was so named. Iren is definitely not the first gospel artiste who has used chants for musical expressions. The gospel singer, Lawrence Oyor, has been an ardent user of chants in nearly all his songs. Oyor has an 8-minute long song, “Eagles Flight,”  which contained predominantly chants and a faintly repeated line by his backup singers. Another popular chant, chorused in many Christian meeting is “Spirit Chant” by Victoria Orenze. Iren’s high-spirited song is not jammed with many lyrics, and its intense beat is capable of provoking an atmosphere of praise.

“Power in Abundance” is a thrilling, melodious high praise with a wonderful tempo. The singer declares that God’s love, power, and the truth of his word, accompanied by his glory is made manifest. He further explains that beyond what people have experienced, more power, grace, glory, and miracle will yet be revealed. The arrangement, upbeat, and notes of this song have a touch of Western music. Listening to it leaves you wondering whether you are listening to Todd Dulaney, Darrel Walls, or Iren. The fact is that the style, lyrics, beat, texture, and arrangement of “Power in Abundance” soars above many Nigerian gospel songs that have been produced locally lately. Unlike the regular arrangements of these other songs, this one is better coordinated and evidently more stylish.

“Grace Changes Everything” is another powerful song. Iren once again features Sinach. The song starts with a touch of Country music accompanied by soft chords, an obviously happy audience, and afterwards quickly segues into a beautiful mild jam led by the sounds of the acoustic guitar. The singer affirms that as children of God, we are soaring in God’s grace. “Grace Changes Everything” is simple to learn and can be enjoyed by people who are spiritually-inclined.

“The Glory of the Lord Reveals” is another remarkable track that appreciates the glory of the Lord. The notes and rhythm of this song can sure give lovers of Rock music the satisfaction that comes with listening to a nicely blended Rock song. Words fall short in describing the beauty of this song, and how classy it sounds when placed side by side with regular Nigerian gospel songs.

“Fire on My Altar” and “The Glory” are both reprised on this album. The singer made adjustments to the beat and the tempo of both songs, but the lyrics and the message remain the same.

“Overcome” is a track that uses scriptural verses to establish the victory that believers are promised in the world as a result of what Christ has done. The song ends with a brief spirit-filled moment of speaking in tongues. 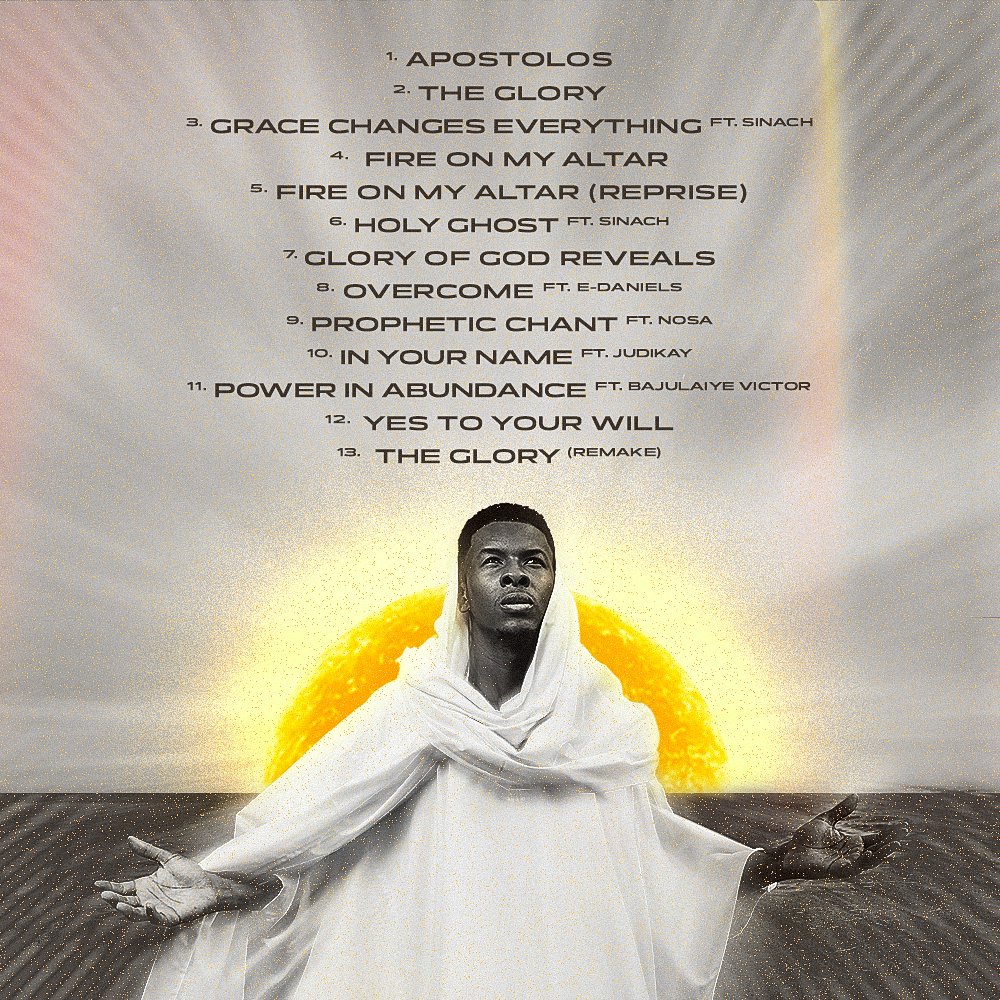 “Yes To Your will” is a soulful song that shows one’s surrendering to the will of God. The singer affirms that he would go to any length to prove that he is fully surrendered to God’s will.

For these kinds of songs, it takes an individual on the same spiritual frequency as the singer to effectively connect and squeeze out their full essence. Africa as a continent and Nigeria as a country is made up of highly religious people, with the older population bent on following conventional songs and hymns. The heavy use of chants and tongues-speaking in music, then, is still met with some level of disapproval within some circles.  This is, perhaps, a factor that limits the audience of this album. However, there’s every tendency that youths who make up the newer, unorthodox core will embrace these songs than the old.

The fact remains that words do not do justice to the quality and spiritual content of this album. This is possibly one of the best gospel albums I’ve listened to so far this year. Every ear that loves good music definitely deserves to hear these songs.