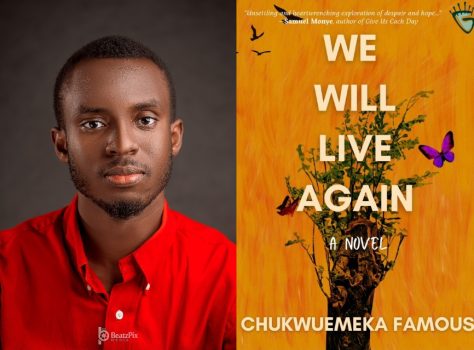 Chukwuemeka Famous’s Debut Novel, “We Will Live Again,” Set for Publication in November 2022 by Griots Lounge

Famous notes that it were the conflicts between his father, mother, and younger brother that led to his writing the novel.

Nigerian writer, Chukwuemeka Famous’s debut novel has been set for publication in November 2022. The novel titled We Will Live Again is to be published by Griots Lounge Publishing in Nigeria.

We Will Live Again is a story about a father pushed to give up on his religion; a once calm mother, Chika, who gradually becomes defiant, and two brothers, Woha and Okey who would become separated. The family is forced to flee to their village when war sets in. Set before, during, and after the Nigeria Civil War, We Will Live Again is a story of disintegration, and then hope for a rebirth.

In his review of the book, Samuel Monye, author of Give Us Each Day, describes the book as “an intimate exploration into the complexities of family and the thin thread that binds most together.”

Famous describes the family conflicts and disputes he encountered, and how they led to his writing the novel.

“I asked myself a lot of questions then; what exactly does it mean to be together, united, as a family? Certainly, every member of a family will have different motives, or opinions about anything. Therefore, to what extent is the unity of the family dependent on the willingness of its members to sacrifice some of these motives? Why do most children grow up together, and when they become adults, they become enemies? What is it about adulthood that causes division between siblings?” he said.

Chukwuemeka Famous has a degree from the University of Benin, where he began writing a literary blog. His short stories have been published in Ibua Journal, The Shallow Tales Review, All Ears Magazine, Writers Space Africa Magazine, and elsewhere. He currently lives in Lagos.

Griots Lounge Publishing operating from Manitoba, is dedicated to publishing great stories and encouraging young writers who have the right skill and vitality to expand the collective craving for storytelling.

The book’s cover is designed by Joshua Effiong.