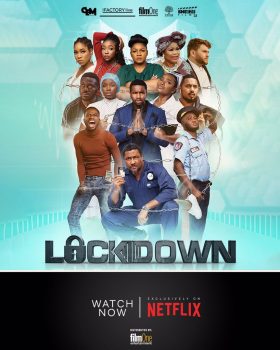 Lockdown keeps a bunch of people, many of whom are strangers, literally locked down in a hospital after a patient tests positive for the fictional but deadly holo virus…

There is a lot that doesn’t work with Moses Inwang’s Lockdown. If you go in expecting a savvy movie about a potential pandemic, especially considering that it came off the back of the COVID-19 pandemic, you’ll be sorely disappointed. You’d be even more disappointed if you’ve seen 93 Days, Steve Gukas’ 2016 film which was based on the 2014 Ebola outbreak in Nigeria, the same real life events that inspired Lockdown. Nobody expects a perfectly accurate medical drama. Nobody even expects perfection in portraying the horrors of a pandemic-induced lockdown such as the one that the Coronavirus put us through in 2020, the year before this movie first premiered. But Inwang (Body Language, Bad Comments) takes a situation that many filmmakers across the globe have also attempted to depict through films and television shows, and he makes a film that doesn’t quite work as a pandemic movie but somehow manages to actually be interesting.

Lockdown keeps a bunch of people, many of whom are strangers, literally locked down in a hospital after a patient tests positive for the fictional but deadly Holo virus. It takes anywhere from two to twenty-one days for an infected person to begin to show symptoms, so everyone in the hospital at the time of the lockdown has to be quarantined for twenty-one days. This is very difficult news for the people in the hospital who just want to get to the important things waiting for them on the other side of the wall. With a ridiculously armed police — complete with snipers — barricading the hospital and questionably prepared to use lethal force, defying the lockdown comes with the risk of death. It feels like an imprisonment, but while some of them plot to get out, others start to realise that they may be just where they ought to be.

In actuality, they are all exactly where they ought to be. In the world of the film, it’s just bad luck. As one of the characters put it, they just happen to be at the wrong place at the wrong time. But outside the world of the film, it is abundantly clear that the hospital was created for the sole purpose of trapping those particular characters together. In a remarkably well-captured first act, before patient zero is brought into the hospital, the film takes special care to establish the backgrounds and motivations of the central characters and how they end up in the hospital on the fateful day. A groom (Ben Touitou) and his best man (Jide Kene Achufusi) have both a wedding and an investment meeting lined up for the day, but they end up having to take a child to the hospital after witnessing a hit-and-run. A deliveryman (Tony Umez) who needs to buy drugs for his dying wife shows up for his pay cheque, believing that he finished his deliveries the previous day, but finds that he has to make one last delivery to the hospital. A poor young man (Josh “Josh2funny” Alfred) wins the lottery and has only four days to claim his winnings, but he drops by the hospital after sustaining a bad injury while celebrating. A jobseeker (Ini Dima-Okojie) rushes to the hospital when she discovers that she needs a medical report for a job interview scheduled for that morning. A married man (Deyemi Okanlawon) wakes up from a night with another woman only to hear that his pregnant wife was admitted while he was cheating. Nurse Chiamaka (Chioma Chukwuka Akpotha) agrees to cover a colleague’s shift for a charge despite having just worked a double shift. And patient zero (Fares “Oyibo Rebel” Boulos) has just flown into the country for a crucial business meeting when he starts to feel sick.

Other than the hospital employees, practically everybody gets to the hospital just as the film starts. The deliveryman and the jobseeker have to wait in reception for a long time because things are busy at the hospital. But they continue to wait even after the reception is cleared out, because how else will they be around for what the writers want them for? By the time the hospital gets locked down, there are no patients other than the newcomers (most of whom aren’t even sick) and the pregnant wife. Ironically, most of the film’s sick people are located outside the hospital and serve as motivation for the people in the hospital, the majority of whom are there because something urgent and unexpected came up at the last minute.

Once they are all in the hospital (or at least most of them), the film’s primary goal seems to have been achieved. From there on, it all goes downhill. The friction between the characters as well as the attempts to get out of the hospital become heavily repetitive and insensible. The film loses all sense of time. Then, apart from the medical practitioners, nobody seems to understand the import of the situation. The virus feels like a mere excuse for the lockdown, with so much focus placed on the lockdown itself and all the things outside that the people inside are desperate to get to. It’s hard to imagine that a bride (Emem Inwang) and her mother (Sola Sobowale) would be more worried about the groom missing the wedding than they would be about him being potentially infected with a fatal disease. Or that claiming a lottery winning, as strong a motive as that is, would be more important to a man than being alive to spend his new wealth. Or that a person would be so pained about missing an investor meeting that he would not give a moment’s thought to the fact that he could die a painful death.

Even the medical practitioners who understand the situation don’t act like it. Some of them, especially the medical director (Omotola Jalade-Ekeinde), have been exposed to the virus. Yet, they go about the hospital without observing even a shred of proper protocol. Plus, the quarantine period defies all logic, with all the survivors getting released exactly twenty-one days from day one of the lockdown, regardless of when they got exposed. In fact, so little attention is paid to details that even the end credits are a mess, and the first time the exterior of the hospital building is shown, the name at the top of the building is the wrong name.

But, at least, it gets some things right, like the impressive camerawork, an ad placement that actually works with the plot (even if delivered with weak acting from musician Paul Okoye who plays himself), an effective song selection for the soundtrack (even if the score doesn’t quite work), and a cast that delivers more often than not. Yes, there’s just too much screaming, with more anger than any other emotion on display. And some of the acting, particularly from Jalade-Ekeinde and Achufusi, is so mechanical that it’s hard to feel whatever the actors need you to feel — which is unfortunate, since the former is an industry heavyweight and the latter is an undeniable talent. Still, this is a well-cast film. Akpotha carries some of the strongest scenes, even if her stereotypical portrayal is distracting. Umez is the very picture of sombreness in his affective return to the screen in this movie; his demeanour makes his motive even more convincing than anybody else’s. Josh2funny is funny, as the comedian that he is, but he also puts in a good shift. If he overdoes it a little, it’s because the screenplay overdoes it with his character. On his part, Touitou occasionally zones out, but he plays his level-headed character with a radiating calmness. Dima-Okojie and Okanlawon are grossly underused for the calibre of acting that they are known for, but the former’s trademark expressive face and the latter’s trademark passionate approach make them stand out.

Sadly, as different as it is from most Nollywood products, the movie itself doesn’t stand out. It’s the kind of movie that you have to dumb your own self down to watch, which would be understandable if the film — even with its comic elements — took itself less seriously. At the end of the day, it feels like a 93 Days wannabe with an F in research. Regardless, it is watchable. I’ll even go as far as saying that it is entertaining. But it is not a very good film. If we didn’t have precedent for this kind of film in Nigeria’s blossoming industry, the verdict might have been that Nollywood is not ready to pull off serious hospital-based dramas. But it’s been done before. And Lockdown just doesn’t do it well.

(Lockdown was initially released in 2021, and is now streaming on Netflix here).