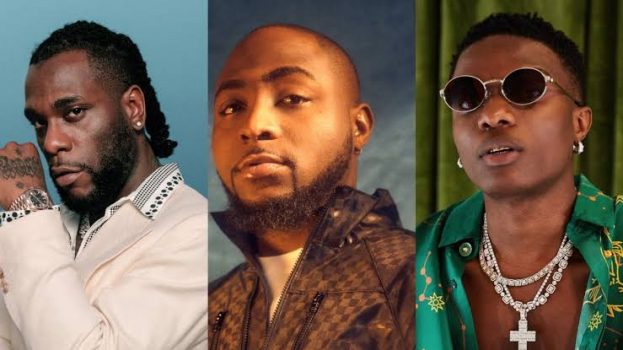 Live Performance Culture: How Has the Trio of Burna Boy, Wizkid, and Davido Fared?

Would 9ice, Khaligraph Jones, Sauti Sol, Cassper Nyovest or any of the musical mavericks that were most popular in the 2010s have been able to sell out the 20,000-capacity of the 02 Arena, or the 90,000-capacity Wembley stadium in London, as at then?

The journey to the future of Afrobeats began before it was even born, as African musicians started to gain more global recognition around the ‘70s and ‘80s. Mavericks like Cameroon’s Manu Dibango, Nigeria’s Fela Kuti, Mali’s Salif Keita, and the Beninoise Angélique Kidjo began to rise to prominence, featuring on major American and European stages.

The dynamics for fame, at that time, was different; it was a crucible capable of being carried by the men and women of grit. It behoved upon raw talent, which was submarined by intense publicity work. Now, with the advent of the new media – digital streaming platforms, Internet penetration, and social media – the rise to fame is swifter, and more explosive. And in the past decade, a few notable names have emerged across the African continent.

While we all toast and clink our beer mugs to their global successes, especially with the acclaimed 02 Arena shutdowns by the trinity of Africa’s most commercially successful artistes — Burna Boy, Wizkid and Davido — one question that keeps ringing in the mind of many, and mine, is on what the future of Afrobeats is going to look like.

On one hand, the global successes have created massive ripple effects to the African music industry in general. And on the other hand, it also sheds light on the pitiable reality of classism that battery-powers the performance culture of African artistes, specifically the Big Three, as their performance quality on stages abroad differs strongly from their performance at home.

When Wizkid sold out the 02 Arena last November, it was a bundle of blessings for the African music industry. Firstly, the major hit and unofficial ‘song of the year,’ “Essence,” became the number one song on Apple Music UK charts. His Made in Lagos album also rose to prominence as the number one on Apple Music UK albums charts. It also propelled the visibility of other African artistes such as BNXN, LAX, Tay Iwar, King Promise, Blaqbonez, Lojay, Bella Shmurda, Ckay, and Tems, who all debuted at the 02 Arena for the first time. The same thing happened with Davido’s recent shutdown of the same 02 Arena where he brought out the likes of Pheelz, Victony, and Focalistic, for the first time.

What these globally-renowned concerts do for the industry is to crystalise the efforts being engineered by the whole herd – from Producers, to A&Rs, to publicists, down to artistes – taking the African sound to the global centre-stage. Genres such as Amapiano, Afro-pop, Afro-fusion, all under their parent genre of Afrobeats, have now become household sounds in European and American communities.

How is it that since the 90s, most contemporary African artistes have not sold out the 02 Arena? Or the Royal Albert Hall? Or the Wembleys? Piracy has been a clog in the wheel of the global growth of Nigerian artistes, especially in the 2010s. This was rife as digital streaming platforms were not accessible to many Africans until the mid-2010s, with adoption crawling across the continent. Would 9ice, Khaligraph Jones, Sauti Sol, Cassper Nyovest or any of the musical mavericks that were most popular in the 2010s have been able to sell out the 20,000-capacity of the 02 Arena, or the 90,000-capacity Wembley stadium in London, as at then?

Nonetheless, we are thankful for the current growth of the Big Three. Their global success has and will continue to open doors for other emerging acts, as well as put major talents on the radar of global music listeners.

Now, there is a glaring contrast between the performance culture of our Big Three in foreign venues versus in African venues, especially their home-base in Nigeria. While Burna Boy’s historic performances in Wembley, or the Grammys continue to mesmerise audiences globally, one would be shocked at the lacklustre quality of many of his home-based performances.

And the performance visuals speak for themselves. From the miming to the sub-par set designs, down to general stage-craft, as well as these artistes starting extra late, it appears that our glorified artistes do not put in as much effort to their performances in their home countries as they do abroad. While it is convenient to blame the show organisers, it also reflects the brand personality of these artistes, who perform optimally abroad and care little for their homegrown fanbase who actually were their first supporters. According to Abdulsalam Tijani, a talent manager in the All-Africa Music Awards, “the problem lies in the revenue allocation. Many show promoters would not put their cash into a sinking hole. Except we see someone doing it purely out of passion, many Africans would not pay high-budget tickets for shows, and you would not blame the show organisers for cutting their coats accordingly. But for the miming, I think there is no excuse. It is just shameful.” Another music expert, a talent manager, Olaitan Francois, believes that it is the fault of mostly the artistes as “they do not rehearse. They go on stage and believe they are in their element, when most times they are just giving basic performances.”

While we fixate mostly on the Big Three. Have you also wondered why there are no women in the trinity? This is also intrinsically tied to our collective success as a continent. The maxim that what a man can do a woman does better is no fluke. In European and American spaces, we have amazons like Adele, Taylor Swift, Beyonce, among others, blazing the torch with their successes. However, in Africa, we struggle with a dearth of commercially successful female singers. The few ones we have such as the Les Amazones D’Afrique, to Tiwa Savage who was the first African chanteuse to sell out the Indigo 02 arena (3,000 capacity), to Teni who also did the same, in 2019, to Yemi Alade who had successful European tours, selling out venues like the Melkweg Centre (1,500 capacity), have not ascended to the global notoriety that they deserve. It is only right that they attract the same attention as them. With a dwindling listenership, generally, it is harder for African female musicians to seize the spotlight like their male counterparts; because they will need to put in thrice as much effort to get the visibility, respect and recognition that they deserve. Imagine if Tiwa Savage started her career with the momentum that Ayra Starr started hers? Or Sho Madjozi the same way that Guchi did?

The performance culture of the Big Three African artistes continues to work as a master-key for the entire industry, attracting wider audiences and spreading the Afrobeats sound to all corners of the world. Yet, it hops on one-leg, as it continues to be attractive on the outside, but sub-par at the home-front. While we collectively address their performance prowess, you might want to analyse their individual efforts. You might want to ask who the Greatest of All Time might be among the three. One has sold out a 90,000 capacity at once before, while one has sold out a 20,000 capacity three times consecutively, and the other one has sold out a 20,000 capacity at once. too. They all have intriguing vocal ranges, with different energy levels on stage. While Burna Boy’s stage control soars, Wizkid’s interactivity with the audience is beautiful to watch, and Davido’s peaking energy is just a brilliant spectacle. But, then, the best is relative, so fans are allowed to make their choice.

Nonetheless, what is most important is the grand picture of the shutdown trend by our Big Three. With Burna Boy set to headline a 27,000-capacity Madison Square Garden, next month, it will be yet another win not just for the Port Harcourt native, but for the entire African music industry. And while our Big Three continue to maintain the momentum, it will be an even bigger win for the continent for us to have more than a Big Three. We can have a Big Seven. Or a Big Nine. And it will be all the better to have female faces among them.