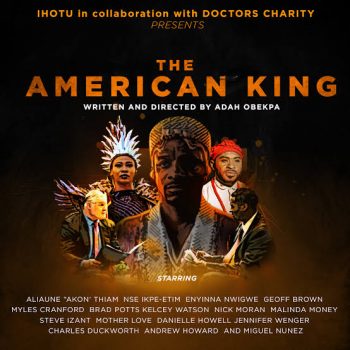 The American King details its backstory over and over again, as if trying to convince its audience. But it forgets to tie up loose ends in the more believable parts…

For very many decades, the question of whether the establishment of a United States of Africa can be possible and what such nation state would look like, has been a subject of debate and activism. With The American King, featuring Akon, Nigerian writer-director Adah Edache Obekpa, working from Hollywood, attempts to contribute to the discourse, simultaneously addressing the nature of the relationship between Africa and the western world. On both of these subjects, Obekpa’s movie does not place the ball in the net. But it does set the ball rolling.

It is the year 2020. A mysterious priestess, played by Nse Ikpe-Etim, visits the United States of America in fulfilment of a 400-year-old prophesy to take to Africa an African-American man whose destiny is to be the African King who will rebuild the African kingdom. The American man’s name is Sebastian, people call him Akon, and he is played comfortably by the real Akon (Aliaune “Akon” Thiam), the famous Senegalese-American singer-songwriter with a few acting credits under his belt. This real life Akon versus movie version Akon becomes a running joke that never runs out. Sometimes, it’s witty; sometimes, it’s not.

Sebastian lives with his sickly but sharp-mouthed grandmother (Jo Anne “Mother Love” Hart) and cannot get a job because of a previous conviction for a drug-related offence. On top of that, Sebastian is indebted to Dimitri (Andrew Howard), a Russian loan shark who is running out of patience with him. To come up with his creditor’s money, Sebastian and his two friends, Peewee (Miguel A. Nunez) and Charles (Charles Duckworth), go around town pretending to be poor Africans in need of charity and fooling people into donating money to rescue Africa. Their major targets are Caucasians, of course, and not even one Black person falls for the scam. But Sebastian’s luck changes when the priestess and her entourage of chiefs alight from expensive cars, bow to him, and call him “Your Majesty.”

At first, Sebastian is convinced that the priestess and her chiefs are hustlers like him and his friends, so he gets away from them. But after the priestess finds him two times after that, interprets Russian, flexes her knowledge of pop culture, and performs a psychokinetic trick, all with the help of an unseen oracle, he agrees to go with them to the Kingdom of United States of Africa. As new royalty in his new country, Sebastian has to adapt to a lifestyle that is nothing like what he’s used to, and learns to be a leader to a people he barely understands, while facing opposition from Kessiena (Enyinna Nwigwe), the heir to the African throne, and Kessiena’s European allies. Meanwhile, in the United States of America, the African-American Vice President (Kelcey Watson) convinces the President (Brad Potts) to take advantage of the situation as an opportunity to win back Black votes for the Republican Party and make history as the president who helped “Make Africa Great Again.” 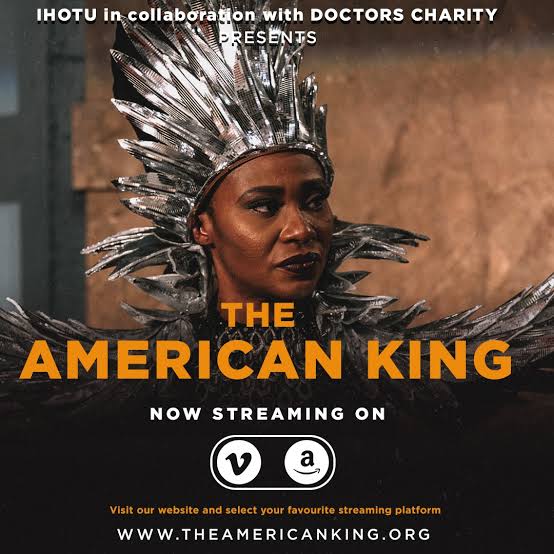 Undoubtedly, The American King is a satire. This fact becomes obvious from the opening sequence, with a Caucasian man, dressed in African clothing and beads, claiming that all people are African, and warning his crowd of listeners to not be fooled by pigmentation. As the movie progresses, Obekpa pokes fun at several social issues, from the white saviour complex to outright racism. He even plays around with the stereotypical representations of Africa that we have seen too much of on western media, especially with jungle references, including sculptures of wild animals lining the palace grounds.

In fact, the movie’s approach to satire is majorly to throw shade. From its fictional American president who wears a MAGA hat — an undeniable parody of Donald Trump — to a robbery scene that parodies the gun control debate, the movie rides on a steady supply of cheap shots. But it is hardly able to land any real punch. Instead, it sneaks in heavy issues in the form of comments and, then, leaves them hanging. For instance, it creates a United States of Africa, with monuments like statues of Nelson Mandela and Queen Amina, drawing from Marcus Garvey’s ideologies and implying that this United States of Africa is a single nation, comprising most or all of Africa. This fictional African nation is ruled by a monarchy. Yet, the new king laments that it is only in Africa that a president can stay in power for 50 years. One wonders which Africa: the real one or the fictional one? Then, it throws in a complaint about the unfairness of the system that requires an American to become Africa’s king. Of course, Marcus Garvey’s plans for a United Africa included people in the diaspora who are of African heritage, but there is a real concern about Africa being saved by a perceived outsider. The American King glosses over the question, merely using that comment to set up a half-baked romance between Sebastian and Keke (Danielle Howell), the American woman who makes the comment.

Then, the movie tries to give credence to its story by rooting the oracle, its priestess and the prophesy in history, with pictures, museum artefacts and historical documents serving as proof, similar to the tale of Andromache “Andy” of Scythia as spun by Hollywood’s The Old Guard. The American King details its backstory over and over again, as if trying to convince its audience. But it forgets to tie up loose ends in the more believable parts, like Sebastian’s African welcoming party that features only Nigerian cultural groups or his coronation as Africa’s King in a venue that has Nigeria’s coat of arms hanging very visibly. Also, placing Sebastian’s mother in the most prestigious adult care home instead of taking her with them seemed improbable, and no reason, subtly or overtly, for this was supplied in the movie.

Still, the movie has some moments that stand out, such as actor Rahama Sadau playing a character who is standing trial for appearing in a music video in which she hugged a man (Nigerians will remember that, in real life, Sadau was banned from the Hausa Film Industry in 2016 for hugging a man in a music video). However, the satire often feels too on the nose, forcefully seeping into almost every statement and event. Plus, it is very frustrating to have to struggle to hear conversations over the extremely loud Afrobeats soundtrack. 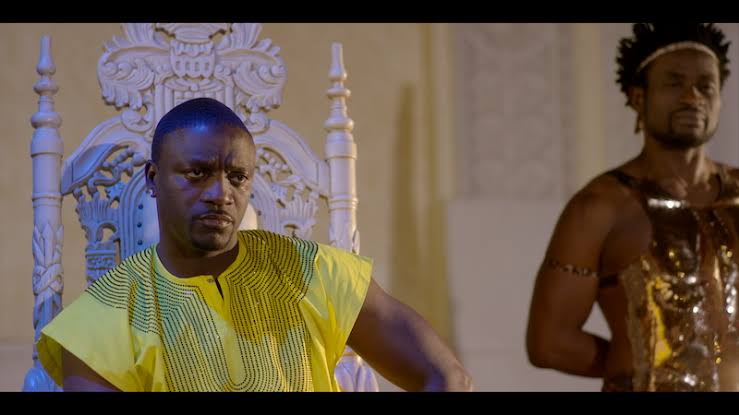 The American King is set up as sort of a reverse telling of Coming to America, with a similar square-peg-in-a-round-hole story. In fact, Lisa Romanoff, the CEO of Vision Film, the distributors of this movie, has been quoted as saying that “The American King is a cross between Coming to America and Black Panther.” As hard as the cast and crew try, and they really do try, The American King does not have as much charm as Coming to America or the depth of Black Panther. And while Obekpa’s movie does deliver on entertainment, it struggles to clearly pass the messages it set out to pass. The movie eagerly lays the groundwork, and it is glaring that there is a statement begging to be made, but, unfortunately, the statement never does get made.

Thankfully, The American King never pretends to be any more insightful than it actually is. It doesn’t even answer, with real clarity, the question of what a United States of Africa would look like. Perhaps, it really just wants to be a cheery movie that points out the obvious and throws in a few easy laughs for good measure. If that is the goal, then the mission has been accomplished. But if the aim is to be a more profound commentary, then, The American King is far from a slam dunk.