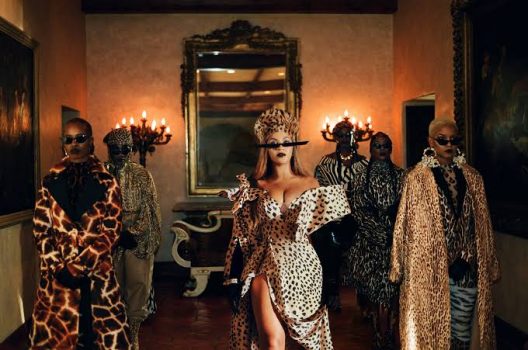 And that is the problem with sentiments: its rare ability to pull the mind of the enchanted away from the truth for a while…

Beyoncé Giselle Knowles-Carter’s music in the past five years has been fresh in many ways, but majorly in her seeming appropriation of African rhythm and culture. However, appropriation might be a politically incorrect word if we understood and admitted that Beyoncé is actually African American and thus “entitled” to “appropriate” what is only hers. Beyoncé’s new music growth would have major effects on African music and art in the coming decades.

Beyoncé seems to be finding her way home in her recent music. She appears to be exploring the potentials that “appropriating” African culture can do for her art. Beyoncé is on a sojourn back home to mother Africa, and it is very admirable to see her return. In her newer songs, Beyoncé shows her pride in being black. I watched the music video of Mood 4 Eva, and perceived that the apparent Afrocentrism in the song, and especially in the video, is culturally significant as well as aesthetically precise, however inexhaustive of the themes and culture it carries. It may now seem that with the attention and currency that African culture is gathering worldwide, the time for African music to thrive is here. The activist temper of Beyoncé’s new music cannot be ignored.

My unguarded thought is that this topic should not have been any newsy, but for the unwholesome, subjugated, and suppressed manner Africans as well as Africa are represented in Western media and art. What is more amazing is that Beyoncé is bringing in the mainstream African artistes on this train with her, featuring talents from Nigeria, Ghana and South Africa. But, still, we do not forget that Africans were, for a long time, excluded from the centre stage in world music and art, with many of them such as Wizkid, Burna Boy, Ice Prince, and many others denied the spotlight they deserved. In a 2017 Pulse article, Wizkid laments on the divisiveness and bias in Western, even black, award shows such as the Black Entertainment Television (BET) award. Two years earlier in 2015, Wizkid, Fuse ODG and Yemi Alade who were nominated for the BET awards decided to boycott the event because they were given their awards backstage before the show began. In 2019, when Grammy award-winning Nigerian singer, Burna Boy was billed to perform at Coachella, he criticised the show management for including his name on the publicity flyer in tiny, almost undetectable font. These and many more show how much denigration African artistes have been made to go through on the bigger stage. However, things are changing.

In Mood 4 Eva, Beyoncé features Malian singer, Oumou Sangaré, Donald Glover and Jay-Z. By her featuring Sangaré, and with Beyoncé’s god-like fanbase, Beyoncé is set to revamp the face of African music in her wake. “I believe that when Black people tell our own stories, we can shift the axis of the world and tell our REAL history of generational wealth and richness of soul that are not told in our history books,” Beyoncé says in a post on Instagram, adding that her decision to “appropriate” African culture in her music was due to the events in 2020 America involving police brutality and the killing of George Floyd and Breonna Taylor. Beyoncé goes on to say in the post that, “I wanted to present elements of Black history and African tradition with a modern twist and a universal message, and what it truly means to find your self-identity and build a legacy.”

There have been negative backlashes at Beyoncé over her recent portrayal of African culture in her songs. Critics say that there is more — and this is true — to Africa than depicting lions and chalked black faces. However true this is, it is inevitable since nothing ever done can ever be enough. British-Ghanaian filmmaker, Stephanie Boateng, speaks of Beyoncé when she says that, “The contention follows years of frustration over Western media’s frequent depiction of Africa as a homogeneous entity.”

The problem, as it were, with Beyoncé’s portrayal of African culture is not in her showcasing of the people and its culture, but in the succumbing of her art to the easy reliance on stereotypes to depict the general. With the need to depict black power, we find that using black muscular males or spear-wielding women is the go-to symbol. To depict nature, music artistes and movie directors appropriate the image of lions or cheetahs, or black (why not white?) panthers. More misleading is the “black” African accent and its odd, mismatching derivatives, which never seems to change in every depiction.

When Ryan Coogler’s Black Panther was released in 2018, it easily became one of the biggest movies of the time because of the sentiments it drew in the black community. It drew a cult following. In Wakanda, blacks saw the ideal black Utopia, and in T’challa, blacks all around the world saw a new African President, after Barack Obama, by the way. And that is the problem with sentiments: its rare ability to pull the mind of the enchanted away from the truth for a while. For sometime — until the dust settles — the enchanted is focused on what is being shown rather than what should be shown in reality. This is in turn a consequence of a system of deprivation and seclusion shown the black race all over the world. And the dust settled after the reel finished. After this, critics began to see the untruths that should have been said more truthfully.

We saw that the title itself, “Black Panther,” was racist. Really, why not “White Panther”? Why the priority on colours? The spotlight went off, and we realised it was all a dream, a facade; and then we investigated. It is only after celebrating over a first black king that blacks begin to understand he could be a cold-blooded killer and narcissistic dictator. That is the truth about sentiments. We only realise we have been sold a lie, or perhaps a partial truth, when we learn we only saw a movie. T’challa was not our king, (and not exactly of our kind), and Wakanda was all green screen. But the momentary pleasures count, too, still.

University of Oxford PhD researcher, and black historian, Jade Bentil, comments that, “The Wakandafication of the continent and Black diaspora identities is entirely uninspired. The repeated tropes/symbolic gestures that homogenise & essentialise thousands of African cultures in service of securing the terrain for Black capitalist possibilities & futures is tired.” Likewise, a tweet by Judicaelle Irakoze went that Beyoncé uses “…power and status […] to glorify Africanness rooted in power game[s] against the white gaze.”

Still, art, as everything else, has its own limitations. A 2020 Africa News article notes that, “Nevertheless, and despite features from notable African artists such as Nigeria’s Yemi Alade, South Africa’s Busiswa and Ghana’s Shatta Wale, some Africans are unimpressed by the American singer’s efforts, viewing her depiction of the continent as more imaginary and Wakanda-esque than based on the real and rich continental diversity that Africa holds. An image that could do more harm than good.”

The right question should be asked. The prominent inquest should be the possibility of addressing every culture in the mere four minutes of a song or two hours of a movie. Barring documentarian literatures, and this also has its limitations, interrogating the over 3000 unique cultures in the 54 countries in Africa is tasking the artist to an impossible mission. Then, the best bet, however exclusionary, is a reliance on a hyper-, “mother” culture, representative of all. It is only fair to distinguish the portrait of art from that of the society since the two exists on two separate planes. However, the truth remains that there is more to Africa than is shown in stereotypes.

Like Black Panther, the 2019 remake of The Lion King which Beyoncé stars and performs its theme music, only does its best to spotlight the vastness of a continent that can never be portrayed in a single stroke. In Beyoncé’s musical, too, Black is King, Beyoncé is largely praised for the cultural themes and the African Diasporic experiences she exhumes in the movie. However inexhaustive Beyoncé’s attempts are, what is important is that there is a story to tell, and there are people powerful and bold enough to carry this story.

In an article published on Variety titled “How Beyoncé’s ‘Black Is King’ Takes Her Embrace of Blackness to a New Level,” No Filter executive director, Moky Makura, is quoted to say that, “The challenge with a stereotype is that stereotypes are true; they’re not stereotypes because they aren’t true.” Makura goes on to say that, “The one thing I’ve been very clear about is that Beyoncé is not a journalist. She’s not reporting hard facts. She’s an artist. She’s a creative, so she’s putting together a creative vision of what she thinks the story is like, and that’s what you can see.”