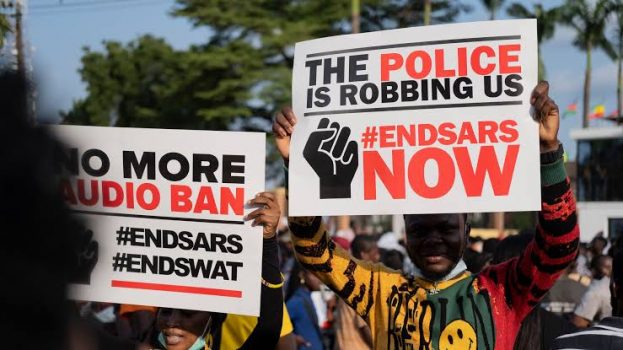 …when news began to surface once again, that this time, a young man was killed and his car taken away, that a young corps member was killed immediately after her service to the country, that a young defenseless musician was shot dead and his father was on National TV crying, Nigerians grieved differently…

By this time last year, after almost two weeks of angst-driven nationwide protest, Nigerians saw their fight against tyranny and police brutality come to a tragic end. The bravest show of human resistance that most Nigerians under 30 had seen came to an end, leaving in its wake an indelible trauma in the minds of Nigerians.

In the course of the protest, I had myself taken to the streets of both Asaba and Port Harcourt. I carried placards and banners, and I tweeted and made posts on my Facebook pages. I had long lost hope in the country, but the appeal and the aesthetics of this protest was simply irresistible. It reminded me of Albert Camus’ anecdote of a revolution which carries beauty. The protest was described as one of the very few struggles where Nigerians from every ethnicity fought, united. It was a protest that brewed slowly from the bottom before it manifested in the open. Years before, people had continually recounted their experiences on police brutality, and the hashtag #EndSARS had become a thing on Twitter. However, the protest had not taken place earlier because Nigeria always fought against protesting, and under President Buhari’s present regime, it had become commonplace to shoot at protesters. The protest had begun against all odds during the COVID-19 pandemic, after months of lockdown without palliatives from the government. Staying indoors for a full month had afforded, especially young Nigerians, a new kind of introspection. The fact that many people in populated cities were made to work from home enabled them preserve the energy they might have expended during their rush hours. So, when news began to surface once again, that this time, a young man was killed and his car taken away, that a young corps member was killed immediately after her service to the country, that a young defenseless musician was shot dead and his father was on National TV crying, Nigerians grieved differently.

When people took to the streets in Lagos, there was a ripple effect that spread towards young Nigerians in other major Nigerian cities—Benin, Ibadan, Port Harcourt, Makurdi, Enugu, Onitsha, etc., and as the days went by, the protest captured the attention of international media, even when the local media was not reporting the news as it ought to because they feared the government. The protesters’ initial demand was simple: that the government bring an end to its criminal Special Anti-Robbery Squad (SARS). The demand seemed simple enough. It turned out to not be. As the protest progressed, Nigerians were to come face to face with a much uglier monster than they thought they were up against. The predominant consensus was that SARS harassed innocent young people for regular benign practices such as owning iPhones, sporting dreadlocks, and driving flashy cars. The police often took them to secluded locations these suspects of Internet scam or Yahoo Yahoo, and extorted them, sometimes summarily executing them. A good number of front players in the protest, then, were friends and relatives of some of those killed by SARS without being convicted of any known crimes. The result of this demand was that the government soon announced that it was going to dissolve SARS. However, it refused to implicate even a single SARS official, neither did it relieve the Inspector-General of Police of his job. Instead, on October 11th 2020, the IGP announced the formation of the Special Weapon and Tactics (SWAT), touted as better trained than the former. The protesters were dissatisfied with this, and the protest continued, even molting new ideological skin. Soon, the protesters began to demand a full reformation of the police having found that the problem of police brutality was systemic, and nothing but a total overhaul of the system could do. On the 20th of October, in Lagos, the government sent armed and uniformed soldiers who pulled up in a truck at the Lekki toll gates and, in a gory turn of events, opened fire on the protesters. This shooting, from the nerve of the national protest in Lagos, brought an end to the countrywide protests.

Two facts stand out in the whole event: the government’s denial of any death at the Lekki toll gates; and secondly, the resistance of the Nigerian government to embark on the necessary reforms towards solving the problem of police brutality. In the first, we have an unreal situation; a morbid dystopia staring us. In the second, we are brought closer to a better understanding of the extent some of these problems facing Nigerians are deeply rooted in a system the government would rather uphold. It became clear that the brutality of the armed forces in Nigeria was in some ways upheld by the Nigerian government, and the over-centralised structure of government.

Immediately after the protests, some sanity returned to the country. For months afterwards, the reports of police harassments reduced. In Asaba and Awka where I spend most of my time, for the first time in a while, many young people were confident again to be outside sporting their dreadlocks again or holding their iPhones. The end of the protest might have been traumatic, the government might have tried like the dystopian government of Oceania in George Orwell’s 1984 to erase it, but its ripple effects remain. It has become a permanent scar. Even then, the Nigerians who had high hopes for the country, who believed in the country, and who saw the protest as the definitive beginning of a revolution had their hopes dashed by the abrupt end of the protest. The number of disillusioned Nigerians who have left the country in the past year is arguably the highest we have seen in the new age of social media. The government on the other hand, instead of seeing the protest as a call to action, to reform all of Nigeria’s underperforming institutions, saw the protest as an insurrection, with President Buhari coming on air to say that the protest was a political attempt to overthrow his government. He vowed to never again allow a protest of such magnitude occur in Nigeria.

It is a year today since the Lekki shootings. In that time, unlawful police violence has returned to full swing. Every time I head out from my house, I see the police interrogating young people driving cars. If these interrogations were because they were suspects, it would have been better, but in truth it is usually not the case. The police are only out, in most cases, to extort rather than to protect. Many young Nigerians who should have nothing to fear have resorted to giving them money to avoid wasting time and their own lives. In September while travelling from Rivers State down to the East, a group of uniformed armed men tagged, “JTF Special Forces” stopped our bus along the expressway leading to Omagwa and detained a young man who had an iPhone 11 pro, and by extension, delayed our journey for almost 30 minutes. At the end of the day, the young man was forced to give them money before they allowed us go. In some quarters, it is reported that SARS is back on the streets. The problem of police brutality is after all, not a thing of the past yet. It is unbelievably sad and disillusioning.

Today being the memorial of the Lekki toll gate massacre, young Nigerians, against all odds, and against the orders of the armed forces, have set different locations in different cities to commemorate those innocents who were killed that day. It is worse since none of these victims have gotten justice. Nigeria is an uglier country than most have thought it to be, and the corruption in the system is not a problem to the government, but an asset since the government is bound to make use of the armed forces to suppress the protesting citizens, as opposed to protecting them. The problem is not going away. There is no definitive strategy on how this generation hopes to combat the Nigerian problem on a general scale. The “End SARS” protest was a product of full-blown suppressed anger. Today’s memorial is a result of blind defiance to ensure that history is not rewritten by the tyrannical government, and those who walked this path with them and died on it are not written out of history. We remember.

Michael Chiedoziem Chukwudera is an editor and freelance writer. You can reach him on Chukwuderamichael@gmail.com or follow him @ChukwuderaEdozi on Twitter.