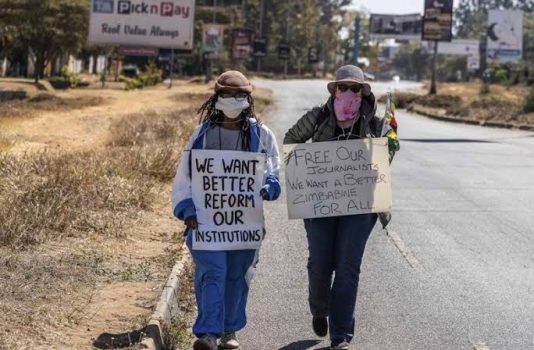 Dangarembga and Barnes Get Fine and Suspended Sentence for 2020 Arrest

After two years in court, Dangarembga and Barnes were found guilty and fined a sum of 70,000 Zimbabwe dollars and a suspended sentence.

Zimbabwean novelist, Tsitsi Dangarembga, and Julie Barnes have been given a six-month suspended sentence and a fine after a Harare Court found them guilty in 2020 of “inciting public violence” during an anti-government protest.

Dangarembga and her colleague, Barnes, were arrested in July 2020 during a protest after they marched in the empty streets of Harare, holding a banner that read ‘We want better – reform our institutions’ before they were bundled into a police van. The novelist was freed on bail a day later.

After two years in court, Dangarembga and Barnes were found guilty and fined a sum of 70,000 Zimbabwe dollars and a suspended sentence, as long as they do not commit any such offences in the next five years.

Dangerembga who is a public critic of President Emmerson Mnangagwa’s government has advocated that Zimbabweans have the right to protest. On the ruling, she noted that she is “not surprised.” 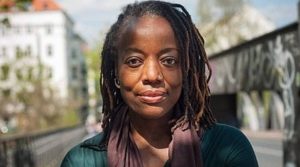 Dangarembga and Barnes released a statement after the conviction saying:

“Dear Friends in Zimbabwe and everywhere in the world, dearest family and relatives, it is with heavy hearts that we bring you news of our conviction for the charge of ‘attending a meeting with intent to incite public violence, breach of the peace or acts of bigotry,’ as a result of exercising our constitutional rights as Zimbabwean citizens to freedom of expression, and to demonstrate or protest or petition the government peacefully, which we did on 31 July 2020 by walking down Borrowdale Road displaying posters.”

“The first poster called for a better life for Zimbabweans and institutional reform in our country. The second poster called for the release of those who had exposed corruption in government in the media, and others who had encouraged citizens to protest, who had been imprisoned without bail and without trial. Tsitsi Dangarembga carried these two posters. The third poster, Julie’s, also requested freedom for journalists who had been arrested and imprisoned without bail or trial, and also called for a better Zimbabwe for all.”

(Read also: The Ruler VS The Ruled: Is Free Speech Politicised Against Marginalised Groups?)

“Our hearts are heavy at this outcome, because this conviction could set the precedent that a Zimbabwean – indeed a person in Zimbabwe – is not free to walk down a road with another citizen displaying peaceful messages that convey their opinions on issues that affect them as people living in this country. We must no longer joke that there is freedom of expression in Zimbabwe, but no freedom after expression.”

“We must take this conviction as a warning sign that our freedom peacefully to express what we want as Zimbabweans in public discourse is being stripped away from us. We are being intimidated into silence and inaction as repression and corruption increase, and the quality of our lives, our hopes for our children’s lives and our children’s confidence in their futures decreases.”

“Freedom, justice and a dignified life are our right as Zimbabwean inhabitants of our planet. We urge you all to stand peacefully for freedom, justice and dignity in our country at all times. We promise you that we will always do the same. We intend to appeal. God bless Zimbabwe, and God bless us all.”

Tsitsi Dangarembga is a playwright,  filmmaker and the award-winning author of the Booker Prize-longlisted novel, This Mournable Body (2018), as well as Nervous Conditions (1988), and The Book of Not (2006). Her debut novel, Nervous Conditions , was the first to be published in English by a Black woman from Zimbabwe, was named by the BBC in 2018 as one of the top 100 books that have shaped the world.