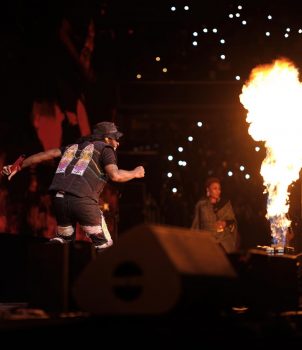 “Na God Go Punish Una!” Concert Culture in Nigeria is a Slippery Slope for the Progress of Nigerian Entertainment

…back at the home front, the concert culture is rather deplorable, even as ticket sales for these event shows bag high price tags. One can only wonder whether audiences in Africa do not deserve the best, but rather, what they are given…

Out in the cold on New Year’s Day, a teeming crowd spanning into hundreds gathers at Wonderland, Lagos. The harmattan wind has them contemplating their decisions as they wait, as time stretches – over eight hours long – for the “African Giant,” Burna Boy, to perform at his “Lagos Love Damini” concert. The outcome: Burna Boy bursting slurs at this crowd before proceeding, as if by compulsion, to give about an hour-long rendition of his hit songs, for a show that should have lasted six hours. The tongue-lashing, which ended with “na God go punish una,” (God will punish you all) may have come off as a surprise to the crowd, but an artiste arriving late for his live concert and performing shorter than the stipulated time has become an inescapable occurrence to expect from shows in Nigeria, evidence of a crumpling, problematic concert culture in the country.

When concerts organised in Nigeria for Nigerians are placed side by side with performances and events abroad, concerts in Nigeria wane by a far margin. Without a doubt, the success of Afrobeats music, and by large, the Nigerian and African music industry, has become insurmountable. Far gone are the days when Nigerians take pride in their distaste for African music. Today, African sounds have taken the music industry by an unprecedented storm, amassing local and international audiences. Nigerian artistes, too, have taken advantage of the global success and tapped into organising international concert shows and live performances.

At first, we marvelled at Nigerian artistes having internationally sold-out shows, an audience of foreign faces singing along and cheering as these artistes performed. The crowd was awed by the performance of Fireboy DML at the 2022 BET Awards show. In 2021, Wizkid performed his three-day Made in Lagos concert to a sold-out crowd at the London O2 Arena. In April 2022, Burna Boy became the first, and, at present, the only African to have a sold-out concert at the Madison Square Garden in New York City, where, together with his band, The Outsiders, he performed mesmerisingly for over three hours long. Today, it is simply another day in show business.  Aside from live concerts streaming in the revenues, the fanbase can immerse itself into the brand or image that these artistes project, as if becoming a part of a cultural movement.

But, despite the international success and acclaim, back at the home front, the concert culture is rather deplorable, even as ticket sales for these event shows bag high price tags. One can only wonder whether audiences in Africa do not deserve the best, but rather, what they are given.

Many Hurdles in Performance Events in Nigeria

The problems with concert events in Nigeria run aplenty. From experience, lapses range from artistes showing up late to their events, performing for a short time, and artistes lip-syncing while the song plays in the background. I live in a small town where local events are put together every once in a while for up-and-coming artistes, but in all of these shows that I have attended, these artistes barely sing their songs. They rather lip-sync while the song plays. Artistes may also have angry outbursts on stage, or refuse to perform altogether. Take for instance, Burna Boy kicking an enthusiastic fan trying to get on stage during his performance, or how in 2019, he ordered that a fan be escorted out from the audience, claiming they gave him bad vibes. We need only have to look back a few weeks ago during the festive period that had lineups for events, and reflect on the subpar outcome some turned out to be.

The quality of production may also be affected, with concert shows experiencing technical difficulties, whether it is the lighting, sound engineering, or stage set. Burna Boy, after issuing an apology for the incident at the “Lagos Love Damini” concert, cited poor infrastructure and organisational structure as causes of the mishaps and tension that flared up and about. “Lagos, I love you but I can’t do this again. The organisational structure and infrastructure are not there for the complexities of my audio and production needs,” the statement said. Of course, it takes a lot of planning and resources to put a good show together, one that requires a lot of infrastructure and manpower that appears to be inadequate in Nigerian entertainment. There is a dearth of concert venues and insufficient equipment required to put an event together. There are also the logistics, communication, and feedback that have to be put in place, and of course, the safety of attendees. Following the encounter at the “Lagos Love Damini” concert, Nigerian socialite, Debola Daniel, bemoaned the lack of accessibility for people with disabilities at concert events.

There has also been a lament on the lack of partnerships and sponsorship by show promoters in the country. But worst still is the laissez-faire disposition of these artistes during show lineups that appear to have become a habit or something to be expected.

Interestingly, in 2018, Burna Boy showed up seven hours late to his show at the Eko Convention Centre in Lagos. In 2021, singer and songwriter, Simi, also showed up hours late to her “Can You Simi Now” concert. Sometimes these seemingly relaxed behaviours from artistes spill out and further from the shore of Nigeria. Fans of Wizkid in Ghana were left disappointed when the superstar did not show up for his “Wizkid Live Concert,” even after confirming on Twitter that he would. In August 2022, Kizz Daniel was arrested in Tanzania for breaching his contract to perform at his “Afro Classic World Tour” in the country. Asake, who had a good run with his music in the past year, showed up to his “Mr Money with the Vibe” concert at the Forum Birmingham in the UK, hours late and was (rightfully) booed by the crowd.

Is a Lack of Planning a Reflection of Us?

Expectedly, there is a certain level of arrogance that comes with fame and success. Call it hubris, it is usually the malady of the rich and famous. Notwithstanding,  entertainers need to be held accountable when their performances pale in comparison to what is or can be obtainable elsewhere. As a society, we constantly decry the lack of accountability on several fronts; in governance, policy-making, security, the education system, and what have you. It becomes dreary when this lack of accountability pervades the ways we choose to keep ourselves entertained.

It is, yet again, the “African time” cultural ideology of laxity concerning time management that is pervasive in Africa that has permeated also into the entertainment industry. The show organisers lag when putting an event together, the performing acts do the same, and somehow, the audience or concertgoers expect this. This, in turn, further drags the timeframe of the event and further dampens the whole concert experience. The average person attending any event or function in Nigeria anticipates that an event would not commence at the slated time.

The Nigerian music industry, and largely, Afrobeats music continues to grow, with more feats to be conquered, and it is possible to attain the pinnacle also when it comes to organising concerts and shows. Concert shows are an entire experience on their own, for both performers and attendees, there have also been successful events and live performances put together to acclaimed success, such as the annual Gidi Culture Festival and the gospel concert, The Experience, in Lagos. Perhaps someday, it would be possible to compare a concert organised in Nigeria or any African country to the festive aura that follows performances from other Black celebrities like Beyonce, Travis Scott, and Kendrick Lamar. There is a lot of room for improvement when it comes to the concert culture of Nigerian artistes and event organisers, from having better infrastructure for concert shows to setting up better policies to address these shortcomings and having more promoters and sponsors willing to headline concert events.

As digital technology improves, fans would likely stick to virtual concerts, or at best, listeners confine their followership to online music streaming platforms and other online fora including social media platforms with options for live streaming. However, as a people so used to taking most things at face value and who have adopted the culture of “take it as you see it,” it is more likely that the past will be forgiven and forgotten, and in a few months, fans will, again, gather to watch their faves perform, only to be disappointed by poor performance. In the end, the artiste would issue a convincing apology for the setback, which would suffice to pacify the displeased public.