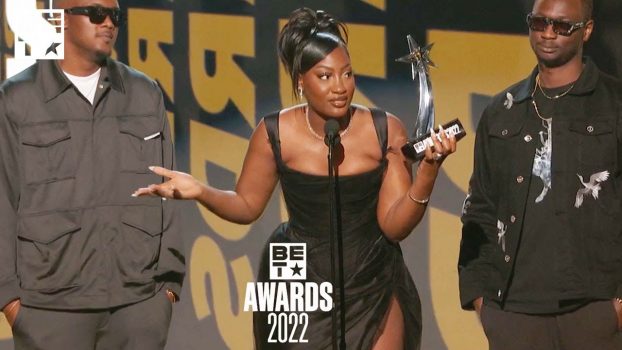 Barely eight months into 2022, Afrobeats continues to rise to global dominance. There will be much more to unpack by the end of the year.

Recently, music label executive, Don Jazzy, spoke out in a tweet on the thriving state of Afrobeats as a music genre and progressive culture. While the celebrated Nigerian music icon seemed to speak for himself, in reality, he uttered the thoughts of most Nigerians at home and Afrobeats supporters in the African Diaspora who have witnessed the numerous feats these Afrobeats megastars and up-and-coming artistes have achieved and continue to. For this list, I looked at events, recognitions, performances, and releases from January 1st to June 30th 2022 that have lifted Afrobeats to greater heights. These are moments we couldn’t be any prouder of our artists. The rest of the world, too, is watching.

Although the YBNL signee became a household name after his debut album, Laughter, Tears and Goosebumps, and the follow-up, APOLLO, his summer smash single, “Peru” and the remixes that featured English singer-songwriter Ed Sheeran and renowned Atlanta MC, 21Savage, took him to a higher class of music stardom, enabling him record a song with living legend, Madonna. All of these were the stepping stones to what would lead to the most significant moment for a blossoming career yet. Being the first ever Nigerian artiste to perform on the BET stage scored bragging points for all the right reasons. First was the eclectic performance of “Peru” and “Playboy,” two songs from his third studio album, Playboy. The performance was another confirmation that Afrobeats had sealed its undeniable relevance in the African-American culture in the US.

As if Fireboy DML’s performance was not enough spotlight on Nigeria and Afrobeats, Tems’ sweep on black culture’s biggest night could not be more wholesome. With beauty and poise, the 26-year-old singer graced the stage to accept two awards—one for Song of the Year, and the other for the Best International Act category. The “Try Me” singer also became the first female Nigerian artiste to win the latter category after a male-dominated run which included 2Baba, DBanj, Ice Prince, Wizkid, Davido, and Burna Boy. Her inspiring acceptance speech not only reminded the 3 million viewers of the event that dreams come true but opened doors that had been closed to many Nigerian female artistes for far too long.

Since Burna Boy’s third studio album, Outside, which included one of Afrobeats biggest songs, “Ye,” the music world began refocusing its attention on Nigeria back in 2018. Burna Boy’s fierce run has exported Nigerian culture across the globe, highlighted the need for PanAfricanist activism, and allegedly created a novel sound, afro-fusion, a sub-genre of Afrobeats, in the process.

After an eventful award ceremony that housed the biggest names in this generation, Burna Boy closed the night with the performance of “Last Last” from the Love Damini album. His rendition triggered an enthusiastic reaction from the celebrity crowd, and nailed two points. One, Love Damini is another classic to join Afrobeats’ catalogue. Two, African music needs no further appeal to seal its global praise.

In May, American HipHop/Rap star, Future, dropped his sixth studio album, I Never Liked You. 22 titles in a lengthy one-hour plus album, but no track stood out as much as “WAIT FOR U” featuring Drake and Tems. What made the track extra superb, aside from being a sample from Tems’ desk performance, was her enchanting vocals that echoed throughout the song’s playtime. A collaboration between rap music’s renowned duo and Tems proved to be magical. It was a sonorous melody that warmed the hardest of hearts and climbed to the tippy top of visibility on the Billboard Hot 100.

Coming just a few months after his epic three-day O2 Arena concert in London, from Hype Fest to Rotterdam, Wizkid has proudly waved the Nigerian flag across continents. His latest is the Lost in Riddim Afrobeats Festival, initially set to hold in San Jose, California, before being cancelled due to uncontrollable circumstances. In all honesty, if we choose to track how many venues the Made in Lagos merchant is selling out, even non-members of Wizkid FC would be proud of one of their own.

Being the first Ghanaian artiste to have a number one song on Apple music Nigeria Top 100  is no small feat, but the 20-year-old’s smashing single, “Kwaku the Traveller,” soared across Nigerian airplay and charts like a walk in the park. Its addictive hook, delivery, and iconic phrase, “who never fork up hands in the air,” that became a viral meme were just enough to make the record a crowd pleaser in Ghana and Nigeria. Amidst both countries’ sibling rivalry in everything from Jollof rice to football that has been on for ages, both parties finally agreed on one thing: “Kwaku the Traveller” was a record that deserved the highest praise. In the international scene, “Kwaku the Traveller” was featured on Apple Music’s Rap today, staying on number one above names like Lil Baby and Lil Durk, to name a few. Black Sheriff’s recent success dismantled Ghanaian rapper, Shatta Wale’s argument in a rant that Nigerians gate keep African music. The amount of support the song still receives today proves that good music is accepted in Nigeria regardless of the language or ethnicity of the artiste behind the track.

Nigerian emo-Afrobeats singer, CKay, was always in the news for the right reasons. The singer who suddenly came under the full glare of the world in 2021 with “Love Nwantiti” from his CKay the First EP was the subject of discussion on the Internet, especially on TikTok, after being trolled previously as a one-hit-wonder. Here are a few of his milestones:

Every four years, the FIFA world cup takes place, and every four years, we get a unique song that encapsulates the theme of the globally-anticipated football tournament. Whether it’s the 2010’s “Wavin’ Flag” or Shakira’s rendition of “Waka Waka,” every World Cup season leaves football, and non-football fans with a melody stuck in their minds. For this year’s tournament, Davido, Aisha, and Trinidad Cardona were enlisted to create a theme song to communicate the importance of global unity, a celebration of diversity, and the beauty of football. Upon its release, “Hayya Hayya (Better Together)” went on to amass 15 million views months before November’s opening ceremony in Qatar, Dubai. Being the first Nigerian artiste to be granted this honour, Davido posted his thoughts on Instagram.

Mavin Records has been known for joint releases that were generally well-received in the first ten years since 2000. After taking a brief hiatus since its 2019 “All is in order” song, the label returned to its in-house collaborative culture with the release of the sultry love anthem, “Overdose” featuring its new breed of musical talents in Magixx, Ayra Starr, Boy Spyce, Ladipoe, and Crayon. The single was a clear chart-topper that stressed the progressive role of in-house label artistes’ collaborations in the success of Afrobeats.

Arguably one of the biggest nights in music history, with his two-hour live performance before a 20,700+ capacity at Madison Square Garden, Burna Boy became the first Nigerian artiste to tread the paths of music legends such as Elvis Presley, Michael Jackson, Adele, John Lennon, the Rolling Stones, Bob Dylan, Madonna, Elton John, Stevie Wonder, The Who, U2, Bruce Springsteen, Katy Perry, Taylor Swift and many more who have graced New York’s iconic venue with their musical prowess. Publications and notable figures described his performance as “phenomenal.”

Ayo Shonaiya’s Netflix documentary, Afrobeat: The Backstory, highlighted significant events in the late 90s and early 2000s that were the foundational blocks of the global boom Afrobeats enjoyed in the 2010s into the 2020s. In the future, these significant events we have seen in just the first half of 2022 will not be missed in a forthcoming documentary by anyone observant enough to take notes. What has been your favourite moment so far this year?

Israel Olorunnisola is a freelance creative. When he is not writing about Film, Music, TV or Pop culture he is telling stories on Wattpad.