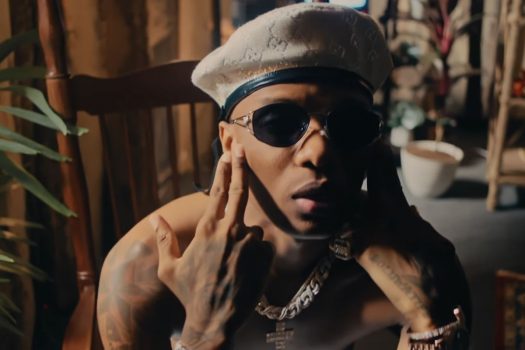 WIZKID LAZILY REFLECTS ON WINE AND SEX IN “MADE IN LAGOS”

Wizkid, from an artistic perspective, has nothing to prove to anyone.

You could tell that he had the potential for greatness when he crooned “if you don’t talk money/omo don’t show up” on MI Abaga’s 2008 sleeper hit “Fast Money, Fast Cars”, but by the time Ayodeji Ibrahim Balogun was riding roller-skates in 2010’s “Holla At Your Boy”, you knew that you were listening to the vocals of a future world-beater. Indeed, it’s been ten years since he name-dropped the bad guys and other guys he knows while surrounded by ladies in costume masks and sampling Chaka Demus on “Tease Me”. Since then, he has amassed a cult following (there’s a reason they are called Wizkid FC), pulled some of the biggest figures by an African in music streaming history, fathered three children, floated his own record label, landed some major endorsement deals, and earned a Grammy nomination.

However, there are those who feel that the best years of his career are behind him, and that he currently thrives on star power rather than artistry. These people argue that his current material lacks the hunger of “Don’t Dull”, the verve of “Caro”or the spirituality of “Öjuelegba”. There have also been frequent comparisons to the other young thriving Nigerian hitmaking machine, yea, the one who emphasises on rising by lifting others, the one whose vocals have been much-maligned but whose music has equally lit up the charts.

It is for this reason that Made In Lagos was necessary. Wizkid had not released a full-length project in three years, and to be honest the last record, Sounds From The Other Side, only managed to resonate with a relatively small audience. After much anticipation, multiple postponements and a delay which had almost begun to create as much furore as the Second Coming, Wizkid’s fourth studio album premiered in the early hours of October 30, 2020. With a listening time of 52 minutes, it is executively produced by P2J, with Kel P, Blaqjerzee, London, Sarz, Juls and Mut4y also contributing to the sound dynamics.

Things get off to a flyer with “Reckless”, where Wizkid muses on triumphing over adversaries in the lines of “I know say them dey pray on my downfall/I’m still a winner/won’t let them play on my banjo…I no dey give a man more than what he deserves/them still dey bite the hand wey dey feed them”. It’s mid-tempo, with percussions holding sway, making for a strong curtain-raiser.

“Ginger” sees him get help from fellow high-flyer and Grammy nominee Burna Boy. Sensual and once again percussion-laden, it’s a collaboration involving two of the industry’s “big three”, and thankfully it delivers, both stars managing not to overrun each other. “Longtime” has Nigerian-British rapper Skepta hand in a decent verse with the lyrics “she said she’s living life like a movie/I said ‘come and teach me’, you know I’ve got the school fees/ready or not, man with the Fugees“, with a rhythm that is reminiscent of their 2018 summer collaboration “Bad Energy”.

“Mighty Wine” is deliberate with the emotions it intends to evoke, and by the time we get to this track, the tempo has significantly slowed down, even if that does not necessarily translate to a drop in pace. The image conjured is that of a lady dancing seductively in a room with dim lighting, something that a Jane Mena or a Korra Obidi could (and maybe would) move to. There is an unwritten theory which suggests that the presence of Damien Marley on a record elevates it sonically, and accordingly he lays his hand (and his voice) on “Blessed”, a track that has Wizkid reflecting on his career trajectory and yearning to hold a wine glass in one hand with a lady in the other.

“Smile” sees the record move thematically from Lust to Love, with sonics that nod to 2000s Sean Paul and vocal input from H.E.R, who is easily one of the best things about U.S R n’ B right now. In what is the strongest duet on this body of work, Wizkid puts his falsetto to use in “Pieces Of Me” as another R n’ B sweetheart, Ella Mai croons “come and get it” over acoustics.

If there is one song that defines the entire tone of the album as well as Wizkid’s current artistic direction, it is “No Stress”, where the 31-year-old swoons over a woman who is financially comfortable but is clearly enchanted by him. Here, he samples Amerie’s “One Thing” amidst lyrics that make this the most sexually explicit track on the LP.

Alternative act Tay Iwar gives a very good account of himself as he screams “your love keeps me warm” on the Juls-produced “True Love”, where drums and sax combine to create mental pictures of a slow dance by the beachside. “Sweet One” is subtly intense, with more sax and more reassurance of affection. The energy switches up once more with “Essence”, where Tems shows why she’s currently adored by Nigerian music enthusiasts as she chronicles the physical allure of a love interest.

“Roma” is fast-paced, and while it feels like something 2face could jump on, it is Terri who provides some assistance on this one. The London-produced “Gyrate” is an ode to wine and marijuana, and the curtain falls with “Grace”, which dwells on living free of strife.

There is not much writing going on, but sometimes it is the instrumentation, rather than the words that tell the story: music transcends penmanship, and there are moments when the message to be passed is more succinctly conveyed by drumsticks, guitars, saxophones, violins and harmonicas. The lyrics are repetitive, but the sonics come to the rescue, and the transition that plays out across each track, helps for better narrative cohesion.

More than a few people would argue that the tenor of the album does not capture the essence of the city after which it is named. Their assertion bears some validity, but they forget, though, that Lagos is just as hedonistic as it is gritty, and that the mellow lounges are as relevant as the loud nightclubs to the city’s aesthetics. This LP is as “Lagos-esque” as it gets, providing the sort of playlist that would find home in intimate venues at Victoria Island, strip clubs at Surulere, and cold bedrooms at Ajah. Wine, music, and sex are what define Lagos.

Wizkid is comfortable here, making music at his own pace while making up for the alienation that occurred with the last album. He is not too concerned about making hits right now, and he has earned the liberty to do that. However, it’s hard not to feel that he’s a little complacent. There is a lot of good music to go round these days, and there is the need to maintain a certain quality to avoid losing the attention of audiences: if Omah Lay provides the same (if not better) artistic flavour as you, then the fans need stronger reasons to listen to what you are offering. Wizkid hasn’t fallen off, but there is something missing from this project, that thing that separates “very good” from “excellent”.

Ultimately, Made In Lagos is better than it gets credit for, and while Wizkid appears to be “lazy” now, he proves that he can still make good music. This album will not (and should not) feature prominently in those heated Album of the Year conversations, but he would not be bothered too much, quite frankly; he’s in Jaiye Jaiye mode.