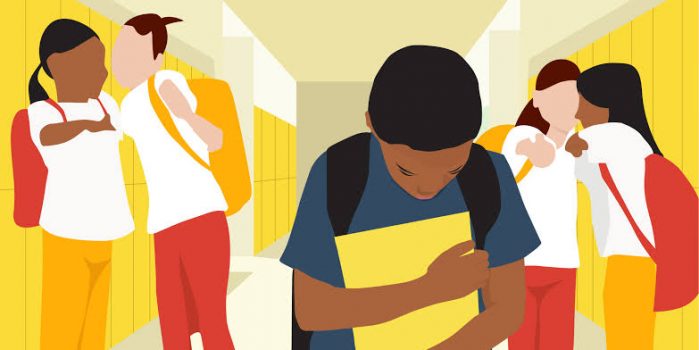 Bullying in Schools; Why Cases Are Largely Unreported in Private Secondary Schools

Bullying in schools is becoming prevalent in the society that it has become normalised. Many persons, especially attendees of boarding schools expect and accept harsh treatments…

On Wednesday, 28th November, 2021, Sylvester Oromoni, a 12-year boy in JSS 2 at Dowen College, Lekki, Lagos died after sustaining multiple injuries. Sylvester was a boarding student at the school.

This is my 12 years old cousin that was beaten to death at a school that cost over 1 million naira. pic.twitter.com/TZ5XGMrwgg

The family of Sylvester alleged that he was bullied and beaten for refusing to join a cult gang, while surfacing a video of the boy some hours before he passed away, obviously in excruciating pains, his mouth bloodied and bruised.

The school’s management however claimed that the boy sustained the injuries from playing football on the school field.

This incident since gathered a lot of public attention from government officials, activists and celebrities alike with the hashtag #justiceforsylvester trending on social media.

Sylvester Oromoni (Jnr), a Junior Secondary School two pupil at Dowen College, Lekki, Lagos, would have clocked at 12 today. But he was allegedly physically abused in the school. He died yesterday 3 December 2021 from complications of the abuse. #Justiceforsylvester pic.twitter.com/KldTr9Ozc6

With over 180,000 signing a petition to demand justice for the late Sylvester and for the perpetrators prosecuted. The school has been shut down by the Lagos state government pending ongoing investigations.

In January 2021, 11-year-old Don Davis was allegedly molested by senior school boys at the Deeper Life High School in Akwa-Ibom. The school’s principal and housemaster involved were arrested, while the culprit school boys still face a juvenile court.

Bullying is an unwarranted behavior intended to intimidate or dominate others (a weaker person) with the use of force or violence. Although common among school children, there has also been cases of teachers bullying children as well.

For a behaviour to be considered as bullying, it must be aggressive and repetitive. There also has to be an imbalance of power such as one party having physical strength or authority over the other, being more popular, having affluence or have an access to a humiliating information about the other.

Bullying could also be verbal; which involves threatening, ribbing and name-calling. It could take the form of social bullying such as humiliating the victim in public, like how musician, Tiwa Savage, was bullied to pay to not have her sex tape released to the public or telling others to not associate with them. It could get physical and involve hitting, shoving, kicking, and sometimes, sexual assault.

Another form of bullying that has become increasingly common is cyberbullying. With over 80% of teenagers using cellular devices actively, about 10-20% experience this form of bullying, with boys more likely to be victims than girls, regardless of race or background. It involves the use of digital devices such as social media and texting platforms to spread lies, hurt, impersonate or embarrass another person.

Bullying in schools is becoming prevalent in the society that it has become normalised. Many persons, especially attendees of boarding schools expect and accept harsh treatments in primary and secondary schools as a common rite of passage.

To address the the issue of bullying in Nigerian boarding schools, we must first acknowledge how the student hierarchy between ‘Seniors’ and ‘Juniors’ has created an environment where teachers allow older kids to ‘discipline’ younger kids as they please.#Justiceforsylvester

This is sickening. This issue of bullying transcends all boarding schools in Nigeria, they say it's like a "right of passage" but it's simply bullying. A law should be made to serve punitive measures to parents of bullies.
This rubbish must stop.

“My seniors did this to me, I must inflict it on my juniors too” regardless of how justified.

Cases of unimaginable punishments meted out by seniors to new students: extortion, hitting, flogging, sexual harassment and sexual assault. These experiences have lasting effect on both the attacker and victim. While attackers may carry on to more act of social vices like cultism, victims may grow to become bullies themselves or become withdrawn socially, or see a drop in their academic performance. Bullied children may have challenges with self-esteem as they grow into adults.

On the surface, it would appear as though private secondary schools have lesser cases of bullying in comparison to government, public, or community schools, speculating that private schools have a more controlled environment that should prevent bullying from occurring, with supposedly better qualified teachers and access to more resources than public schools. A study in Australia reported that 22% of parents complained of bullying occurrence in public schools, which was 7% more of such complaints in Catholic schools and 10% higher in other private schools. This report was however misrepresented as most of the private and mission schools within the Australian research demographic were unwilling to take part in the survey.

Besides that, while the government schools in Australia have more diversity in student population, private schools have a rather narrow selection criteria to enrollment of students, a primary factor being family income level. There are also fewer statistics to how bullying is addressed both in government and private secondary schools.

A report in the U.S showed no significant difference of bullying occurrence in government and private owned schools. Differences existed in the location where bullying occurred, with private schools attesting that bullying incidence occurred in classrooms and playground where there is no adult supervision. In Nigeria, studies showed that bullying occurrences were common to boys as bullies and victims than girls, with the incidence taking place more often in the classroom in government schools than in private schools.

Only a few cases of bullying in schools get addressed, as several instances go unreported and uninvestigated. Most times, incidences only get investigated rather too late, when the reports have gone public through the Internet.

If the inclination to bullying happening in public and private and mission schools is negligible, why are cases of bullying poorly handled and almost never visibly addressed despite already laid down measures by the management to combat such when they happen in private schools?

First, the management may try to underplay the extent of damage caused, excusing them as students’ excesses. To uphold the seemingly good reputation of the school, especially for schools that claim to be upright and “God-fearing,” school management delay in communicating cases of abuse to parents for fear of parents withdrawing their wards from their learning institutions.

To further buttress this point, the cost of enrolling a child in private secondary schools can rise to as high as five million naira depending on a lot of factors including location in a municipality. A private school that runs as a business entity cannot afford to lose a paying customer (parent or guardian) and as such, would decline to bring scandalous reports to public hearings.

Parents are primary caregivers for their children, and the home ideally should be the first institution of learning. Regrettably, many parents completely fall out in this responsibility. Discipline is rarely enforced in schools, as most parents are opposed to schools taking disciplinary actions against their children. Private schools have formed elitist systems characterised by negligent parents, parents who are abusers, too, and those who are over-indulgent. When cases of children misbehaviour are reported, parent treat them with levity, even when these children perpetrate such actions as a cry for attention.

Outside of their homes, through their words and actions, children reflect the kind of environment they are raised in. Parents that are overly strict or extremely overindulgent towards their kids tend to raise kids that are bullies.

An example of parents’ overindulgence is the case of Ethan Crumbley, a schoolboy in the U.S who allegedly shot and killed four of his classmates with a gun his parents was alleged to have bought for him for his birthday. Prior to the shooting, Ethan’s mother texted him to “learn not to get caught” when she was initially notified that her son possessed a fire-arm.

Private school teachers of these elite schools have oftentimes complained of how they, too, face harassment from school children. They blame this on soft and a lenient school management where criticism of students is discouraged.

Listening to the tales of an Abuja teacher in one of these rich schools.

Teachers have also been subject of students’ taunt on the teachers’ physical appearance, general disposition and in some cases, they have been victims of sexual harassment.

Bullying is neither new nor restricted to school children, even adult work organisations experience obvious and subtle forms of bullying.

However, clearer implementable policies against bullying need to be enforced, and parents being primary care givers, must take more active rolls in their children’s welfare.

Sybil Fekurumoh is a freelance writer from Bayelsa. She enjoys writing poetry and volunteering for programs that promote children education and wellbeing. Connect with her on Twitter and Instagram @toqueensaber