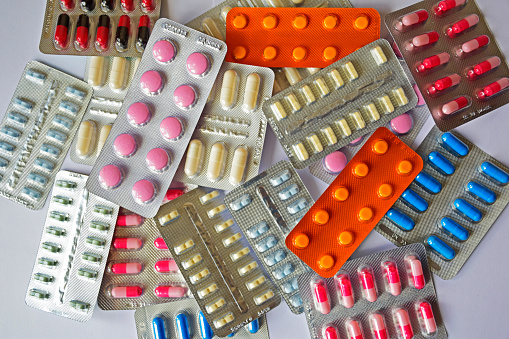 From Alomo Bitters to Kayan Mata; How Africa’s Sex Stimulant Industry is Booming

One would think that as conservative as Africans appear to be, sex and its related matters would be excluded from their active vocabularies and knowledge, or at the most, reserved for only nuptial beds. Yet, at the turn of every corner is a sensual picture, a lewd remark, an advertisement for products that enhance sexual performance, a cleanser that promises to boost sex drive, a potent cure for STDs, sex toys, and a variety of other sex accoutrements. Recently even, news carried the story of the sundry of fake aphrodisiacs smuggled into the border towns of Katsina State, Nigeria. The sex products, confiscated by the Nigerian Customs Service, were said to be worth over six million naira.

Synthesised “prosexual” products such as Viagra gained wider acceptance in the turn of the 21st century. Cow’s trotters referred to as mazondo by the Shona people of Zimbabwe is commonly consumed by its adult male population as it is believed to be an aphrodisiac. The price of a cow’s trotter ranges between $2 to $2.50.

The disposition of Africans to sex is tied to religious and cultural sentiments, and issues like sex and sexuality are not always openly discussed. Predominant religions such as Christianity and Islam in African communities believe in circumspection, and the avoidance of sexual activities for unmarried people, as sex outside marriage is regarded as sinful. And although in Africa, public display of affection is usually looked upon with contempt, the sex industry thrives. Sex products have become a niche, and they have grown to become a very lucrative industry.

The local market offers a motley of both water- and alcohol-based herbal mixtures, to boost sexual desire in men. These small shops are conspicuously located at roadsides, market places, motor parks, etc. Some are driven in mobile vans, or hawked on the streets by traders.

Barring African societal choices on sex, the thriving marketplace for sex stimulants in Africa could be as a result of the long-held cultural norm held by men to assert their masculinity. In Nigeria and Ghana where the masculine identity is associated with sexual prowess, sex products promise cure for the “one minute man” problem by boosting sexual stamina, healing erectile dysfunction, to “teach your woman a lesson,” (probably from being mocked by a sexual partner for being an under-performer), in addition to cleansing the system and curing sexually transmitted diseases like gonorrhea.

These stimulants are given funny-sounding brand names such as Alomo Bitters, Oga Nla, Kerewa, Mokole, Ogidiga, Erujeje, Baby Oku, Burantashi, Long Journey, Commando, etc., possibly as a business ploy to command better patronage. The average price for a 20cl bottle of the liquid in Nigeria could go between 49 cents to a dollar. Mass patronage creates a goldmine for the manufacturers. In 2018, the total units of Alomo Bitters sold in Nigeria alone amounted to over 13 million bottles for varying prices between 150 to 850 naira. Interestingly, Alomo Bitters is consumed across other African countries like Togo, Ivory Coast, and South Africa.

Although the efficacy of these sex products is medically questionable, some studies suggest that usage of them may be harmful to the body, and many of them may be adulterated or contaminated. It is however conclusive to say that sex sells profitably from the high demands for sex stimulants.

The use of aphrodisiacs is not exclusive to men alone. Even as the African society dictates the repression of women’s sexuality, the usage of aphrodisiac is still rampant amongst women. While men command authority in African settings, they acknowledge, usually demeaningly, the woman’s “bottom power,” her use of her sexuality as a bargaining tool. This leads to an increased use of sex stimulants by women to satisfy their men.

These products are touted to tighten and “sweeten” the vagina, as well as enhance vaginal lubrication, thus amplifying the sexual experience. In northern Nigeria, Kayan Mata is a popular sex stimulant for women. Translated to mean “women things,” Kayan Mata is a herbal aphrodisiac originally intended for intending brides. The male variant, Kayan Maza, is not as commonly sought after.

One school of thought suggests that due to the common practice of polygamy in this region, the women vie for their husbands’ affection through the giving of sexual pleasure, hence the use of Kayan Mata. The price of this product varies from affordable rates of 1,000, 10,000 naira, to costing a small fortune of about 50,000 naira.

The business of Kayan Mata has now challenged the public image of sex and sexual relationships, and now courts patronage from unmarried women as well. The proliferation of the Internet has made the demand for sexual products more mainstream, as consumption has evolved to digital sales, and online branding channels are being welcomed.

Hauwa Saidu Mohammed, owner of Jaaruma Empire Limited, and popularly known as Jaruma, makes a fortune as a sex therapist and from her leading online sales of aphrodisiacs, gathering over a million followers on Instagram, and offering such products as Silky Kola, Magic Tea, Love Sex Chocolates, and other special packages costing over 500,000 naira. “Like My Mamalawo” packages cost about 50,000 naira. Although the Jaaruma brand is said to be controversial, as many perceive her products to be diabolic, her business breaks cultural and religious taboos around sex, especially for women from northern Nigeria.

Another vendor that has capitalised as an online vendor to offer sex-enhancing products and services is Omoshola’s_Place. Gathering a followership of over 600,000 on Instagram, their products range from 150,000 to 500,000 naira.

The industry for sex stimulants may be openly criticised, but the niche still stands unabated. For one, as many Africans would choose secrecy over open conversations on sexuality, the authenticity of these products cannot be contested as patrons may not openly admit to using them. Marketers elude the burden of proof on the basis that since users can hardly publicise the effectiveness or not of their products, there is no denial of its legitimacy.

Therefore, the African sex products market churns out goods, and amasses its wealth from the vulnerability of its users, and on their silence and non-disclosure.