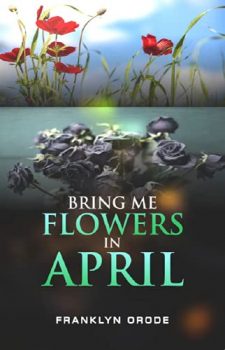 A Review of Orode’s “Bring Me Flowers in April”

Franklyn, in his second volume of poems, Bring Me Flowers in April, succeeded in looking at the world and his home country through the eyes of his mother…

There are two motifs to April, here in the southern part of Nigeria: the preparation of the earth for light rain, and the accumulation and transportation of the debris of the year gone. April symbolises a double view through which life can be appreciated in all the forms it presents.

One thing is to see what should be seen; another is to make meaning of what is seen. Franklyn is remarkable, almost flawless, in the use of his mother’s love and death to paint us a picture of the country at large, and its effects on the social milieu and the sensibilities of those who are planted in it like the roots of a baobab on solid ground. The poet, through the love and death of his mother, here, invites us to see and make meaning of the corruption accumulated in the Nigerian state over the years, the corruption which everyone speaks of: painters, cobblers, the oppressor and the oppressed, writers, musicians and preachers, all alike.

The beauty of Franklyn’s work makes for such acts of speculative voice as it is for reawakening. To reawaken the social life of the country. The reawakening is the flower he calls for, seemingly, the mother he belies in the first poem: “Homecoming” / mother! / your children are still searching/ for the map to a wrecked home/ trying to salvage your lover’s name/ from the fragments of a burning flag/

To Franklyn, the thing to save – the debris/corruption – is the very thing seeking not be salvaged. By trial and error, by the very act or attempt at redemption in “Awaiting Nightfall” / … we plough the earth/ to grow memories/ and become burnt pages/ of this dull exciting book/. Franklyn’s use of the language of loss and its accompaniment, grief, accentuates value and beauty in each of the lines, deviating from the cliché-bathed poetry that has become the norm.

With a little of revolutionary din spread over a little of contemporary inclination, he compresses the oxymoronic rhythms into heraldic metaphors, quite musical, in an order only the lovers of soul music can appreciate as read in “Thank You, Felicia: “/ I was the sickly butterfly/ with broken wings/ falling to the ground/ from the strong arms of the wind/ you caught me/ almost breathless/

These lines from the poem “Parting Proverbs I” defines Franklyn as a sylvian poet whose works tend to the call against suicide. The corrupt state of things in his home country leans on such revolutionary instincts as emboldened by the courage to embrace death in its own cove. There’s a high rate of suicide, and looking at these deaths through the death of his own mother, Franklyn seems to have sojourned into her world, armed with the sense of the living, beautified the need to live in no ordinary way in: /… the egg in your hand/ do guide it safely to its nest/ it could someday hatch/ and bring forth a bird, an eagle/.

The urgency in these lines from the poem “Parting Proverbs I” has the same quality found in the poetry of most contemporary poets writing in this generation. What Franklyn has done here is not only didactic but therapeutic as well. This is the hallmark of great poetry, being not only a dressing of words but medicine given to heal, especially the dying.

In spite of the bulwarks formed against the art or act of dying, certain proclivities still persist. The urgent need to stay alive seems equal to the need to, sometimes, give in. In “Helium Balloon” Franklyn created such analogies in such striking patterns in just two lines of remarkable delivery: / there are days/ when my shadow becomes so heavy on me/ and I try peeling it off my sweltering skin/ so desperately/.

We each face such dilemma even in our confessions of the good life. It’s inevitable, the fall back to despondency. This, he heightened in the poem “The Weight of Memories” in: (in spite of everything) / I still find pieces of your shadows/ on this side of the crossroads/ like gravels in my hands/.

Franklyn, in Bring Me Flowers in April, succeeded in looking at the world and his home country through the eyes of his mother. With them as binoculars, piercing, and far reaching, the poet in him sees and interprets clearly in his own fashion the things that fault living.

The words in his postscript at the end of the book make for a fruitful journey into the heart of the work. In the postscript, there’s the most sublime call to give flowers over a cauldron boiling with knives, as against Charles Bukowski’s line about flowers and knives: “I’ve had so many knives stuck into me, when they hand me a flower I can’t quite make out what it is. It takes time.”

There’s the beauty of sharing champagne over petals, kisses over hate, love over war, roses over colours, and colours over the complex ideas of life. Franklin has chosen flowers over grief, and he is inviting us through his second volume of poems to choose life over death, flowers over knives, and give in bountiful measures the things that fall into what constitutes happiness, in spite of the corrupt state of things in the country. “Bring Me Flowers in April” is a handbook of love chosen over the diverse forms of grief.

Tares Oburumu is a writer and poet who writes from Bayelsa.