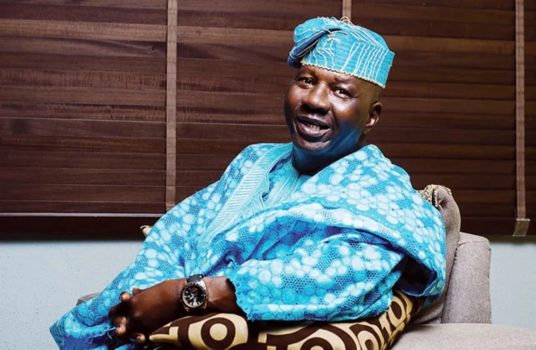 There are people who are so much larger than life that their impacts are felt across lives and even generations. They become household names. And whatever it is that makes them so beloved becomes part of a large network of memory lanes. When it is comedy that they are known for, in Nigeria, they have a special relevance. Life in this country is undeniably hard.

Comedy is how we, as a people, deal with our problems. It is how we escape. It fills us with calm, hope and optimism while providing us with a distraction long enough to forget our pain. In fact, it has aptly been said that laughter is the best medicine. And Baba Suwe, Yoruba comedian and actor, filled too many Nigerians with a lot of laughter.

More popularly known by his stage name Baba Suwe, the Nollywood veteran was born Babatunde Omidina on the 22nd of August, 1958. Although his hometown was Ikorodu Local Government Area of Lagos State, he was born and raised in Lagos Island and attended primary and secondary schools between Lagos State and Osun State. His career started when, in secondary school, he joined a theatre group called Osumare Theatre Group.

After a major stage play titled “Baoku,” the group gained popularity and moved to Lagos Television to perform their stage plays. Before long, after an impressive performance at Lagos Television, Baba Suwe was invited to perform at NTA Channel 7 and at the National Theatre. From there, he began to enter into the limelight.

Baba Suwe started acting as early as 1971/1972, but his first film/television role was in a weekly comedy series titled “Erin-Keke,” and he finally broke through as an onscreen actor in the 1990s after he played comic roles in “Omolasan” and “Iru Esin (Horse Tail).” In the latter film, Baba Suwe excellently provided comic relief to the heavily emotional Yoruba classic.

He soon became a pillar of the Yoruba movie industry. From “Baba Londoner,” “Oju Oloju,” “Aso Ibora,” “Ko tan si be,” and “Elebolo” to “#150 Million,” “Kowope,” “Larinloodu,” “Ayefele,” and “Adigun Oga Oga,” he starred in movies that are too numerous to keep count of. He also had his own production outfit, producing films such as “Alfa Nla,” “Ayedun,” “Baba Jaiye Jaiye,” “Eku Meji,” “Ojo Ale,” “Agbefo,” “Oju Oloju” and “Baba Londoner.”

With his signature blackened face and his unusual dressing that often involved wearing a dark sweater underneath his clothes, he established himself as a force to reckon with in the Yoruba movie industry, dominating the industry for decades. He was not unrivalled. Notable comic actors like Bolaji Amusan (Mr Latin), Ibrahim Bello Sanyay (Baba Lawori), and the late Tajudeen Akanmu (Koledowo) graced our screens in Baba Suwe’s time.

But even his rivals have admitted to his greatness, with Amusan  declaring him the greatest and most gifted comedian of his generation. Baba Suwe remained largely unbeaten until disaster struck, causing the “Erin-Keke” star to go quiet and start to fade away from our screens never to fully bounce back.

In 1995, Baba Suwe married Omoladun Omidina, a fellow comedian and actor who starred alongside him in many films, playing the part of his wife in most. Unfortunately, in 2009, Omoladun passed away, leaving him a widower.

Two years after his late wife’s death, Baba Suwe was almost wrapped in a scandal when he was arrested by officials of the National Drug Law Enforcement Agency (NDLEA) at the Murtala Mohammed Airport, Lagos, on suspicion of ingestion of cocaine. Despite being detained and, allegedly, subjected to inhumane treatment for weeks, no drugs were found on the veteran actor, and he was released.

In a lawsuit at his instance, a High Court sitting at Ikeja, Lagos, awarded damages to the tune of N25 million in his favour and against the NDLEA, in addition to the issuance of a public apology. However, the judgment was overturned by the Court of Appeal sitting at Igbosere, Lagos, on the ground that there was no evidence to support the lower court’s award.

Since the NDLEA episode, colleagues and persons close to the actor have claimed that the treatment meted out to him in detention was damaging to his health. Baba Suwe, himself, in an interview with Nigerian Tribune, stated that his “ailment started as a result of the unfair and inhuman interrogation” that he was subjected to by the NDLEA. In 2019 and 2020, rumours that Baba Suwe had died broke the Internet. But the “Baba Londoner” alumna debunked the rumours himself, rightfully describing it as surprising and disturbing.

On Monday, the 21st of November, 2021, when Baba Suwe’s son, Adesola Morenikeji Omidina, via his Instagram page, announced the death of his father, at the age of 63 years after battling with his health for quite some time, it still came as a shock, especially to those who could not imagine or remember him as anything but the interesting man full of humour and life. It is still unclear whether the NDLEA incident has direct links to the sickness that eventually led to his death on Monday.

Adesola told BBC Pidgin that the late Baba Suwe was a good father, entertaining even his children not just as a father but also as the comedian that he was. We cannot but be grateful for the good life and successful career that he had and for the fact that he died surrounded by family and loved ones.

It does take a special kind of dedication and hard work to stay relevant as an artiste for as long as the great comedian, Baba Suwe, did, especially in an industry as fast-changing as Nigeria’s. He will be remembered for the legacy he left, and the sounds of laughter ringing through living rooms across the country as his films and shows played on the home screens of countless Nigerians for over two decades.