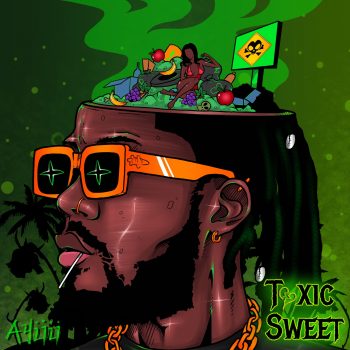 …the project keeps it brief, gets to the point, and takes you on a fun enough ride while doing so…

Ayüü (and, yes, the umlauted Us are important) has been one of the most prolific artistes from the Abuja contingent of the youthful Alté movement. With consistent releases since 2017, Daniel Ayu has carved himself out a pretty comfortable niche. His style is very unique; from his almost-nasal singing tone to his typical rapid-fire delivery that blends elements of Rap, Afrobeats, Dancehall, and R&B. While his sonic identity has not shifted too wildly over time, Ayüü has constantly developed his penmanship and thematic depth, continuously maturing into an artiste that is able to tackle emotional subject matters with sincerity, energy, wit, and a touch of playfulness. This is an ability he demonstrates in spades across his new project titled Toxic Sweet. 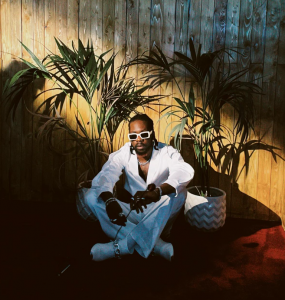 In his own words, “Toxic Sweet is an exploration into the duality of love and the complexity of human attraction.” This exploration begins with “Serpent,” a sultry track in which Ayüü likens this new lady to the serpent in the garden, tempting him with her “designer waist.” This song plays out the desires of a strictly physical relationship over sparse keys and tick-tocking drums courtesy of producer DOZ. The song is a fitting opener, kicking the project off with energy, sensuality, and Ayüü’s signature vibe-laden delivery. If one manages to get a slow whine to this song, it’ll be over relatively quickly as the project wastes little time before switching over to “Makarena,” the first single released off the project.

“Makarena” sees Ayüü tungba over tropical mallets, sizzling Latin percussions, and a strong, simple pattern. This song sees Ayüü show off the rapid-fire delivery I was raving about earlier. There are segments of this song where he unleashes playful lyrics with tongue-twisting dexterity. “If you see my mama hosanna, she tell her park her motor over now, I pack her, mover her, mute her informant,” he fires off with each line coming before you can process the last. His delivery is the energy and driving force behind this song. The melodies are constantly fresh, and they keep your ears guessing. This song makes for a delightful, uplifting listen, and is perfect for being left on repeat (which I did for longer than I’d admit on the record).

The title track, “Toxic Sweet (Self-Righteous)” comes next, and delivers the thesis of the project. “All we do is fight, but yeah we love it,” he admits. The beat is the softest so far with guitar trills and a deep bassline, drawing on the R&B-ness of the song’s content. Personally, I find the mix of the drums a bit overpowering, and find myself slightly relieved when they are pulled away. Their withdrawal allows me to really focus on the sweet melodies and solid song-writing that Ayüü employs to paint the picture of a paradoxically toxic relationship where the love he dreams of is only held together by drugs and passion.

(Read also: Why the Music of Johnny Drille Resonates with Nigeria’s Hopeless Romantics)

“Vice Versa Freestyle” continues down the softer path. We get swimming synths, and a subtle drum pattern. GJtheCaesar kicks the song off with brief yet poignant post-separation words. “Ain’t nothing out here better than me, so when you done with the streets, come lay on my sheets.” Ayüü follows this up with a hook that sounds so earnest and heartfelt. “I fucked up, no you fucked up,” he admits with a melody that places the listener emotionally in his shoes. There’s also a verse from Dopeman Twizzy that underwhelmed me a bit. His vocals don’t seem to sit in the space as the rest, sounding a bit muddled in depth and some reverb. Even beyond that, the lyrical content of the verse doesn’t quite sit on par with the rest of the song. However, the overall vibe of the song, and the fact that the title bills it as a freestyle, allow me to ease up on the cynicism.

“See your roses are black but your heart is darker,” is how Ayüü kicks off the next song, “Guns&Roses (QuestionYaHeart).” The pain of this song is evident in that first line. Backed by electric guitars and zouk-inspired drums, Ayüü recounts his suffering at the hands of a mystery lover who puts him through the wringer. This is one of my favourite songs on the project. I fall in love with a song when the artiste can put me in their shoes and have me sympathise and relate with the pictures they paint. That is an effect this song achieves to a great degree. All the elements of the song come together and make me “question her heart” alongside Ayüü.

“High Road” is a detour from the main themes of the project, as Ayüü jumps on a high-energy Afropop beat (produced by KC) to speak on having to take the high road upon receiving reproach from haters. “So many things wey dey talk about me, you go think say them pen jam for me.” While I enjoy the song as an isolated listen, it struck me as a bit of a straggler in the grand scheme of the project. While I don’t expect any project to focus exclusively on one subject, I think the project had done such a good job placing me in the mood for relationship drama and heartfelt songs, that the deviation was a bit jarring. That’s not to say there are no heartfelt moments in the song. Introspection and vulnerability are still on display as it takes honesty to admit, “sometimes I tire for the high road, I sabi say na set up,” as he does near the tail end of the song. 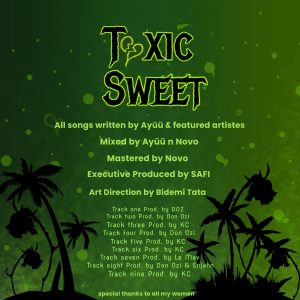 The LeMav-produced “2Müch” is up next and gets us back on topic. This is another favourite for me. LeMav finds his usual pocket of eclectic production with banging drums, heavy 808s, and playful keys. The song is really brief but it packs a precise punch. “Your toxic so contagious, it’s why I’m tired of arguing,” Ayüü admonishes in deceptively upbeat and summery melodies. This is another song that demonstrates the witty song-writing I initially praised Ayüü for. “Baby you’re too much, this your brain don dey too touch” is a line that cracks me up every time I hear it.

“H.M.T” (I assume this stands for How Many Times) hails from the hard-guy side of R&B with rattling trap hi-hats and speaker-bumping 808s. “I fucked up and gave too much, you came like insane in lust,” Ayüü sings as he uncovers his partner’s deceptions with prime throwback R&B vocals and harmonies. The delivery here is so unique and I would love to hear Ayüü break away from his usual and experiment like this a bit more often. The song also features Andrę Wolff, and once again, I find that the deeper-voiced guests seem to have a bit of trouble coming across clearly in the mix. Though it’s not glaring, it detracts in a few moments.

The project is rounded up with a sequel to “Toxic Sweet (Self-Righteous),” but this one is about “Assumptions.” The track is built on guitars that remind me of Styl-Plus for some reason. A deep bass and more zouk-drums complete the backdrop over which Ayüü admits that he is too quick to assume. This is the longest song on the project, and while it is not packed with lyrics, it further demonstrates strong song-writing and creates a clear sense of mood and atmosphere. “It’s taking a weight on my soul, my ex-box can’t be consoled,” is a line that would have gotten a laugh out of me if the mood of the song wasn’t also so sombre and subdued. The song wraps up the thematic threads explored throughout the project in the line “Ain’t nothing sweet about my toxic.” And while this song exudes sobering introspection, there is a hint of hopeful positivity that is the lifeblood of any romance on the rocks. 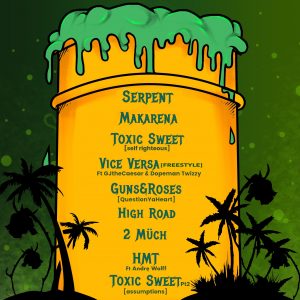 All in all, I think this project is a solid one. Beyond “High Road,” the whole project is cohesive and thematically tight. Ayüü employs different genre conventions to poke and prod at an emotional idea from a few different vantage points. While I think each song touched on the topics of love and toxicity, I would have hoped for a bit more depth and a more thorough exploration of the themes presented. Technically, the production serves the songs well. LeMav’s effort on 2Müch is the standout for me in that respect. Some of the featured artistes found their baritones a bit lost in the mix and some drums slapped a bit too sharply in my opinion, but the project keeps it brief, gets to the point, and takes you on a fun enough ride while doing so. It is a roller coaster of a project in the sense that it locks you in when it gets going, rises and dips in places, twists and turns with a few pleasant surprises, and ends with you looking back on it as a worthwhile trip that you could embark on a few more times.

(Read also: G-West and Ghanaian Satallion’s Collaborative Project, “Six Ways to Fall in Love,” is Worth Every Minute)