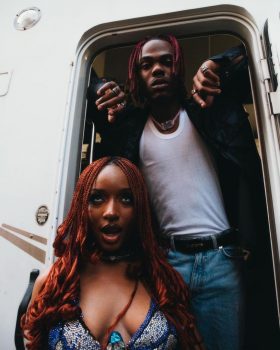 Ayra Starr is arguably the hardest working female artiste in Nigeria presently. Ever since she came into the limelight with her debut single “Away,” Oyinkansola Sarah Aderibigbe has been a revelation, and she is not showing any signs of slowing down anytime soon.

Starr is often referred to as Nigeria’s version of the late American R&B songstress, Aliyah, because of her unique style of vocal delivery and the signature Aliyah look, a combination of cropped tops on ripped velvet pants, red bandana and a pair of black shades. Signed to Don Jazzy-owned Mavin Record Label, home to super talents such as Rema, Ladipoe, Korede Bello and Crayon.

Ayra Starr teams up with yet another musical sensation, Ckay on this fiery track titled Beggie Beggie. Off her debut album 19 & dangerous, the song which was originally released in 2021 and produced by Louddaaa, London, Don Jazzy, & Andre Vibez centres around a lady who is trying desperately to win back the affection of her estranged lover.

In the visuals shot by Director K, a young lady, “Ayra Starr” is throwing a house party. Anxiously waiting for her boyfriend to show up, she calls him repeatedly on the phone but he refuses to pick up.

He finally arrives at the party, but not alone, accompanied by two other girls. An irritated and infuriated Ayra could not hide her displeasure as she walks up to him and tries to whisk him away from the arms of the other girls. She then takes him outside where she is seen dragging him over the ground with a rope tied around his neck, and tries to bury him alive.

Her cheating lover’s body is seen submerged halfway into the ground with just his head and hands out as she pours out her emotions at him about her hurt. Love is a beautiful thing and even more beautiful when the one we love reciprocates that same gesture. But when that love turns sour, the world could suddenly become a gaping pit that we wished would swallow us up.

I enjoyed watching some scenes, especially at the beginning where a group of young female adults are seen outside waiting to get into the party, but first lighting up a “blunt,” most commonly known as marijuana, their faces beaming with smiles and joy, depicting the camaraderie amongst young people in times of merriment.

Another moment which stood out for me was when an elderly man dressed in an “Aso Oke,” a Yoruba traditional attire, is seen in the same vicinity with these young women waiting to get into the party, but first giving wads of cash to a particular young lady as they both kiss and exchange pleasantries. The young lady is later seen dancing and rejoicing as she shows off to her friends the money she has just received from her sugar daddy.

This is a classic representation of what is prevalent in our society today: “sugar daddies” enticing young ladies with money as inducement to derive sexual pleasure in return. And Director K’s subtle way of giving us a morsel did not go unnoticed. Bravo to the Balon d’or video director for that one.

Director K’s use of a “shaky cam” at the beginning of the video was a brilliant idea, from a cinematographer’s perspective. Shaky cam otherwise known as “jerky cam” is a camera technique used by cinematographers to create the impression or the illusion of an unrehearsed, unprepared scenario in the mind of the viewer. In this case, it was the ideal camera technique needed in the intro scene to capture and illustrate indistinct chattering done by a completely unaware crowd.

Also, there were a few impressive shots taken by the cinematographer. Most notable was the extreme close-up shot on Arya’s boyfriend as he is being dragged across the ground to where he is about to be buried. There is enough emphasis on his face showing him in anguish and utter disbelief as he slowly but surely comes to grips with the sudden reality of his imminent end.

There were also what looked like a few crane shots, depicting what was happening on the ground from an aerial point of view.

The costuming lacked real art direction, or so it seemed, anyway. In what could be described as a mid- 90s raggedy themed party, some girls are seen wearing old school baggy jeans, and others, afro kinky wigs. Some guys wore turtle neck t-shirts on silk baggy trousers, while the rest just simply wore whatever they liked.

However beautiful and artistically motivated the concept of the video may seem, it comes at a time when many Nigerians have become very sensitive to matters relating to physical assault or any form of violence whatsoever due to the alarming rate at which similar horrific and disturbing scenes keep popping up on our screens.

The video demonstrates gross negligence or insensitivity on the part of the video director, and also the singer who is supposed to be a catalyst for advocating and imparting positive change by using her art and skill set as a tool to de-escalate and condemn what is already a colossal problem in our society today. Rather, she adds to it by depicting such cringe-worthy scenes and passing them on as the “cool” and normal way to respond to a broken heart. Now the question is: does true love seek revenge when betrayed or hurt? Should heartbreak be a justifiable reason to want to inflict harm or pain on another human being?

Ayra is still developing as an artist, and I have no doubt that both her and her entire team will improve from this and maintain the same standards and quality of visuals as her previously released tracks, Bloody Samaritan and Away. In all, the video is not Director K’s best work yet.

Omowale Michael Bokinni is a trained cinematographer and screenwriter. An alumnus of the prestigious Royal arts academy Lagos. Passionate about all things music, movies and entertainment  in general. He is also an actor who has featured in a number of Nollywood movies, most recent; the Royal arts blockbuster  “Bitter Pill”.