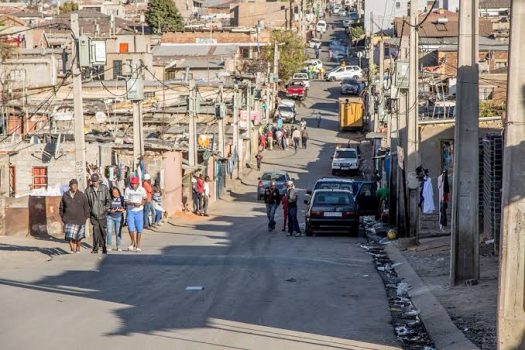 A Journey to Gwarinpa, Abuja

…as the sun steadily makes its descent in the sky, and you, having pushed any remainder of guilt and compunction to the farthest and deepest parts of your mind, make the twenty-seven-minute drive to that old estate in Gwarinpa, Abuja with its awful pink buildings and uneven roads.

It is a somewhat chilly evening in the capital city of Abuja. The familiar harmattan breeze, though a welcome relief from the near-unbearable warmth of the previous season, is characteristically composed of dry, dusty air, which sometimes compels a person to wind up the windows of their car or close shut those of their house.

But if one does not mind a little coughing, and is somehow immune to the occasional sneezing, then, one sees no reason for further squandering of petrol or electricity — especially during a time when both have become frustratingly and terribly costly — and proceeds to turn off all air-conditioning, opting instead for this cool and “fresh” late afternoon harmattan air.

You are one of the many who do not mind the dryness of the calm wind this evening, for you have your windows down, as the sun steadily makes its descent in the sky, and you, having pushed any remainder of guilt and compunction to the farthest and deepest parts of your mind, make the twenty-seven-minute drive to that old estate in Gwarinpa, Abuja with its awful pink buildings and uneven roads.

The estate is one you have shamefully become familiar with in the past months, for you have visited it far too often than you care, or even dare, to admit. Indeed, you are filled with a certain contrition and discomfiture each time you arrive at its main gates and the security guards regard you with some degree of recognition.

With music playing on the radio to dispel the cruel silence that would force you to confront your own penitent thoughts, you make the turn that leads to the house you are visiting, another old building boasting of peeling pink paint and white protectors over every entrance. You park a short distance from the white gate ruined by months, perhaps years, of unattended dust, retrieve your phone which was earlier tossed into the cup holder, and dial the number that you saved months before as “Dan (Work).”

“Hello? Are you here?” The voice at the other end of the line whispers when the call is answered.
“I am,” you reply, smiling in spite of yourself. “Come outside.”
“In a bit.”

But you have become rather versed in this routine by now, having been a wiling participant in recent times, and thus, are aware that “in a bit” can mean anything from five to thirty minutes. So, with a nod which cannot be seen by the person with whom you speak, you end the call, return your phone to the cup holder and lean back in your seat, closing your eyes as you do, the heaviness of your eyelids reminding you that you slept quite terribly the night before.

It has been some time since your brief phone conversation and you begin to drift off, the music becoming a distant noise in the background, as your mind starts its recollection of occurrences and encounters from a very long day at work. White walls and wooden desks fill your thoughts, staplers, suits and office banter slowly unfolds as you descend into what would ordinarily be a necessary power nap, but for the unusual images that suddenly replace those which you expect and accept — it is customary that your mind recounts your day in a series of images which lull you to sleep, but a picture of your wife in this moment, you simply cannot bear.

Oddly similar to the manner in which scenes might change in film, you watch with your mind’s eyes as the office break room is transformed into the neat and tastefully decorated sitting room of your childhood home, as a female coworker is replaced by the image of your mother as she was in your early years, in her floral patterned dress, its sleeves matronly long, its buttons fastened to the very top.

A memory from your childhood, you realise as the scene begins to play out. Your mother is young again and she wears the loveliest of smiles, in spite of the dark rings that encircle her eyes and tell of her tiredness — a possible result of her sleepless nights whilst her husband remains away, for many days at a time on occasion, returning with evidence of his indiscretions which he fails to, or does not care to, properly conceal.

With excitement bright in those dark-ringed eyes, she says to the young version of yourself seated by the centre table, your toys before you, “I’m off to the salon. I won’t be too long. When you’re hungry, let Margaret or your sisters know, alright?” And you nod, curiously watching your mother go.

The images in your mind shift once more and it seems your mother has returned from her little excursion, looking surprisingly different from the woman she was when she left you. Your child-self stares at your mother, stunned that even she who always seemed a most simple and conservative woman could be transformed into this creature of great beauty and sophistication before you. She wears her hair long and loose now, with curls that tumble down her back; her face seems different somehow, enhanced by powder and all sorts of facial paints which appear somewhat ridiculous on the sort of women you have seen your father admire, yet, manages to suit your mother.

She smells of hair products, like a woman recently groomed, and offers that lovely smile once more, though this time it is accompanied by an unfamiliar self-assuredness that you decidedly like. Your sisters are also a part of this memory, for they bound into the sitting room, upon hearing your mother’s voice, gushing and sighing over her new appearance as they do, and your mother seems to bask in it, and glow underneath the warmth of their praise.

“You look very beautiful, mama,” you, too, say to her and she lowers herself to hug you close. Even now, seated as you are, against the cool leather of your car, the harmattan breeze caressing your face, you imagine you can feel the deep affection in her embrace. Almost immediately, a frown presses your eyebrows together and forces lines between them, as you anticipate the following scenes of this recollection with annoyance, some degree of sadness, of regret. It plays on like a movie: your father’s return in the clothes he wore the previous morning, his gruff response to the presence of his children, and then, his reaction to your mother’s transformation.

Even now, it spurs within you, a certain emotion that you cannot immediately identify. You watch as he takes her looks in, his dark eyes appearing to sweep over the entirety of her physical form, and you do not recognise that look of love which television has taught you to expect when a man gazes upon his wife. In its place, you see something more akin to derision, hear the note of ridicule in his tone as he questions, “And what is this? Are we now playing dress up like little children, or is it clowns?”

Disappointment dims the light which earlier danced in your mother’s eyes, although, it is swiftly masked by a small smile she manages to call to her lips. “Oh, it’s those women at the salon. I told them all this makeup really wasn’t me, but they insisted on trying out something new and…”

“Well, next time,” your father interrupts, “don’t let them use you as their guinea pig. You look very funny.” Chuckling, he strides from the sitting room and she follows behind him, her steps leaden with sadness.

You realise now, that it was in this moment, all those years ago, that you decided you disliked your father, and you hated the manner in which he treated your mother. This young version of yourself is filled with such sadness on your mother’s behalf, your childish heart breaking for her. You vow, silently, to always make her and the woman you marry feel special in your presence; that you will never give them reason to doubt their importance in your life, nor cause them to lose their light, laugher and sense of self-worth. You vow to be a very different man from your thoughtless and uncaring father.

Thus, you wonder now, many years later, why you find yourself parked a stone’s throw away from the dust covered white gates of an old building, awaiting the arrival of Anita Danjuma (Dan (Work)), a woman who is neither your mother nor your wife.

You ask yourself why you have carried on a relationship with this woman for many months, why you have told yourself, time and again, that what your wife does not know cannot possibly cause her any harm, when you are aware, perhaps more aware than most, that women often sense these things even when they possess no proof of them? Have you become so callous as to not care that your wife might, like your mother, go to bed with tears in her eyes each night and don a mask of contentment, come morning, for the benefit of your children? Have you become your father?

A Journey to Gwarinpa family Home