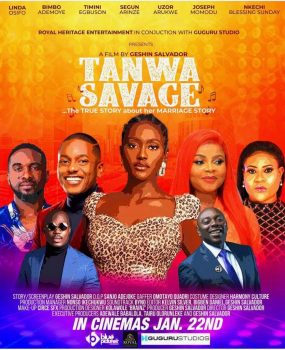 Besides being cliche and stereotypic, the Tanwa Savage script is not intellectually challenging, possibly as a result of being pushed straight from the factory to the studio with no final modifications…

Geshin Salvador’s Tanwa Savage portrays the story of a married couple whose inability to have a child leads to the husband’s infidelity, which ruins their marriage.

The comedy-drama centres on Jolaoluwa (Uzor Arukwe) whose desperation for validation to disprove his sterile medical state leads him to have multiple extramarital affairs. Things don’t go as planned for Jolaoluwa when he learns that his mistresses, Tosin (Bimbo Ademoye) and Ngozi (Nkechi Blessing), as well as his wife Zainab (Linda Osifo), are pregnant. He is in shock as they coincidentally break the news to him at once. The movie graced our screens with the likes of Segun Arinze, in the role of Jola’s father, Timini Egbuson playing Michael, and many others.

The movie strategically writes the three women in Jola’s life to be from different tribes. One would likely expect cultural affiliation, but it’s quite far from that.

With leads from the movie trailer, Tanwa Savage would most likely be passed off as a comedy. However, the movie struggles to decide if it wants to be a serious drama or a comedy and doesn’t quite succeed as either. Tanwa Savage has a lot of loopholes that leave the viewers confused. These loopholes are caused by the uncoordinated script and misplaced flashback techniques used in the movie.

Besides being cliche and stereotypic, the Tanwa Savage script is not intellectually challenging, possibly as a result of being pushed straight from the factory to the studio with no final modifications. Geshin Salvador, the writer of the screenplay, also happens to have directed it, therefore possibly leaving no room for external criticism on the movie. This is not surprising as he has done the same with his other movies: Love and a Tragedy (2020) and Kukoyi (2021). The incoordination of the script made a mess of the whole movie, leaving it without focus or direction, and making it impossible to achieve its most vital purpose of communication. Although Salvador didn’t do a bad job, it is in my opinion that a fresh pair of eyes on the set could have made a difference.

The movie gains extra points for the acting, cinematography, and camera angles. The constant banter amongst the women did bring to light the comedic aspect of the movie, and those scenes gave us a good laugh. Although mostly unnecessary, they are good incentives to keep you watching.

Many scenes in the movie degrade the advancement and growth the Nigerian movie industry has been working so hard to achieve. There was this scene where all the pregnant women kept screaming at night as though in trouble or pain to get Jola’s attention. That part could have either been scrapped outright or made to look more realistic. The scene also cast light on the substandard props on the women: the baby bumps looked unreal, almost like they were carrying a toss pad underneath their dresses. For a movie of this sort, it was quite a dreadful sight to behold.

The movie had a few hilarious scenes that will shock you with the unexpected. Of note is the scene about Jola’s father bringing a maid to help out in the house. I was shocked seeing who he had brought, a lady who looked nothing like a maid. And afterwards came the scene Ngozi’s baby’s paternity is revealed — quite a jump, if you ask me — almost as though the scene was trimmed to adjust the movie length creating a void in the mind of the viewer. That aside, we still cannot seem to see nor understand how exactly Jola got involved with Ngozi.

Zainab created an unrealistic reflection of a classical Nigerian woman, allowing a friend into her home because she came from the same tribe as her husband.

The flash-forwards, flashbacks and transitions towards the end of the movie did nothing else but further aggravate the confusion. Zainab went from having just given birth and talking to Micheal, to having a five-year-old and already pregnant for another, then back to demanding a paternity test. And then having flashbacks in a flashback? This movie has all shades of confusion written all over it and this obvious absurdity creates a room of opportunity for blistering attacks on the production team.

However, Jolaoluwa’s character was far-stretched yet impressive as he did not break along the line, showing applaudable theatrical presence in every one of his featured scenes in the movie; a good thing Salvador had the best man for the job. For Segun Arinze, being a true veteran in this industry, he was able to fix the possible glitches on his part.

Not leaving out Timini Egbuso whose character, Michael, is quite predictable, owing to Nollywood’s constant typecasting of Egbuson with little to no room for growth or change. He’s either the lover boy, playboy, “Yahoo boy,” or spoiled rich kid. Michael is no different. His character was underdeveloped, making his relevance in the movie quite unclear.

The movie doesn’t give you much to hold on to, making it easily forgettable. Tanwa Savage is a good story destroyed by terrible scripting, myopic directing, and tatty editing, making the movie rather pointless. The movie could have been better if structured better to tie up loose ends, and cut down on the excessive and inessential use of flashbacks. Also, the actors would have done a better job if given room to explore their emotions and defend their actions, not just disappearing from the screen with no sensible explanation.

Thankfully, this movie doesn’t run extensively as only a patient person (a critic in this case) can sit through its running time. Unfortunately, the famous faces in Nollywood featured could not save this film from itself any more than their acting skills already tried.