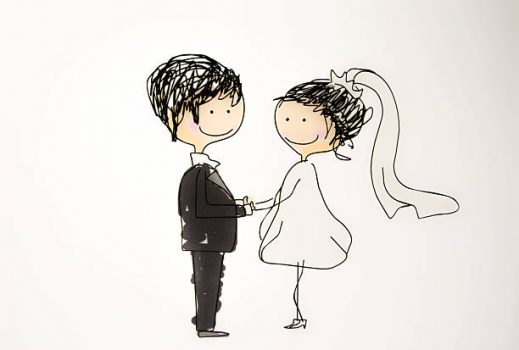 This came days after the Nigerian maverick rapper, M.I Abaga, announced his engagement to the internationally-recognised strategist, Eniola Mafe. Abaga is forty years old, and Mafe is 37…

On average, the age at first marriage according to The World’s Women 2015 is 25 years for women and 29 years for men. But in Africa, cultural and religious institutions recognise acceptable ages for women to get married as, at least the legal age of 18 years, and the prime being the 20s. Anything older, and it appears that the female has passed her prime. For men, it is not so specified, and they may be allowed the leeway to choose to get married only when they are ready, even up to 40 years. It is believed that men can wait until they are mentally ready before making the big decision.

Many, however, forget that marriages are life-long decisions that should build ties between two compatible individuals; a union one ventures into from choice rather than a fulfilment of societal obligations or milestone achievement. The decision to wait should supersede societal expectations for individuals.

I’m always amused by Nigerians who make it seem like a woman in her 30s is old and approaching the end of her prime. Sorry, what? Some of us are just getting started 🤕

However, there has been an increasing change in the age of first marriage, especially in Africa.

In January 2022, the 42-year-old Nigerian movie director and producer, Kemi Adetiba, got engaged to the Ghanaian-Nigerian creative, Oscar Heman-Ackah.  Similarly, 46-year-old Nigerian actress, Rita Dominic, announced her engagement to her fiance, Fidelis Anosike. This came days after the Nigerian maverick rapper, M.I Abaga, announced his engagement to the internationally-recognised strategist, Eniola Mafe. Abaga is forty years old, and Mafe is 37.

It seemed like the season for love declarations and engagements for Nigerian celebrities, and I find this a positive representation, especially as celebrities can easily become role models for ordinary and regular folks to emulate.

In Africa, individuals usually ponder with dread on the thought of growing older. Asides the responsibilities and black taxes that come with growing older, the chances of gaining employment and job opportunities reduce with age. The other day, I made a casual joke about being past the official age for an entry-level job in a bank in Nigeria. For persons older than 40, there may be concerns about health, having a lack of skill, stereotype about not being digital or tech-savvy, or being difficult to train. And when it comes to marriage, the stereotype increases for older unmarried individuals.

Age stereotyping, age shaming, or ageism is the discrimination of others or against oneself based on age. While sometimes the stereotypes may be positive, such as being older and wiser, there are also the negative stereotypes of being out of style, or incompetent.

Many people have been at the mercy of trolls on and off the Internet. People have formed opinions about getting older and being unmarried. From personal experience these days, during reunions with old acquaintances, people first ask about my marital status before asking about my other accomplishments. One even made a comment about a “ticking biological clock.” While, for some, especially women who have passed their mid-20s, this may become a reason for concern, many are now opting to wait till a later time to get married. A study suggests that people who marry at a later age build longer-lasting marriages than others that marry at an earlier age.

Trends show that the average age for getting married in developed countries tends to be higher in comparison to other underdeveloped ones. Also, the age between partners tends to be (but not necessarily) smaller in developed nations than in developing nations. This means that in developing countries, marriage is tied to the economic benefits it presents to the individuals, especially females, rather than to the need for companionship. One can, thus, attribute this trend to changing times, and a shift away from cultural and religious norms.

In the African context, people marry primarily to fulfill cultural obligations, as well as for procreation. In the past, it was common for young adults especially in rural communities to get married and have children. But nowadays, with the economic uncertainty in African countries, young adults are narrowing the prospects of marriage until they can boast of more financial security. Also, with more educational and career opportunities available to women, they can decide to wait longer before deciding to get married. A 2019 statistic showed that women in South Africa averaging 33 years are choosing to marry at a later age than their parents and grandparents. According to the study, this change was because modern women had more opportunities afforded them now than in the past. Some, however, may consider this a disadvantage, as there is still a stigma associated with being older and single. This is because of stereotypes that have been created around marriage in Africa and perpetuated by the media of single persons (mostly women) being unhappy until they find a partner.

These days, culture, religion, and tradition take lesser precedence than choice. Africa has one of the largest communities of religious believers around the world. And there’ll be even more numbers of believers from Africa in the coming years.

But on a global level, young adults have been observed to be less likely to be religiously affiliated, or invested in core traditional values. This somewhat takes away the pressure that may be imposed by laid-down customs and religious beliefs.

These said, people are opting for other kinds of unions like cohabitation. One may question this trend as a deviation from morality or uprightness, but the decision for preferring to cohabit comes from fear of divorce in the future as there is usually the panic that the union would eventually collapse. Although whether or not divorce rates reduce with cohabiting is debatable.

In Africa, there are strong sentiments attached to getting married, especially as early as possible. But the social and economic sense of individuals across Africa is also changing. With people preferring to form long-lasting relationships based on love and mutual understanding. And so, people should be pressured less to settle down early and should not be prejudiced for choosing not to.